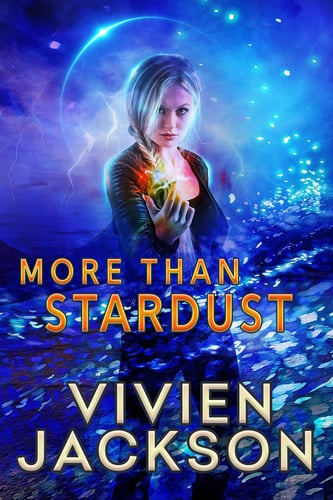 What I find so compelling about More Than Stardust is that you can read it as either a romance novel or a traditional sci-fi novel, tackling some interesting questions about love, sex, conscience, and consciousness. Chloe “woke up” only after her programming did some pretty awful, literally earth-shattering things (prior to the opening of the book), and she feels guilt about those actions. Despite being a robot, she also feels love, and struggles with the difference between herself and the meat-sacks around her.

Being a romance novel, some of the tension of this is also dissipated by knowing you’re going to get your HEA. There are some classic sci-fi tropes employed here to great effect - the “robot” has some tough choices to make (care for the humans or ally with the machines?). Fractured and independent AIs generate a conversation about the nature of free will and whether or not a conscious robot is any different than a human. But one way or another, we know Chloe and Garrett will be together again.

The central tension comes as Chloe looks for a body, which is also fortunate for those of us looking for some physical contact between the hero and heroine, which Jackson does well (I will point readers back to my admiration of the car scene from the first Wanted and Wired entry). Fortunately, her gaining a body also stops me from continuing to envision her as the babysitter from Saga. It should be noted, however, that her first attempt to obtain a body goes very poorly for her, and takes her to some pretty dark places (figuratively and literally). See the content warnings - they’re pretty much all crammed into the second quarter of the book, even if Chloe has her own unique ways of dealing with them and with the villains.

Overall, I was a fan of how the book wrapped together the prior installments nicely. The characters from the other books made appearances when they were appropriate, and so we got to continue to see how their stories are working out. Dan-Dan (Angela Neko’s husband-android) in particular is noteworthy, as it gives us a pretty awesome set of interactions (personal, heroic, and sexual) between Garrett, Chloe, and him.

Overall, if you liked the prior Wanted and Wired novels, you’ll probably like this one a lot, too!

Matt received a copy of this book from the author for review.