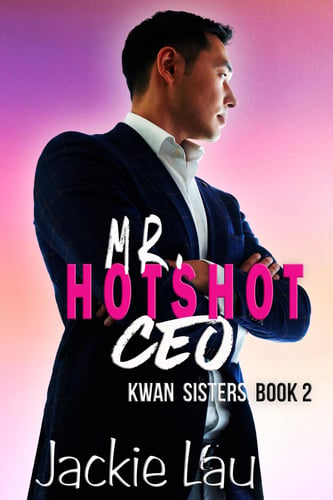 As CEO of Fong Investments, I’m a busy man. In fact, my family claims I’m an obsessive workaholic, and when they force me to take two weeks off, I have no idea what to do with myself.

While brooding over an espresso, I meet Courtney Kwan, a biomedical researcher who savors the little things in life. And, suddenly, an idea strikes me—I will pay this woman to teach me how to enjoy my vacation from work.

Soon, I find myself doing crazy things like baking cookies, reading for pleasure, buying a phallic cactus, and falling in love. But Courtney is dealing with some serious issues of her own, and I fear that when I return to work, I won’t be able to give her what she needs, and I’ll lose her forever…

Here's the thing about 2018: I have a NEED for rom-coms and really absurd paranormal or sci-fi bananapants books. I don't want to read about someone's emotional journey through depression and how they learned to love life and blah blah blah. I need to get the hell out of present day United States of America.

My absolute love of Jackie Lau's second book, Mr. Hotshot CEO, is a prime example of why no one should listen to what I say. The heroine lives with depression, and it's a major theme in the story. The hero's father recently suffered a heart attack and he's working 16 hour days to pick up the slack. All this, but it's a rom-com? Yep.

In a move that only makes sense in a romantic comedy, CEO Julian Fong spots scientist Courtney Kwan enjoying a gingerbread latte and hires her to teach him how to enjoy the two weeks off his family is forcing upon him. Naturally, she has to live with him during that time because she's still going to do her regular job. The entire setup is funny, between Julian's nosy, interfering family (his grandmother threatens to bring a different woman to his office every day until he marries one or takes a vacation) and Courtney's assertions that she's the absolute worst Manic Pixie Dream Girl.

It's this humor, plus some pretty intense chemistry between the main characters, that balances out one of the most realistic depictions of chronic depression that I've ever read. Lau wrote a bit on Twitter about how her own depression manifests, and how this book is intensely personal for her. It shows. While every person's depression is different, Lau walks that line between universal and individual, helping the reader and Julian understand what Courtney is experiencing. The conflict in the novel was believable, as Courtney and Julian are both grown adults who know their own minds quite well by this point in their lives. They're both single for reasons that make sense, reasons that make it unlikely that they'd both toss everything aside to be in a relationship.

If you read Grumpy Fake Boyfriend, you'll recognize Lau's humor and characterization, but this book has something of a deeper undercurrent. In GFB, we saw Naomi embracing introverted Will's need for alone time. In Mr. Hotshot CEO, Julian has to overcome his innate desire to fix things and  work with where Courtney is and what she needs. The moment when he convinces her that he can be who and what she needs? I cried. I cried ON A PLANE. Not the sad sort of crying, but the kind of cathartic weeping that only comes when you've been validated in a profound way.

Lau weaves in details about Chinese-Canadian communities and family life, characters from past (and maybe future!) books, and a whole lot of food. There's so much food that Bawdy Bookworms did a "Pleasure Pairing" about it!

If you haven't read one of these two books yet, I really encourage you to start. Lau is probably my favorite new-to-me author this year.