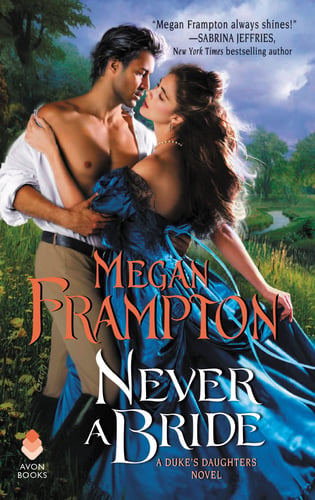 The next thrilling installment in Megan Frampton’s scintillating A Duke’s Daughters series.

After twelve years in Her Majesty’s Navy, Griffith Davies must leave his sea-going life of outrageous freedom behind, forced to rejoin London society as the heir to the Duke of Northam. But though he is now shackled to the land, he has no desire to wed some innocently dull young thing.  Who best to shield him from the matchmakers than a woman as notorious as he?

Lady Della Howlett’s reputation was tattered years ago, so entering into a false engagement with Griffith is hardly going to make matters worse. What’s one more shock to the ton to set their tongues wagging? And this pact certainly has its pleasures; the passion Griffith commands in her goes well beyond their agreement. Could her feelings might be more honorable than she’d first imagined?

Soon, Griffith and Della are arousing more than scandal, they’re courting heartbreak.  And more than their reputations could still be at risk.

After my self-imposed exile from romance (I needed a refresh)*, this was one of the first romances I read. And reading Never a Bride was like rushing back home into a warm embrace. There was my current favorite trope: fake relationship. There was a woman who refused to apologize for what she wanted and deserved.

And there was a hero who took the time to understand the heroine. Frampton excels at writing heroes who care enough about the heroines to do this. Not only is Della's, pleasure of the utmost importance to Griffith, but so is a feeling of acceptance and comprehension. He never rushes her or demands something of her. Della doesn’t have to do the emotional labor for two. Griffith is a partner for her almost from the moment they meet, but definitely when they strike their bargain.

To complicate this bargain (she pretends to be his fiancee to keep ambitious women away from him, while he helps find her best friend’s husband who has gone missing), they both lean into their attraction and embark on an affair of the no-feelings variety. This obviously does not work as planned. Feelings are caught all around and their friends and family see it long before they do.

Something I loved was that Della brings the most baggage to their relationship, having had a child out of wedlock, so when she discovers her feelings for Griffith, she is the one to panic about what it means and if she wants that. Never once does Griffith or the book shame Della for leaning into her desires. She is allowed to enjoy sex, to know that she enjoys sex before even meeting the hero, to reconcile that running away was a mistake that wasn’t really a mistake because she got her daughter and a best friend because of it. Never a Bride never shames Della for asking for what she wants, and nor do any of the characters she cares about. Not even Della worries about what she wants because she has learned not to compromise her needs to fit expectations. And I loved her.

Never a Bride could easily just be about family and sisters (like the previous book, The Lady Is Daring), but instead of re-enforcing that, it’s about a different sort of family. After her scandal, Della created a family with her friend Sarah and their children. Instead of this relationship falling away now that Della has returned to London where her sisters are, her friendship with Sarah is even stronger. She confides everything to Sarah, including Della’s plan to have an affair with Griffith. Similarly, while Griffith’s relationship with his cousin, the duke, is important, the people he needs closest to him are the men from the ship he captained.

To paraphrase a negative review for this book that I saw on Goodreads, if you’re looking for a feminist historical romance, Never a Bride will serve you well. And the luxury of finding an author with a backlist is that you have long list of reads to fill in the time that you are waiting for their next book. And I’m 100% eagerly awaiting the next Frampton.

* Also some very long audiobook holds came in and I had already waited eight weeks for them...you know the story.

Content warnings: a secondary character is sick (presumed dying) of an unidentified illness, slutshaming directed at the heroine, crappy parents, threat of blackmail

Margrethe read this book on audio from her library.