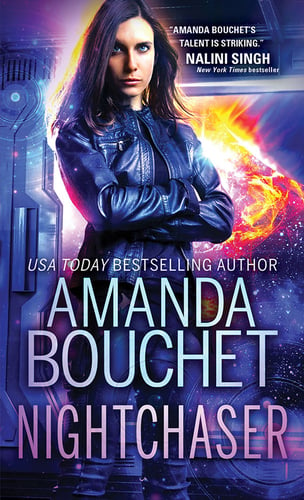 Tess Bailey (our heroine) is the captain of a small ship, the Endeavor, which liberates medicine and other necessary supplies from the Evil Empire, in order to aid the Scrappy Rebels and an orphanage. Within the first couple of chapters, one gets the sense of a heroine who is a cross between Malcolm Reynolds of Firefly (with a dedicated crew and shady smuggling business) and Catalia, the heroine of Bouchet’s first trilogy (they have similarly awful parents). It doesn’t take long, though, to recognize that Tess is a much more empathetic, much less jaded human than Mal Reynolds is, and her story takes a twist that takes her backstory in a much different direction than Catalia’s. She has the chance to really shine independently of either of her possible progenitors.

The main thrust of the conflict is actually interior to the hero of the story, Shade Ganavan. Tess has managed to earn an enormous bounty on her head, and while on the lam, contracts with Shade to repair her ship. Once he realizes that Tess’ bounty is worth more than a small city, he spends the next week trying to decide whether or not to turn her in. This results in a much more slowly paced novel than I’m used to out of a sci-fi adventure, as there’s no imminent exterior threat. It almost reads more like a high-tech contemporary than a sci-fi thriller, which a rich development of the characters’ internal lives. That’s not a strike against it - I like contemporaries, and I think it’s well done here. We also get alternating PoVs between Tess and Shade, which is a lot of fun.

Overall, I would strongly recommend this book. The worldbuilding is not quite as comprehensive as the Kingmaker Chronicles felt, and I don’t feel nearly as attached to Tess’ crew as I did to Griffin’s, which is a problem during a major moment near the end. The tradeoff is that we get much more insight into the main characters’ motivations. I’m also glad it avoids some of the weird consent issues of Catalia and Griffin from the first book in the Kingmaker Chronicles. One villain in the series feels very much like a paper doll when we first meet him, but though I still think he’s an ass at the end, we can at least see where he’s coming from. That sets him up to be a much better villain in the next book (I’m sure we’ll see him at least once), and I’m eager to see how the story plays out between the Rebels and the Empire.