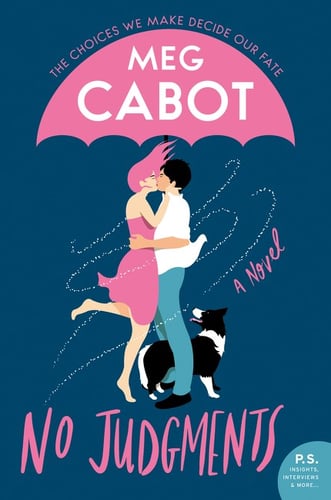 Review: No Judgments, by Meg Cabot

No Judgments is two different books smushed together. One part is a fluffy tale about two stubborn people coming together during a hurricane and then rescuing animals in the aftermath. The other part is about a woman who's just run away from a toxic relationship and family. I'm going to give spoilers in this review, so if that's not your thing, go ahead and click away now.

Here's the everything-in-the-fridge soup that is this book:

- Hurricane, but people choose to stay and they're all fine! No mention of Maria, but this one is conveniently named Marilyn... Oh the privilege of these characters. Her family offers to fly her out by private jet but she chooses not to evacuate. I get not wanting to go with her ex (see below) but her family offers to put her somewhere far from her family or her ex, so I just... ugh.

- Parental death prior to the book followed by heroine finding out that her mother isn't her bio mom (which is a stupid subplot, because all it means is they used an egg donor due to fertility issues)

- Town drunk who abuses his dog, hero punches him and takes the dog. It's clear the police keep taking the guy to the jail to dry out and then letting him go

- Emotionally abusive ex, laid out for you in the blurb

- Sexual assault by ex's best friend, followed by no one believing her

- In the last 10% of the book, the ex and his best friend pretend they are a family who have pets at X house but surprise! it's really an "apology" and an attempt to get her back

- And the heroine confronts her attacker with a gun, so that's great. She actually discharges the weapon (at a bottle of tequila) in order to get him to lay on the floor. The trauma of this situation is never mentioned. She doesn't have an adrenaline come down or anything, which I had assumed to be the bare minimum. It's like a switch went off and she went from being survivor to attacker, which was not great even though I could tell the author was trying to make the character feel safe while getting closure. But she needs a counselor, not to wave a gun around? (She's lucky he didn't get the gun and use it against her... Wow I hated this sudden tonal shift.)

- Mom is a conservative talk show host a la Judge Jeanine and the hatred she spreads is not addressed as anything more than "Mom, your show makes its money off telling people the world is bad."

So you've probably sorted out that I didn't love this book. Like I said, it's really two totally different books smashed up. The whole thing felt book-ended by trauma which was never addressed in a healthy way. We know that the heroine couldn't sleep at night, that she is afraid of sex, etc. But Drew is magical and these are never problems in their relationship. (It has been three months.) To my knowledge, Sabrina (Bree) never got therapy, but she did move from NYC (the city is evil) to a Florida Key, dye her hair pink and change her name. These are proven strategies for recovering from grief, sexual assault and emotional abuse.

On top of this, it's boring? When I wasn't angry at this book, I was crawling through the pages. It took me a week to read and a solid four days to get to 24%. I'm not sure if it's that I don't click with Cabot's adult writing voice or if there's a serious pacing issue, but it was a slog. It could be that Cabot was setting up the series, introducing us to the town and island as a whole, but we spent a lot of time before the hurricane, very little time during the hurricane, and more than 50% afterward. I love animals, but a huge section of plot was about going to houses and finding different types of animals. Cabot chose to spend all this time on feeding different kinds of dogs, but no time on healing a human from trauma. I guess waving a gun around is supposed to have healed her. Mr. Wonderful stands outside the house while this is happening, as though he knows for sure after knowing Bree for all of three months that she wouldn't actually kill the guy. The whole thing was unnecessary.

I guess I'm going to recommend it only to people who need to read everything Meg Cabot has ever written. I'm sure it will sell and I wish you all good luck.

Suzanne received a copy of this book from the publisher via Edelweiss. As you can tell, that didn't influence her review.

Content Warnings: sexual assault (she escapes by promising to go out with him? I can be more specific if you need, email me), emotional abuse, mom is probably a Trump-er, gun violence, animal abuse, hurricane, gaslighting