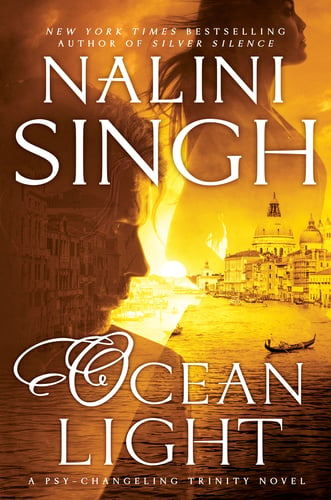 Veronica Scott is a sci-fi romance author, but she's also a dedicated SFF reader. (If you haven't caught her monthly Sci-Fi Romance Best Bets column, the June one went up just a few days ago.) Today she's here with a guest review of Nalini Singh's Ocean Light, the latest in her Psy-Changeling series!


Nalini Singh’s Psy-Changeling series has been one of my favorites for years. I love the way she constantly introduces new elements and characters to keep the story telling fresh. One storyline I’ve been impatient to read is that of the BlackSea pack, made up of ocean going Changelings. We’ve had enticing glimpses in recent books as various pack members showed up in the action. In Ocean Light (Psy-Changeling Trinity), the intriguing pack is front and center and they do not disappoint.

In the Psy-Changeling world, the shifters, the humans and the Psy form an uneasy civilization, more dependent on each other than any of them want to admit. The Psy tried to eradicate all emotion and exist on logic alone, which led to many unfortunate circumstances that the world is only now emerging from.  Humans are often seen as the weakest of the three races and perhaps even taken for granted to some extent by the others.

Bowen Knight is the Security Chief for the Human Alliance (HA) and he’s had a special chip implanted in his brain to prevent Psy from being able to take him over against his will, which Psy have been known to do to humans in a misuse of  their incredible and varied mental powers. As the book starts, Bowen’s barely survived his successful effort to thwart an assassination attempt against his sister Lily. He awakens in a BlackSea facility, being tended to by two Changelings, and is informed the chip in his head is degrading and going to kill him. There’s a 5% chance that a new medical protocol can save his life and stabilize the chip. Otherwise he has only a few weeks to live. Bowen immediately agrees to be the guinea pig, hoping others in the HA with implanted chips will also benefit from the research.

Kaia Luna, who is the facility’s cook, the doctor’s cousin and a much beloved pack member is helping to take care of him.

Bowen is a hard charging, dangerous man, who prioritizes humans above everything else.

Kaia is a warm, nurturing Changeling woman with buried traumas, who hates humans.

These two would never find common ground ordinarily but Bowen is forced to remain in the undersea facility to undergo all the detailed medical procedures relating to the deteriorating chip. Cut off from his normal 24/7 activity running HA, he slowly relaxes and begins to take in the wonders of the ocean, as well as interacting with the Changelings and gaining new understanding. He’s been strongly drawn to Kaia since the moment he awakened and she’s having an equal amount of trouble maintaining her hostile demeanor to him.

I really enjoyed the glimpses of life among the BlackSea pack. I love the leopards and the wolves (the Russian bears in Silver Silence were a bit overwhelming to me) but it was fascinating to see how the author presented new types of changelings and their behaviors in the human form. Don’t ever ask a Changeling what they change into, by the way – that’s apparently quite the etiquette faux pas. Kaia waits until very late in the book to tell Bowen (and us) what her shape might be, although there are intriguing hints and clues.

Neither can forget the ticking countdown clock of Bowen’s life and the resulting tension stays amped up through the book. Will the radical new procedure succeed? Is it fair or wise for either of them to pursue their incredible mutual attraction? I’ll just say the dictates of the heart rule, with some daunting bumps in the romance along the way.

In the world above, events continue to unfold, with some of the farflung and solitary BlackSea pack members going missing amid allegations that Bowen’s HA is involved in their disappearance.

The Psy take more of a backseat in this book – the author’s Psy Arrow super soldiers are my personal favorites in the series – but some old friends appear. No spoilers!

There are wonderful new characters as well, including a wise 200+ year old sea turtle Changeling who’s everyone’s adopted grandmother – can she be mine tool?

All the events, secrets and buried traumas come together in edge-of-the-seat fashion, which author Singh does so well. I stayed up late into the night reading this latest entry in the series (even dreamt about it!) and loved the ending. I can’t wait for more Trinity stories and am a very happy, if sleepy, reader today.