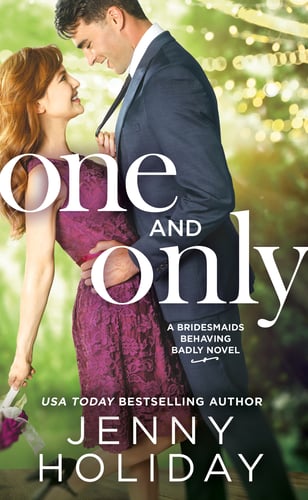 Miss Responsibility meets Mr. Reckless
With her bridezilla friend on a DIY project rampage, bridesmaid Jane Denning will do anything to escape - even if it means babysitting the groom's troublemaker brother before the wedding. It should be a piece of cake, except the "cake" is a sarcastic former soldier who is 100% wicked hotness and absolutely off-limits.

Cameron MacKinnon is ready to let loose after returning from his deployment. But first he'll have to sweet talk the ultra-responsible Jane into taking a walk on the wild side. Turns out, riling her up is the best time he's had in years. But what happens when the fun and games start to turn into something real?

Review: One and Only, by Jenny Holiday

Jenny Holiday's ONE AND ONLY is one of those books that leaves you smiling at the end. It's full of elements that are delightful on their own, but combined make something full of hope and joy and laughter. And hot sex. That, too. Jane is a YA fantasy author who cosplays Xena at one point in the book. XENA. This line is what got me to pick up the book, but I stayed for a bunch of reasons.

The Wedding Hijinks and Female Friendships

I'll be honest, I usually hate Big Weddings in romance novels. I worked weddings for years as a banquet server and captain, so I've seen just about every way it can go wrong. This wasn't that, though. This is the first in the series, so Holiday has some work to do setting up the four friends at the center of it all. Wendy, Jane, and Gia are bridesmaids and Elise is the Pinterest-addicted Bride. I won't say she's a Bridezilla, since she's mostly nice through it all, but she is increasingly stressed out and channels her anxiety into a series of comedic craft projects that the bridesmaids have to help out with. One project, however, is "babysit the groom's brother." Jane, the responsible one, is tasked with the job.

The groom's brother, Cameron, has a bad reputation. He's known for burning down a barn and getting a girl pregnant in high school. And that's all before he's dismissed from the army. Spoiler: there are good reasons for all of these stories and Cam is a really good guy. He's been trying to change his life for the better, but did spend some years living down to everyone's expectations of him. It's an interesting exploration of the assumptions we make and how they affect our relationships.

Cam has PTSD from two different events during his two tours, but it's handled with care and didn't feel like a plot device. Both of my brothers served in the US Marines, so I don't usually read military heroes for fear of fetishization. This wasn't that.

The biggest reason I stayed? Jane! She loves fantasy worlds, both writing them and playing in those written by others. She's practical and responsible, due in part to an alcoholic father who died when she was young. She's a little insecure, in the ways most of us are, but she's smart and kind and funny and awkward and I want her to be my best friend.

There's a lot to love in ONE AND ONLY, from exploring Toronto's landmarks to I-Don't-Have-A-Condom sexy creativity. The timeline of the book, starting just over a week before the wedding, gives a framework to the story that adds a little suspense and an expiration date you don't want to arrive. Jane and Cam are the sort of characters you can root for and I can't wait to see what Holiday does with the next two books!