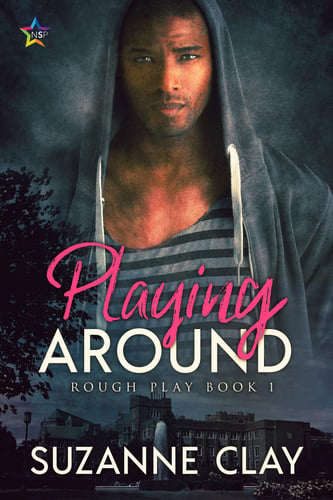 Logan and Christian have been best friends since kindergarten. After spending their entire childhoods together, it makes sense they would go to the same college: the first step toward making their futures intertwine forever as blood brothers.

But being away from home means discovering freedom Logan and Christian have never had before, and their journey of finding who they really want to be—and how they want to fit into each other’s lives—is a messy one.

Playing Around by Suzanne Clay is an extremely diverse book. Two main characters are POC, one of their roommates is of Asian descent, and one of the relatively important characters is trans. The college where the story is happening is very liberal, in contrast to the hometown of the main characters, where the population is … all white.

It’s liberating for the two best friends to come to college together, and realize how much bigger and open the world is. We are shown this almost immediately when a roommate, Daiki, tells one of the main characters that the whole state isn’t as white as the guys have thought, based on their hometown. And it’s not just in terms of race, we are also introduced to how homophobic the whole environment is. So it is not weird that Logan and Christian are so adamant they are just best friends.

They both start dating girls, which turns into a group scene where the two couples enjoy themselves. However, this is the catalyst for Logan and Christian to start doubting their friendship. While Charlotte, Christian’s girlfriend, is fine with it and actually suggests they do it again, Kelly Anne, Logan’s girlfriend, is firmly against it, and says that if Logan is bi, this means he will eventually cheat on her.

Charlotte and Christian continue dating for a while, with Charlotte actively supporting Christian’s exploration of sexuality with Logan, and telling Christian she’s ethically non-monogamous. While I liked the fact that Charlotte was very understanding and even gave Christian the little push he needed to do things with Logan, I think it might have been dragging for too long. Eventually she does break up with him, but explains it is because she wants him to sort out his feelings for Logan.

My main problem with the story was Christian’s ghosting of Logan. The guys have been best friends for more than a decade and yet they don’t talk at all. They fool around and have all the semblance of the relationship and yet when they should talk, Christian starts ghosting Logan instead of talking. Their relationship with their adoptive families is not great, either. Logan’s mother tries to control him by threatening to stop paying his tuition. He does step up for himself eventually but there is still so much unexpressed.

What I adored in the book though, was the relationship with roommates. Daiki and Noah. Noah is this shy guy who actually comes from the city the college is in. Daiki seems shy at first, but when he gets to know the others more, he is almost like a different person. He is the one who tells Logan that being bi does not mean he is a cheater.

And Noah is the one who kind of saves Logan and Christian by asking them to be his roommates when he moves away from his parents and in his own apartment. This means the guys have a home during the summer instead of going to their adoptive families.

As an aside, I loved how the “revelation” that Noah is trans was dealt with. When he comes out to Christian, he is stunned a bit, which I think comes from the sheltered upbringing, but it’s not a big deal after that, and Christian doesn’t start treating him differently, instead offering advice on how to shave better as his father taught him a special technique.