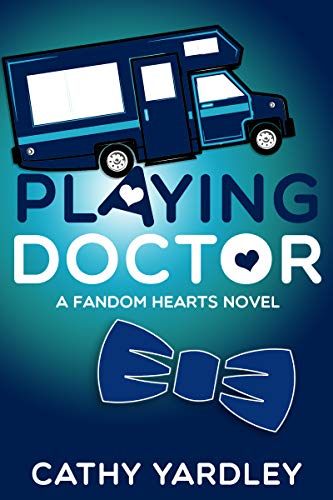 Noah, for his part, is stuck in an untenable situation. Working with Cressida, he’s discovered that the pair has enough clues that they might be only a day away from finding the four-million-dollar treasure. This extremely hot, total cinnamon roll of a boy is the son of immigrants, and is being blackmailed into delivering the treasure to a privileged douchebag, on threat of his mother getting deported. This drives most of the conflict, and it feels very real and painful. Noah’s not an asshole, and I think that he wouldn’t betray Cressida even if he wasn’t falling in love with her. At the same time, he can’t, through inaction, allow his mother to be deported and lost the life she’s known for decades.

Overall, I loved the interaction of Noah and Cressida. The title of the book comes from Cressida’s love of Doctor Who, along with Noah’s day-job as an EMT. As an EMT, Noah is well-equipped to understand Cressida’s agoraphobia, and though I imagine it would be easy to become emotionally burned out in that line of work, he’s also emotionally capable of spending time with Cressida and helping her through.

There’s no real grovel to speak of at the end, but I did very much like the way that everything was wrapped up. Instead of a big misunderstanding and grovel, the story instead develops a really strong sense of who the characters are, and it’s both cleverness and deep emotional insight into the antagonist that allow them to overcome the odds.