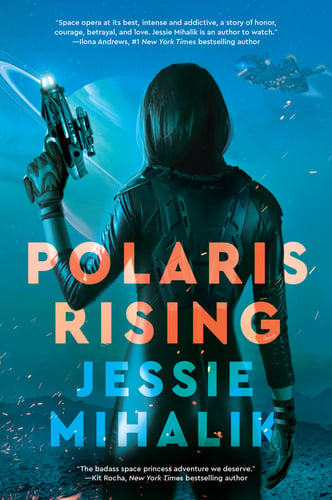 A space princess on the run and a notorious outlaw soldier become unlikely allies in this imaginative, sexy space opera adventure—the first in an exciting science fiction trilogy.

In the far distant future, the universe is officially ruled by the Royal Consortium, but the High Councillors, the heads of the three High Houses, wield the true power. As the fifth of six children, Ada von Hasenberg has no authority; her only value to her High House is as a pawn in a political marriage. When her father arranges for her to wed a noble from House Rockhurst, a man she neither wants nor loves, Ada seizes control of her own destiny. The spirited princess flees before the betrothal ceremony and disappears among the stars.Ada eluded her father’s forces for two years, but now her luck has run out. To ensure she cannot escape again, the fiery princess is thrown into a prison cell with Marcus Loch. Known as the Devil of Fornax Zero, Loch is rumored to have killed his entire chain of command during the Fornax Rebellion, and the Consortium wants his head.When the ship returning them to Earth is attacked by a battle cruiser from rival House Rockhurst, Ada realizes that if her jilted fiancé captures her, she’ll become a political prisoner and a liability to her House. Her only hope is to strike a deal with the dangerous fugitive: a fortune if he helps her escape.But when you make a deal with an irresistibly attractive Devil, you may lose more than you bargained for . . .

Polaris Rising is the first book in a new SFR series by Jessie Mihalik, and this SFR adventure is full of action, fascinating secondary characters, and interesting world-building. There's lots of sexual tension, mutual mistrust, wall-banging sex and lots and lots of med-bay visits for the space faring duo.

Ada is the fifth child of a intergalactically powerful mercantile house, groomed to spy on her future spouse once a strategic marriage to a rival house is arranged. Unwilling to let her parents choose a spouse she loathes for her, she runs away from home and out into the galaxy. After two years on the run, her father has lost patience and, eager to bring her home, has put a bounty on her head. When she is snatched from the backwater space station she had been waitressing at, she is thrown into the same cell with one of the Consortium's most wanted criminals, Marcus Loch, and their uneasy alliance is formed.

My enjoyment of this book really hinges on how much I enjoyed Ada as the main character. Mihalik built a complicated, prickly and determined lead that made sense, even when she was full of conflicting feelings, for Loch, for her family and for her house. I loved that Ada's serious badass credentials as a pilot and spy were not something that she acquired despite her privileged upbringing, but were in fact a result of her family’s cutthroat devotion to outmaneuvering their consortium rivals by any means necessary. While at times single-minded and reserved, Ada is constantly getting attached to people and building relationships that are not about turning people into tools, despite a life-time of conditioning. From the cabin boy, to Veronica & Rhys and including Loch, she cares about their welfare, not just how they can help her. I loved that although she is estranged from her father, she is deeply loyal to her family and is playing a complicated game, trying to find a way she can carve out happiness for herself without destroying her family’s fortunes.

In contrast, Loch’s motivations, history and feelings - beyond his pants feelings - are more obscure as the book only offers Ada’s POV. I didn’t love that too often when Ada can’t quite figure out what Marcus is about, secondary characters ended up trying and failing to convince Ada that Loch is dangerously attached to her, and in it for far more than big payday. There was an unbalance in the book in that we don’t get to experience how Loch’s feelings for Ada evolve while we see that, while most definitely attracted to him from the start, Ada respects his power and destructive potential... and she also fears him double-crossing her long after Loch is all-out in his protectiveness of her.

I was very wary of that protectiveness and I didn’t love their mutual jealousies whenever they encounter someone the other had prior intimacies with, but it did serve to underscore the newness and insecurity of their relationship. I also appreciated that, despite Loch’s protectiveness and blatant possessiveness, Ada’s agency is never curtailed. She has her plans, and she carries them out whether or not Loch approves. In the end, they save each other through the combination of their connections, determination, and skills.

I am eager to read the next book in this series as there are several threads in the book that are left unresolved and the couple at the center of the next book have fabulous chemistry and lots of unexplored history. I really want to see where Mihalik is taking the story. This wasn’t a perfect book, but a promising start to what is sure to be a series full of action, tension and space-faring adventure.