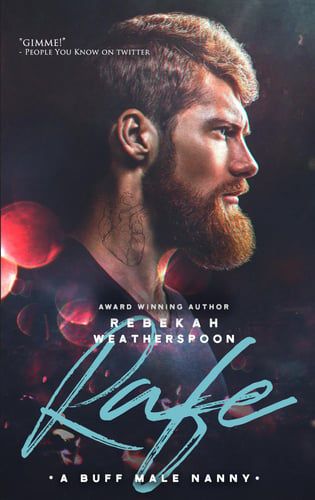 SIGNED from The Ripped Bodice

All Dr. Sloan Copeland needed was someone to watch her kids. What she found was the man of her dreams…
After a nasty divorce and a thousand mile move, Dr. Sloan Copeland and her twin daughters are finally getting the hang of their new life in Los Angeles. When their live-in nanny bails with no warning, Sloan is left scrambling to find a competent caretaker to wrangle her smart, sensitive girls. Nothing less will do.
Enter Rafe Whitcomb. He's all of those things, not to mention good-natured and one heck of a whiz in the kitchen. He's also tall, and handsome, and bearded, and ripped, and tatted, wrist to neck.
It doesn't take long for the Copelands to invite Rafe into their home. Just as quickly, both Sloan and Rafe find themselves succumbing to a heady mutual attraction, neither of them wants to deny. With every minute they spend under the same roof, this working mom can't help but wonder if Rafe can handle all her needs...
**This stand-alone romance is fluffy. So fluffy. It’s fluff. Low. Angst. Fluff. featuring a large tatted, motorcycle riding ginger man, who bakes a mean bacon quiche and knows exactly how to wrangle clever six year olds while making their mom feel loved, loved, loved.**

You know how the last couple of weeks (years, let's be real) have been AWFUL? Well, I have found the cure. It's $4.99 and it's available wherever you buy your eBooks.

What is this magic cure? It's called Rafe, the latest novel from Rebekah Weatherspoon. I cannot overstate the sheer joy this book brought me. It's fluffy and dirty at the same time, and the main characters are both adults the whole time. No silly misunderstandings that last for more than a few pages, and even then it's more like "I was trying to be professional!"

But let's back up a minute. You probably want to know the plot. *guilty face*

Sloan is a Black divorced mother of twins and a brilliant heart surgeon. As in, went to college like 6 years early brilliant. Her ex is also a surgeon, but he's the controlling, narcissistic sort of jerk that you really want out of the picture. Sloan moved far enough away from him that the kids have one weekend a month with him and he flies up to get them. (The ways he treats Sloan (and the kids) make Rafe even more perfect in comparison.) She meets Rafe when her nanny leaves one day without any notice and leaves the girls alone for several hours. (*RAGE*)

Rafe is a giant White dude who grew up in a blended family. He's great with his younger sisters and has a crew of Brown friends from the neighborhood. When Sloan is considering hiring him, she makes a point of confirming that he's not going to be a racist and you know what? GOOD. I'm tired of books that act as though parents don't want to make sure their kids' childcare providers are instilling the values they want in the children. And who wants to leave two little Black girls with a giant racist White man? In any case, Rafe got into trouble as a teen and is now on the other side of it but understands how the prison pipeline works and how systemic racism impacts communities of color.

Rafe is such a caretaker. Not just because he's the nanny and it's his job, but because he genuinely cares about people. He messes up Avery's hair at one point and there's a scene where he's looking up YouTube videos so he can fix her part. Then later he's keeping the kids out of the pool so he can protect their new styles for their first week of school. He gets recipes from his step-mom so he can cook a bacon quiche for the family. When Sloan comes home late from a stressful surgery, he's there with an orgasm and a meal.

Is Rafe realistic? WHO THE HELL CARES?! Right now, reading M/F romance, particularly if the hero is White, is a real hard sell for me and I think we all need a dude like Rafe to convince us that love is possible or, at least, distract us from the terrible men in power.

The least fluffy part of this book is the drama with the ex. The rest of it? It's like a giant cupcake, if cupcakes were sexy and didn't leave you feeling sick afterward.

I've struggled with a couple of Weatherspoon's other books for pacing (the FIT series) but this one is just a big hug and I cannot recommend it enough.