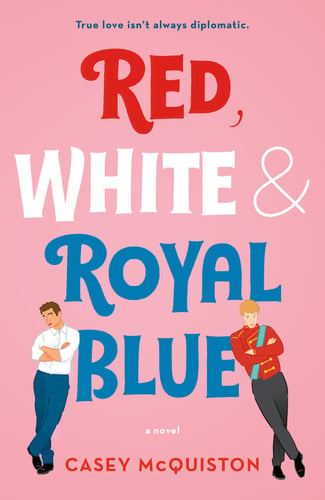 Reading Red, White and Royal Blue (RWARB) was a roller-coaster of first love, risky choices, and history in the making. Reading it as a bisexual person was validating. Reading it as a person living in a country characterized by both a spirit of hope and a history (and present) of horrors was something, too.

Casey McQuiston's writing voice feels exactly like her Twitter feed. It's irreverent and queer and funny and occasionally full of political yelling. It immediately resonated with me and I cannot wait for more.  However, the book is narrated in third person present tense, which has been a sticking point for a lot of readers. I read it on audio (even though I pre-ordered it in print) and the tense didn't bother me at all. Your mileage may vary, but the only tense I can't stand is second person.

As for the plot, you can tell most of it from the blurb. Alex's divorced parents are both in politics, his dad is a Mexican-American senator and his white mom is the first female President of the United States. They hail from Texas, and it's all woven together in a very natural way. The cast is diverse and fully developed, from HRH Henry's stodgy older brother to Alex's nerdy and camera-shy sister. The supporting cast, from their protection teams to political staffers to Henry's best friend and fellow philanthropist, are more than caricatures. It's a really lovely book to spend some time in.

All that said, Henry and Alex are young and they make some questionable choices. Like using email to write their adorable, hilarious, totally nerdy love letters to each other. Emails get hacked and leaked and they know they shouldn't be doing it while they're doing it. Love, man. Makes ya do stupid things. There's a general sense of foreboding hanging over the third quarter of the book. Something bad is going to happen and will these two marshmallows make it? (They will, of course.) I'm including some content warnings down at the bottom, so please take a look if you have concerns.

One thing I really appreciated is that while the sex scenes are certainly not fade-to-black or closed door, they are vague enough to give me the feeling that this book is not an m/m romance to titillate cishet women. Sex is an important part of their relationship and the passion and love that grows in these scenes is important. I've read some m/m by cishet women before that feels... voyeuristic. This is not that. BTW McQuiston is non-binary and uses she/her pronouns.

The ending is hopeful and lovely and made me cry in the best way. Bad things happen, but good wins. And wow, do we need a win right now.

McQuiston has packed this book with historical references, with the two young men trading bits of letters and poetry from queer historical figures. It's a very History is Gay feel.

She's also filled the book with messages about how politics should serve the people rather than how it often does. To that end, we are sharing a fundraiser for RAICES that McQuiston linked to on her Twitter feed. You can find the t-shirt that June (Henry's sister) wears near the end of the book and proceeds go to support RAICES' very important work at the border.

Content Warnings: forced outing, mention of long ago unwanted sexual advances by a politician towards a staffer, mention of past drug abuse, grief, deceased parent, mentions of racism, slavery, genocide, Henry's grandmother (the Queen) wants him to be closeted forever

We should also mention that Margrethe didn't care for this book because the MCs act young and make reckless decisions, plus forced outing.