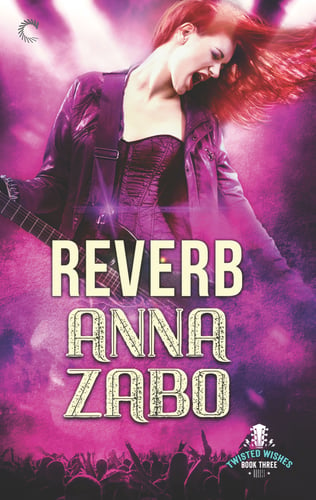 The tougher they are, the harder they fall.

Twisted Wishes bass player Mish Sullivan is a rock goddess—gorgeous, sexy and comfortable in the spotlight. With fame comes unwanted attention, though: a stalker is desperate to get close. Mish can fend for herself, just as she always has. But after an attack lands her in the hospital, the band reacts, sticking her with a bodyguard she doesn’t need or want.

David Altet has an instant connection with Mish. A certified badass, this ex-army martial arts expert can take down a man twice his size. But nothing—not living as a trans man, not his intensive military training—prepared him for the challenge of Mish. Sex with her is a distraction neither of them can afford, yet the hot, kink-filled nights keep coming.

When Mish’s stalker ups his game, David must make a choice—lover or bodyguard. He’d rather have Mish alive than in his bed. But Mish wants David, and no one, especially not a stalker, will force her to give him up.

This book has a central bodyguard trope, but what is also important is that it has Mish. In the first two books in the series, we’ve gotten to know the rest of the characters quite well, but I was always intrigued by Mish and we just saw her from the perspective of her little chosen family. She's been strong badass rocker who takes no shit. In this book though, we see things from her POV and see how much there is behind the face she wears in public.

As Mx Zabo said in our interview, Mish’s book was bound to handle sexism and the difference in how media treats men or women. Mish knows it and recognises it. No matter what she does, media always finds something to criticise her, and one extreme example is the complaint about her wearing too much make-up, even though she tends to wear less make-up than her band-mate Domino.

When she gains an obsessive stalker, David comes into picture to protect her and the rest of the band. Unsurprisingly, the tight-knit Twisted Wishes family accepts him quickly and the rest of the members even encourage Mish to pursue a relationship with David if she wants.

And here’s another thing that the author constantly amazes me with: extremely explicit consent which is … very hot, as were the rest of the scorching hot sex scenes.

There were also some remarks that were just too true. For example, not just how patriarchy sucks in general, but like when David mentions that the stalker must be a straight white guy, judging by the emails he writes and his actions in general.

While Reverb does contain difficult subjects like stalking and mentions of attempted assaults, the book is also very positive and funny. The book made me chuckle a few times, especially David and his bag of dicks, or David psyching himself up by thinking he has “balls to go with his dick. Couple of sets of them, actually.”

I also had those warm fuzzy feelings when the band took care of one another. It's meaningful seeing how much they care about each other, but are also prepared to kick ass if needed. Through their interactions, especially on tour, we get to know all of them better, not just Mish.

And we cannot leave out the fact that David, the strong bodyguard, carries a teddy bear, Marly, with him.

I knew this book would be awesome – Anna Zabo has not disappointed me yet - but when I read the dedication, I was already almost in tears. I know it might not seem that much at first glance but it means so much.

I had big expectations for this book and I have to say that it ended up even better than I hoped it would. It has everything, from suspense, rock, Adrian’s coffee, love, hot, hot sex, to chosen family and, of course, the HEA.

Alex received a copy of this book from the publisher for review via NetGalley.