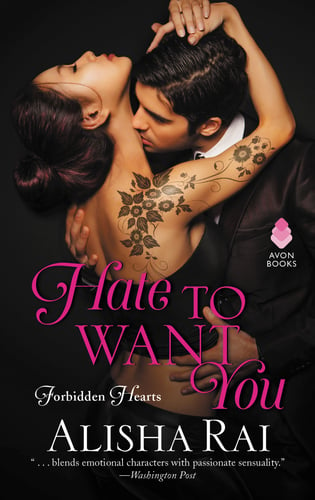 One night. No one will know.

That was the deal. Every year, Livvy Kane and Nicholas Chandler would share one perfect night of illicit pleasure. The forbidden hours let them forget the tragedy that haunted their pasts—and the last names that made them enemies.

Until the night she didn’t show up.

Now Nicholas has an empire to run. He doesn’t have time for distractions and Livvy’s sudden reappearance in town is a major distraction. She’s the one woman he shouldn’t want . . . so why can’t he forget how right she feels in his bed?

Livvy didn’t come home for Nicholas, but fate seems determined to remind her of his presence—and their past. Although the passion between them might have once run hot and deep, not even love can overcome the scandal that divided their families.

Being together might be against all the rules . . . but being apart is impossible.

Rewind: Hate to Want You, by Alisha Rai

This review originally appeared at Heroes & Heartbreakers in July 2017. Since that content is no longer available, we're giving it a new home!

Hate to Want You is full of classic romantic elements, but features smart, real characters who feel 100% modern. With this book, Alisha Rai has given us a Romeo who is kind, sexy, great at his job, but making some poor choices in his personal life. Her Juliet is independent, caring, self-aware enough to deal with her depression, but avoiding her family and her feelings for Romeo. Rai’s writing combines the best of old and new, creating a story you won’t be able to put down.

But first. Look at that cover. Do you need some time alone? I’ll give you a minute.

Okay, now let’s talk about the book. Alisha Rai starts her Forbidden Hearts series with my favorite book of hers yet. If you’ve read A Gentlman in the Streets or Serving Pleasure,you know that’s saying something. In her trademark style, she ramps up the sexual tension and heart-wrenching yearning to give romance readers the Romeo & Juliet they’ve always wanted. The story is slowed at times by exposition, but Rai weaves history and relational details into deeply emotional scenes that will leave readers wondering how things could have gone so wrong. Long-held secrets, complicated family dynamics, and blazing hot chemistry make this a page-turner.

Livvy and Nicholas are the grandchildren of two men who founded a grocery store chain together after WWII. They grew up together, fell in love, and should have been set for life. Then Livvy’s father crashed his car while driving Nicholas’s mother and killed them both. Before anyone had a chance to process this tragedy, Nicholas’s father bought out Livvy’s family’s share of the company for less than its worth, a move that destroyed the bond between the two families and tore Nicholas and Livvy apart.

Livvy spends a decade traveling around the country, building a career as a tattoo artist and avoiding her past. Nicholas spends those years brokering peace between his grandfather and his father, now co-owners of the grocery store chain. Everyone is miserable. One night a year, they meet for a few hours of release. As you might expect, it doesn’t work. When Livvy returns to town to reconnect with her family, Nicholas is forced to unbottle his emotions and work to be the person Livvy needs and deserves.

Alisha Rai has packed this book with unfiltered yearning. A constant undercurrent of wanting is brought to the surface in a series of emotionally charged encounters – sexual and not. The hero and heroine have so much history that it’s not just a matter of “getting over themselves” to be together. They have a lifetime of love, memories, and hurt to resolve.

Their story is tangled with the feud between the Oka-Kane and Chandler families. Their story is wrapped up in Nicholas’s struggle with his emotionally abusive, manipulative father. Their story is tarnished by Livvy’s brother’s alleged arson of the original grocery store. Their story is beautiful and heartbreaking and grown-up and all things that contemporary romance can and should be.