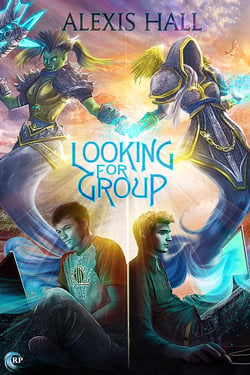 Looking for Group, by Alexis Hall, is a geek’s dream. (Or at least this geek’s dream.) The story centers around two college (university, since they’re Brits) students who meet and fall in love while playing an MMO. For the uninitiated, MMO stands for Massively Multiplayer Online game. The game in question is called Heroes of Legend, a fictionalized version of World of Warcraft. The story takes place in two phases, first when Drew joins Kit’s guild (that’s a closed community of players) and they become involved, and later when Drew and Kit try to reconcile their real and virtual lives.

Drew has been in a very goal-oriented raiding guild for a long time and quits because he’s fed up with loot system. (Distribution of treasure/equipment). When he joins Kit’s more casual guild, he’s welcomed into a group of people who are… friendly. He’s not used to a social guild, so readers get some excellent dialogue as he opens up, starts making jokes, and bonds with a particularly well-dressed lady elf. After a good bit of one-on-one online hanging out and significant feels, Drew discovers that Solace (Kit) is actually male in real life and has a bit of a freak-out. With some help from Drew’s real-world friends (and time), Drew figures out that maybe he likes Kit regardless of his gender identity. It’s not as big a deal as he thought. Maybe he’s even gay. That’s not made into an issue, though. Labels need not apply.

To (Solace): so I’ve been thinking

(Solace) whispers: Sorry, I keep typing things and deleting them

(Solace) whispers: I’m not ignoring you]

To (Solace): look I’m not promising anything

To (Solace): but I’ve really missed hanging out with you

To (Solace): so do you want to maybe try that again

Second phase is more complicated and this is where the story is universally relatable. If you’ve ever developed a relationship online, whether professional or social, you’ve probably struggled with boundaries and reality a bit. If you have a purely email-based relationship with someone, can they truly be there for you if you have a problem? Can you be there for them? Are you truly friends if you’ve never met in person? Kit and Drew relate to their online gaming experience in completely different ways: Drew logs on for raids and then goes back to reality while Kit logs on to hang out with his friends, whom he sometimes visits in real life. It’s a difference of philosophy and causes Drew to examine his judgments, his friendships, and the value of a virtual community. Drew figures out that he probably left his old guild not because of loot distribution, but because the people in that group didn’t know or care about each other and that just wasn’t a fun environment to spend a lot of time in.

The cast of secondary characters is well-developed, with characters who really feel like people you might know. The dialogue is smart but also realistic. It sounds real when read aloud.

“Drew, I’m a skinny Asian dude who’s had one girlfriend in his entire life. I have all of two friends. You play actual sports. You can talk to girls and, as it turns out, boys. Being a nerd is basically optional for you. So why the hell would you be bothered by anything I say about anything?”

“Because you’re my best mate, you colossal douche. Of course I care what you think about stuff.”

Before you go buy it (which you totally should), you should know two things. First, the story is pretty heavy on the gaming. Not just references, but chat logs and actual fights. They reveal a lot about the characters, but if you don’t like gaming or at least fantasy environments, this might not interest you. Second, the sex is closed door. If you’re picking this up for male/male erotica, look somewhere else. If you are looking for a romantic, sweet story that will make your heart hurt, this is a great pick.

A note on bias: I met my husband playing World of Warcraft. I thought he was a sexy lady archaeologist and wanted so badly to get with her. Turns out he was/is a sexy man archaeologist and I still wanted to get with him. Eleven years later (yes, I’m getting old) we are married, have two kids, and still game together. Love can be found just about anywhere. :)