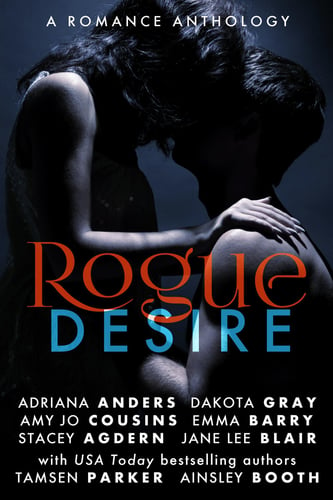 Since then, ROGUE AFFAIR and ROGUE ACTS have been released, and pre-order info for ROGUE HEARTS just went out!

You can pick up ROGUE HEARTS for just $0.99 for a limited time: Amazon, iBooks

Adriana Anders, who wrote the wonderful novella below, Grassroots, has rewritten, extended, and renamed that story and is releasing the new version on April 19th.

(A few other authors are starting to re-release their stories as standalones, in case you don't want to read all 8 stories.)

Eight romance authors have teamed up for Rogue Desire, an anthology of what they’re calling “Resistance Romance.” The result is eight stories that serve up doses of heat and hope during a tumultuous political time. It’s like this: the daily (hourly?) news cycle is exhausting, but like a car crash in slow motion, many of us can’t look away. If you can’t look away but also like to read romance… this is the anthology for you.

While a couple of the stories didn’t work for me personally, I was completely engrossed in others. As is the magic of anthologies, every reader has a different favorite, and I really hope some of you will seek me out on Twitter to talk about yours. In the meantime, here’s a snapshot of each story:

In the first story, the heroine is running for city council and meets the hero, a visually-impaired hacker/inventor while she’s canvassing. The hero is super hot, but hasn’t had a real relationship because he hasn’t found someone who gets him. The heroine doesn’t have a “name” and just wants to do right by her community. He uses his network to help her out, and she helps him come out of seclusion. This story is known to have made at least two H&H bloggers cry.

Next up are a male prostitute coerced into gathering information for the FBI and a housekeeper at a posh hotel, gathering info for a less-than-legal entity. They’ve known each other from the hotel for months prior (my catnip, yep), but everything changes one day when the heroine not-so-subtly picks up a cell phone belonging to the hero’s customer/target. The story contains Gray’s trademark holyhotpants level of heat, and gets an A+ for discussions of consent, protection, and testing (all handled without maligning sexworkers!). I wonder though, how long has Gray been waiting to use that title?

Cousins’s story focuses on a forbidden relationship between a grad student TA and one of his students while they’re on a trip down to DC to protest for immigrant rights. The student gets into some trouble as part of an antifa group and the grad student ends up accidentally being his getaway driver. The two men engage in some sexy alley and bus times, intermixed with lots of discussion about protest and privilege. If you like it, Cousins is going to make this a full book, as part of her Off Campus series!

Kissing and Other Forms of Sedition by Emma Barry

Emma Barry’s tale is chock full of nerds, as you’d expect. The hero and heroine work together, and she asked him out once. He turned her down because he doesn’t think he’s good enough for her and doesn’t want to hold her back professionally. One night, after a series of tweets convince him that the world may literally end soon, he shows up on her doorstep. Sexy times conclude with lengthy discussion of one particular constitutional amendment and the ways in which invoking or not invoking it could impact the immediate and distant future (I told you they’re nerds). If you like Barry’s previous political romances, this will hit all of the buttons.

In Agdern’s entry, the heroine is the president’s not-famous daughter, trying to hide from his politics and the rest of her family. She also happens to have started a preschool that is being negatively affected by her father’s policies. The hero is a lobbyist, but they meet at a sushi place, so she doesn’t know that at first. Eventually, the plot pivots on discovery of a secret notebook with possibly life-changing information about the heroine’s sister, father, and others. And, because it’s Stacy Agdern’s book, the hero and heroine root for different hockey teams.

My Delight is in Her by Jane Lee Blair

Blair’s story is a second-chance romance between a pastor and a woman who chose not to be part of his life when he chose ministry. The book turned out to be reflection on the role faith can play in a person’s engagement with social issues. With characters who are Christian, swear, and like sex, Blair weaves her story with threads of forgiveness, hope, and persistence.

The hero in this one was on track to be a tech billionaire, then gave it all up to become a park ranger. The heroine is a journalist and shows up on his doorstep asking questions about a certain Twitter account. He has a beard.

The heroine and hero in the last story are on opposite sides of the political divide. They see each other at the gym a few times a week, and he wears certain political shirts to the gym that infuriate her. Unfortunately, he’s hot and turns out to be incredibly intelligent. If you imagine the sort of arguing that two intelligent people would do if they disagreed on fundamental political issues, that’s what Parker gives you. As is fitting for the last piece of an anthology, it ends on a hopeful note. And no, I did not cry a second time. (Yes, yes I did.)

In all, this is a really solid anthology, bookended by two very strong, emotionally resonant stories. I was pleasantly surprised by the amount of representation for communities of faith and color, and the mix of activities at a local and federal level. And, as is always the case with anthologies, it’s a great way to try out some new-to-you authors!