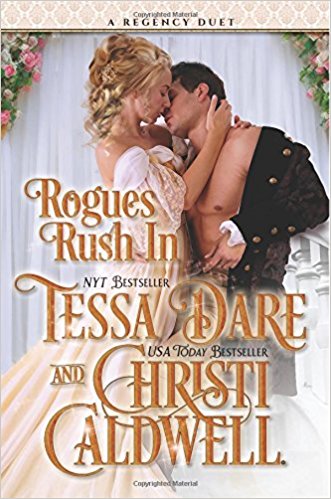 His Bride for the Taking by NYT Bestseller Tessa Dare
It's the first rule of friendship among gentlemen: Don't even think about touching your best friend's sister. But Sebastian, Lord Byrne, has never been one for rules. He's  thought about touching Mary Clayton—a lot—and struggled to resist temptation.  But when Mary's bridegroom leaves her waiting at the altar, only Sebastian can save her from ruin. By marrying her himself. In eleven years, he's never laid a finger on his best friend's sister. Now he's going to take her with both hands. To have, to hold...and to love.

His Duchess for a Day by USA Today Bestseller Christi Caldwell
It was never meant to be…
That's what Elizabeth Terry has told herself while trying to forget the man she married--her once best friend. Passing herself off as a widow, Elizabeth has since built a life for herself as an instructor at a finishing school, far away from that greatest of mistakes. But the past has a way of finding you, and now that her husband has found her, Elizabeth must face the man she's tried to forget.It was time to right a wrong…
Crispin Ferguson, the Duke of Huntington, has spent the past years living with regret. The young woman he married left without a by-your-leave, and his hasty elopement had devastating repercussions. Despite everything, Crispin never stopped thinking about Elizabeth. Now that he's found her, he has one request—be his duchess, publicly, just for a day. Can spending one day as husband and wife rekindle the bond they once shared? Or will a shocking discovery tear them apart...this time, forever?

ROGUES RUSH IN is a duet of stories by Dare and Caldwell, each focusing on roguish men and their scandalous paramours. In HIS BRIDE FOR THE TAKING, Lord Sebastian Byrne has pined for Mary Caldwell, the sister of his best friend, for years. But when Mary’s brother died in battle, he made a promise to honor and protect her for the rest of his life. None of this included marriage. This code of honor has kept him from pursuing Mary for years. When Mary’s fiance leaves her at the altar though, all bets are off. Sebastian sees this as an opportunity to not only fulfill his friend’s wishes for his sister by saving her from embarrassment but also finally wedding the woman of his dreams. Dare’s story is super cute, with a lot of witty banter and some small twists that make for a sweet love pairing. BUT WE HAVE TO TALK ABOUT THE IKEA SCENE.

Sebastian takes Mary to the Byrne's seaside cottage (as you do when you are a lord) and they decide to clean it up and make a proper master bedroom for themselves. There’s a Swedish bed frame in the attic that has some pictorial instructions and lots of extra pieces. It’s here that Mary and Sebastian get into their first lovers spat - putting together Swedish furniture. Now outside of Regency Ikea situations, we’ve all been here. Putting together this cheap yet functional furniture is a gauntlet for any relationship. I once yelled at a piece of Ikea furniture for hours while my husband timidly stepped around me, knowing all too well I was in my rage zone and needed to be left alone. The fact that Dare could spin this into a Regency-era romance slays me. It made a typical historical romance story that much more special. If Sebastian and Mary can survive this, they can survive anything.

Where Dare’s story captured the funny side of historicals that I like, Caldwell’s story HIS DUCHESS FOR A DAY touched on the drama that is present in every BBC period piece. Crispin finally finds his long-lost friend Elizabeth, who is teaching at a finishing school. This once headstrong woman is now teaching young ladies how to be subservient to their future husbands. Why? Because she’s running from the truth - she and Crispin married when they were teenagers, and Elizabeth fled when she found out that he didn’t feel the same way about her as she did for him. Years later and she hasn’t forgotten her first love, who happens to be all over the local papers because of his rakish antics. Elizabeth agrees to play the part of the wife for Crispin for one day, but of course, it’s not just for one day. This is a romance story!

The miscommunication trope is played a lot in historicals, but Caldwell’s story does it very well. Elizabeth has every reason to mistrust Crispin. He’s a duke, and she’s just the childhood neighbor. They are in no way on the same status level. When she overhears him telling his family that marrying her was a mistake, we believe it along with Elizabeth. I like though that this miscommunication does not stop them from having some intense physical chemistry. They may vex each other, but they will make out on a boulder while walking their lame horse into town. And better still, Elizabeth and Crispin work through their past drama and become stronger for it.

The scandal in both of these novellas is pretty low-stakes, though I will fully admit that I don’t read as many historicals as other romance readers. Perhaps marrying a woman left at the altar or reconnecting with an estranged wife is scandalous in the Regency era? I’m sure it was. Everything seemed pretty scandalous back then. Though the title suggests that both of these men are rogues, they’re more like gentlemen in rogue’s clothing. Crispin may frequent dens of pleasure and vice with his friends, but it doesn’t seem like he really partakes in anything. And Sebastian has some family drama that gives him the rogue moniker but otherwise is an upstanding guy. The scandal part of it really falls on the women - Mary is left at the altar and on the path to spinsterhood and Elizabeth ran away from her husband. I could on and on about the gender politics of this but I will spare you.

Both stories are great short reads for your summer vacation and are game to entertain. Elizabeth and Mary are great protagonists and not the subservient women Elizabeth tries to create in her finishing school. Even if historicals are not your thing, I recommend giving ROGUES RUSH IN a shot. Though the setting is historical, the themes are not.