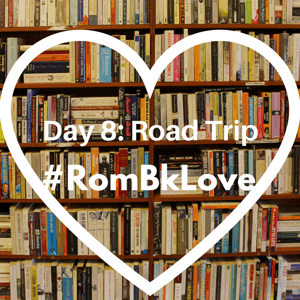 Hello and welcome to Day 8 of #RomBkLove! Today we're talking about road trips in romance, which are super fun!

What are your favorite road trip romances?

What do you love most about this genre convention?

You get to sit in the backseat on one of these road trips - which one is it going to be and why?

To me, road trips are often where I can find my favorite tropes smooshed together. Take two (or more) enemies, add some forced proximity, and you get two (or more) lovers.

In this post, I'll be talking about road trips in the broadest sense: a journey taken by two or more characters toward a specific destination. This means that yes, running away from the Big Bad is a road trip, even if it's that very American summer pastime of packing some snacks and hitting the road in a car. I guess a lot of Sci-Fi would count, but I'll leave that up to you to decide. Space journeys = road trips? Hmm. Today I'm sticking to trips that take place on an actual road.

Do they fall in love while on the trip, arriving at their destination completely infatuated? Or are they already in love and the carriage/car/train puts them in a forced proximity situation that forces them to confront their feelings? It's like being snowed in, but without staying in one place.

I can't wait to read about everyone's favorite road trip romances, but in the meantime, here's my list to get us started!

Let's Take a Ride in a... Carriage

Historicals are full of road trips. There are even a couple of authors I can think of who put a road trip in each of their series. The limitations of travel and lack of modern conveniences really up the stakes in historical romance. Can we afford two rooms? Does our disguise require that we share a room? Is this the only way to keep everyone safe? Is everyone wet and needs to strip down to dry their clothes by the fire? How often do we need to stop for food? Are the horses doing alright? 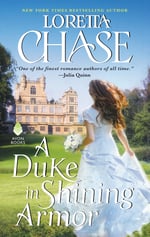 In Loretta Chase's A DUKE IN SHINING ARMOR, the heroine is a runaway bride, the hero is the abandoned groom's good friend. He sees it as his duty to take the bedraggled, rather drunk young woman to safety, and they end up having quite the adventure. Chase sprinkles the narrative with scenes from the groom's perspective as well, which are humorous and serve to prove that the two really oughtn't marry. The plot doesn't end when they reach their destination, but it's that forced time together (that they never would have had otherwise) that leads to their HEA.

Sarah Maclean starts off THE ROGUE NOT TAKEN in a similar manner, with the hero and heroine running off together. Of course there's ruin and the looming spectre of his awful father hanging over them, but they do find plenty of time to smolder and banter.

Maybe the Biggest Road Trip of All is in THE GENTLEMAN'S GUIDE TO VICE AND VIRTUE, which is essentially entirely road trip and leads to self-discovery on the part of several characters. (It's not a perfect book, with one of the male protagonists forced into the role of "black character teaches white character about privilege," but a lot of people love it.) 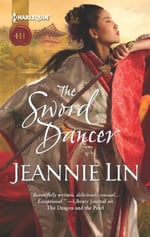 Not everyone can afford the expense or visibility of a carriage, however. Sometimes, you just have to walk.

In Jeannie Lin's THE SWORD DANCER, thief catcher Han chases sword dancer/suspected thief Li Feng all over the countryside, in a beautifully written, twisty-turny adventure. It's a classic case of "man of the law sees things in black and white until he realizes not everything fits into his neat categories." (Li Feng is smart and athletic and graceful and conniving and basically the best.)

My favorite part is when they agree to pause the chase and resume it after a break during which they work together, because of honor or somesuch thing. 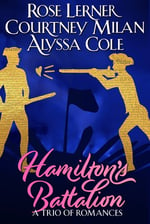 They're both fully aware of the roles they play and why they play them, which makes it all the sweeter when they finally get their HEA.

Courtney Milan gives her two protagonists plenty of time to talk and eat cheese in the HAMILTON'S BATTALION novella, The Pursuit Of... The two of them meet on the battlefield and end up walking from Virginia to Rhode Island together. That's a long time to get to know someone, and Milan's heroes manage to cover all manner of topics, from slavery to wealth to privilege to the meaning of freedom. Oh, and the two of them fall in love.

One more note on road trips in historical romance:

Though I'm not sure anyone would call them a "road trip romance," many of Beverly Jenkins' novels have a travel element, whether it's pirates, the Underground Railroad, or a mail order bride traveling to meet her new husband. There's a long walk in Alyssa Cole's A HOPE DIVIDED, as well. It's quite possibly the most terrifying part of the entire book, and so compelling that you'll not be able to stop reading until you see the characters safely on the other side. 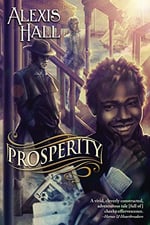 Post-Apocalyptic Fiction - Is There Still a Road? 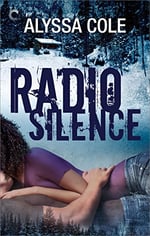 Like historical, the post-apocalyptic subgenre of romance is just begging for road trip plots. The Big Event hits and everyone has to get to safety, leave to find food, go find their missing family, etc. After all, Cormac McCarthy's massive bestseller THE ROAD is post-apocalyptic and is literally named for the road the characters are walking on during the entirely of the novel.

Alyssa Cole's RADIO SILENCE starts off with the heroine and her BFF traveling to his family's house. The two of them don't end up together (she gets together with his brother) but the "road trip" sets the stage for the entire trilogy, giving the readers a look at the state of the country now that everything's falling apart. 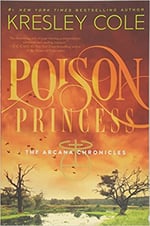 Kresley Cole's Arcana Series is technically YA, but there are cannibals, zombies, and characters imbued with Tarot-inspired powers, plus a love triangle and some sexy-times. The characters almost never stop moving, either toward something or away from something, and only occasionally do they have an actual vehicle to help them. (Several of her Immortals After Dark series, which is decidedly adult paranormal romance, also have road trip aspects.) 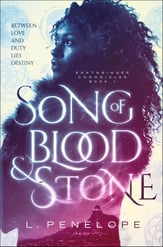 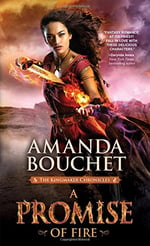 If we're going with this really loose definition of a road trip, are most epic fantasy novels road trips? Sure!

L. Penelope's re-released SONG OF BLOOD & STONE has a major travel element, as does much of Amanda Bouchet's Kingmaker Series, which starts with A PROMISE OF FIRE. 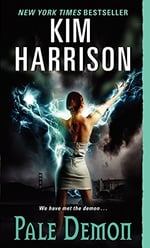 I came to Romancelandia from the reading world of urban fantasy, which is usually full of Big Bads and magical items and/or curses. Our protagonist sometimes has to team up with their nemesis to save the world, and they often have to take a trip to do it.

In Kim Harrison's PALE DEMON, book 9 of The Hollows series, the heroine and

her friends are traveling 2,000 miles across country from Cincinatti to San Francisco. Rachel's nemesis, Trent, is in the car, too, of course.

They're being chased by bad guys, so they end up stopping at seedy hotels, fighting off demons, and fighting with each other. Looking back, the trip is also a turning point in the series, a literal shift in the overall series plot. For a series that's based mostly in one city, it was really interesting to see all of the characters outside their comfort zones and forced into a car together. 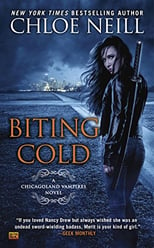 Chloe Neill does something similar with BITING COLD, book 6 in her Chicagoland Vampires series. Merit and Ethan leave Chicago to drive across the midwest in search of an artifact (of untold power, this is urban fantasy) and end up having a confrontation with *spoiler* that threatens to all but destroy Merit on a physical, magical, and emotional level. Again, it's middle of the series and is something of a turning point for the overall series arc. Are we seeing a pattern...? 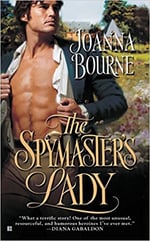 Romantic suspense also often has a road trip element, as characters are frequently on the run from or hunting down the baddies. I don't read romantic suspense, however, so please, add your faves to the #rombklove tag!

Probably the closest I'm going to get to a romantic suspense recommendation is Joanna Bourne's historical romance THE SPYMASTER'S LADY, which involves enemy spies, disguises, and a road trip from France to England. It's a complicated set-up, but a load of fun, particularly on audio.

Sci-Fi romance often has a travel element, but it's usually in space so I didn't include them here. No road, so no road trip? 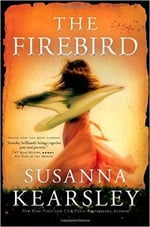 Although there's (time)travel in many of her books, Susanna Kearsley's THE FIREBIRD is one big road trip. From Scotland to France  to Russia and from the present to the 1700's, THE FIREBIRD is a road trip across land and time.

The Less Than Epic Adventures of TJ & Amal

If you haven't read this comic, you're missing out. It's essentially one big road trip with two friends who end up falling in love. It was a webcomic, but it's complete so you can read the whole thing!

And that's it for my Road Trip Romance Recommendations! I hope you'll join us on Twitter and tell me about your favorites and what you love most about road trips in romance using the #RomBkLove hashtag!

You're probably reading this for one of two reasons:

If you're in Category A, welcome to Love in Panels! We talk about romance novels and romance comics! You can read more about the team over here and see our recent posts over here.

If you're in Category B, I urge you to check out Ana Coqui's post, which explains the whole thing. It's essentially a month of discussion prompts to get us all chatting about the romance we love on Twitter! Ana is also gathering tweets from each day's discussion into "Moments." (She's lovely that way.)