Veronica Scott shares her top picks in Sci-Fi Romance for the month of December! A pregnant heroine with two men fighting for her affection, a fairy tale retelling, and a cyborg-human romance on a desolate planet. 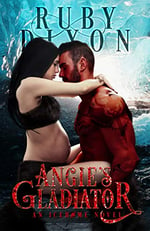 I really should know better by now than to think I can just read a few pages of a new Ruby Dixon novel in between doing other tasks. Nope! I sat down to start her latest, Angie’s Gladiator (IceHome Book 5) and next thing I knew, it was past my bedtime and I’d finished the book. Forget housework or anything else less compelling than Angie’s story. Ms. Dixon has a way of drawing the reader into the lives of the characters and not letting go. There were several unique things about this book – for one Angie, who has been kidnapped from Earth by alien slavers like other women in the series, and saved by a crash landing on the ice planet, wakes up from cryo sleep very pregnant. She has no idea when or how she got into that condition and of course has much anxiety in the early portions of the novel over what she might give birth to. (Angie is also an avid fan of the ‘Aliens’ movie franchise, which doesn’t help her worries now.)

Angie’s condition precludes any of the steamy encounters Ms. Dixon usually writes for us until quite late in the book, although there is some heavy petting at certain points and much thought about romantic encounters.

Vardis and Thrand, two cloned gladiators, freed in the same spaceship crash, are unaccountably devoted to watching over Angie. They’re also not-so-friendly-at-times rivals for her affections. Angie is drawn to Vardis and I have to say he’s quite an excellent guy in so many ways. Vardis is definitely a keeper! Angie and Vardis work their way through various cultural misunderstandings and problems of living on an ice planet, basically in a barbarian status. Spin the bottle and knock-knock jokes are just two of the situations which arise to cause difficulties for the pair. Formerly as close as actual brothers, Vardis and Thrand both have issues from being clones which Ms. Dixon developed in an interesting fashion, good worldbuilding.

And then Angie’s baby is born…

Trust the author to deliver the happily ever after ending is all I can say without doing spoilers here. I thoroughly enjoyed the book. My only very minor nit is that while I enjoy seeing characters from the earlier novels, Ms. Dixon throws a lot of them into this book and a few scenes made me dizzy, trying to remember who was who from stories way earlier in the Ice Planet Barbarians series. But the action stays focused on Angie for the most part. And she and Vardis do get their scorching moments together by the end of the book. 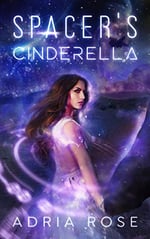 Aurora Sato, the heroine of Spacer’s Cinderella by Adria Rose, is a brilliant scientist from an impoverished and nearly abandoned frontier planet where the terraforming didn’t take and is slowly peeling off, leaving the surviving impoverished population to die. Her parents are still on the planet and Aurora is everyone’s shining hope. She eventually managed to obtain a rare scholarship to Calliope University and has been doggedly pursuing her private research as a graduate assistant to various professors. Although she has a doctorate from a provincial college, the snooty Calliope U doesn’t recognize their program as worthy, depriving her of recognition, credibility and a higher stipend. She teaches classes, writes papers, debugs other people’s research problems, runs endless analysis for her professor, grades homework, counsels students and does her own experiments on terraforming in a crushing whirl of neverending activity that left me exhausted. I loved Aurora – she’s such a genius and so knowledgeable that even people who look down on her for her rural origins have to admit her STEM brilliance.

Calliope University is a cut throat place where academic politics rule the day. You’ve heard of publish or perish? In this vision of the future it’s just about that drastic. Fail a class, lose your grant, offend your academic sponsor (or threaten the success of their career trajectory by being too smart) and you get exiled from the academic planet pretty much immediately, no appeal, no second chances. And the authorities are none too picky about where you might end up. Aurora treads a wary path through the pitfalls and perils until one day it all falls apart.

Spacer’s Cinderella has a solid scifi underpinning, with good worldbuilding and an excellent grasp of how things can be in the world of rarified universities. There’s a very satisfying romance between Aurora and Magnus Thorne, who’s like Howard Hughes in reverse maybe, as the inventor of the most important advance in technology ever, rich beyond anyone’s dreams, who presents himself to the world as a top scientist but hides his ownership of the slipstream tech.  He’s risen to an unassailable position in the university’s academic hierarchy. He’s the ‘spacer’ of the title, with dangerous deeds in his past, useful cybernetic enhancements and a tendency to rush off to perform dicey space rescues on occasion.

Wait, you may say, isn’t this a fairy tale retelling?

The author inserts a few Cinderella-esque nods – fancy shoes play a part in several scenes, there’s a ball and a fabulous dress, and Aurora works hard all right…but it’s more romantic suspense in a scifi world than a fairy tale. Aurora earns every bit of the success and happiness she has through her own talents and smarts by the time the HEA arrives.  No magic!

I’ve said before in this space that if an author can make me love a book even when using a trope I don’t resonate with – miscommunication in this case – I’m even more impressed. Magnus and Aurora try earnestly to understand each other and there are solid reasons why some messages and information don’t penetrate – he’s her superior at the University, she’s totally wrapped up in her experiment to save her home world (and a bit socially awkward and naïve) – it was all believable to me. And the sexual tension between these two was scorching from the moment they met in a nightclub, so there’s that… I read the book in one sitting and now I’m hoping for a sequel. There are definitely some supporting characters I’d like to see more of! 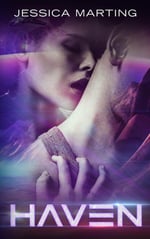 Haven by Jessica Marting is a fast read and a very enjoyable story of two lost souls finding each other on a desolate planet. Cressida toils away as a clerk in a cubicle on a dead end world. Her one indulgence is spending her savings on low budget vacation trips and taking holographs of the sights. While on such a trip, her cruise ship becomes disabled and sets down briefly for repairs on an abandoned planet, Haven. She wanders away from the ship to sightsee and is left behind.

Lukas, an escaped military cyborg, has taken refuge on Haven a number of years ago and put together a depressingly simple life there, living in the ruins and scavenging. He’s not sure if he should save Cressida from the lethal flora and fauna or kill her to avoid any risk of her revealing his presence. Of course his internal debate resolves itself as soon as her sees her (because he is a genuinely nice guy)…and building from that point the two lonely people have to adjust to each other, make allowances for each other, forge a partnership to survive the worst Haven can throw at them and fall in love in a very heart tugging romance. Made my heart go pittypat, because they have a definite physical attraction to each other right from the start and there are several mild bedroom scenes as their relationship deepens.

And then everything changes because…oops, no spoilers is my mantra. I enjoyed the resolution of the story and was left wishing there’d been more because I liked the characters so much.