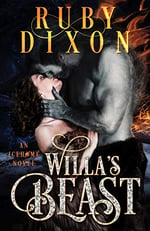 Ruby Dixon’s Ice Planet and Ice Home series are reliably steamy reads. By which I mean when I’m in the mood for a skillfully told tale of hot moments on a cold planet, plus characters with interesting problems from their past, and the challenge of surviving the best the unhospitable world can do to kill them, only one of her books will do. I also was totally captivated by Willa, the human woman heroine, virtually from the first moment she appeared. She’s one of sixteen women new to the planet, having been recently rescued from a slaver’s ship. She’s from the South, she takes no nonsense and she’s the only one who sees Gren, the hero, as a person “just scared and trying to get himself free.”

Gren is a genetically created warrior, made for only one thing, fighting in the various interstellar arenas and killing or being killed. The residents of the ice planet can’t talk to him, they’ve never seen anyone like him and all he does at first is fight literally tooth and nail to be free.  Because underneath his shaggy, furry exterior is a thinking being who has simple but poignant hopes and his own code of honor. “I fight. I always fight. It never works but someday...it might. I might break free.” He gets badly beaten and tied up and no one is sure what to do with him.

Willa has no doubts. “I’ve been the trapped one before, and I think of all the times I wanted someone to come and rescue me.” She reaches out to Gren carefully. He’s never met anyone like her before and so of course attraction blooms.

If you’ve been reading the books, you know that there’s a benign parasite the humans call a ‘cootie’, which must be implanted in each person if they hope to survive the harsh conditions. This ‘khui’ is also very determined to match everyone up with their ideal mate, a process known as resonating. Guess who Willa and Gren resonate with? Right, the beauty and the beast resonate with each other! Only in this case the resonating presents problems of an…um unusual sort, and Willa and Gren have to overcome deeply buried instincts each harbors as a result of their past experiences. Distrustful of others – besides each other - would be an understatement. On the ice planet it does take a village to survive and you really do need friends though.

Lots of plot twists and turns ahead, including Gren learning and applying the all-purpose Southern phrase “bless your heart”. It’s wonderful to see so many characters from the earlier books, including Veronica the healer (I particularly love her name of course and the fact she resonated with a golden dragon shifter alien) and others reaching out to try to help the stubborn hero and heroine, who often don’t think they need any assistance. The scene toward the end of the book where Veronica has to help in some unusual ways, to everyone’s discomfort – no spoilers – was quite a twist.

I very much enjoyed the story and all the steamy scenes along the way – Ms. Dixon is an accomplished story teller.

Mach One: Intergalactic Dating Agency (Cyborg Cowboys of Carbon County Book 1) by Elsa Jade caught my eye because of the fresh take on a cyborg – that having crash landed on Earth long ago, now he’s living as a rancher in the wilds of Montana. The book did not disappoint in the least and I read it in one sitting. There’s a lot more to cyborg Mach Halley than meets the eye – even his real name is poignant when we learn the truth of it – and his backstory had all sorts of surprises and twists. Created as a weapon of war to kill interstellar enemies, he’s found a degree of happiness living in a remote area with his dogs, his cattle and a brother cyborg.

Until the night another long dormant member of his crew suddenly decides to be born from a giant egg. Forget supersize – this egg is dinosaur size. Mach knows he needs help and as it turns out the veterinarian on call is Dr. Chien Lun-Mei. She’s newly arrived to the area, having the usual tough time proving herself to the local tough-as-nails ranchers (but saving a mare and her unborn foal at two in the morning changes a few minds – she’s got the skills) but loving life as a vet.

During the long night inside his very oddly constructed house, waiting for the mysterious egg to hatch, she learns a lot about Mach and his backstory, but even that doesn’t quite prepare her for what emerges from the egg. I can’t do spoilers but this story was a lot of fun and I loved the way the attraction between Mach and Lun-Mei develops and grows. She makes him feel “Like he was whole and real and strictly himself, regardless of the implants and nanites and deep-wired coding…” Mach goes through quite the character arc during the book. The heroine is self-confident and secure from beginning to end, takes most things in stride, and even when the couple are temporarily a bit at odds toward the end of the book, they’re still a team. I’d have been happy to read much more about these two.

There is at least one planned sequel and I have to say I’m eager to read that whenever it becomes available! 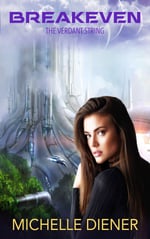 Michelle Diener does serious world building in all her scifi romance series and handles interstellar politics and the effects they have on the ‘gen-pop’ or general population of the various planets deftly. Of course the rich, or ‘Cores’, are getting richer, usually by dint of devious schemes to defraud the ordinary folks. Breakeven, her new novel in the Verdant String series, starts right off in the middle of a pitched battle that was also a set piece scene in the first book Breakaway. Now, in this second book, we’re seeing the events from the standpoint of Dee Vanuka, a kickass security person and undercover revolutionary on her own planet.

Through a series of misunderstandings, she ends up aboard the spaceship of a very rich but now dead girl, mistakenly abducted by Sebastian, a rebel leader from another planet in trouble. If you haven’t read the first book, you can dive straight into this one, but focus on the adventure going on. Don’t worry about all the names of planets and factions getting thrown at you – it gradually becomes clearer as the books proceeds. At first Sebastian is understandably angry with Dee for not being the woman he had targeted, even as he admits it’s not really fair of him to blame her. Then Dee takes some huge risks to protect him and his little band of rebels and we’re off to Lassa, his home world.

I enjoyed Dee’s various attempts to masquerade as the dead girl. I loved watching the romance build between her and Sebastian – lots of trust issues on both sides, as you might expect, and there’s a mole in Sebastian’s organization who betrays them at various times. There’s also an adorable alien pet named Fluffy, who turns out to have more to her than just big eyes and a nice purr.

Definitely a worthy addition to the series!

(Scott received a copy of this book from the author for review purposes.) 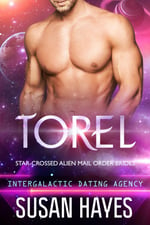 Torel: Star-Crossed Alien Mail Order Brides (Intergalactic Dating Agency) by Susan Hayes is terrific example of the “aliens need human women” trope. This series has been going on for a while so we’ve gotten past the stage of actual abduction, as the women abducted earlier have taken a hard stance on the issue and corrected any number of mistaken beliefs the aliens had on the subject. This series also involves the fated mate concept, with a ‘Spark’ from the Pyrosian gods sealing the match. This time out the gods presumably amuse themselves by pairing a no-nonsense, hard driving, no time for a mate alien doctor with an equally no-nonsense and somewhat professionally suspicious-by-nature female reporter. She’s busy searching for the ‘gotcha’ in the too-good-to-be-true Pyrosian dating scheme.

Humans and Pyrosians are trying to understand each other better on many fronts and reporter Haley is prepared to uncover the truth. She just never expected to become a mate herself but a terrorist bombing throws her and Torel together and the ‘Spark’ happens, followed by ‘The Scorching’, which is several days of concentrated steaminess as the mate bond works itself out. Haley is a widow, which adds depth to the story and the situation, but was handled with sensitivity. I liked the couple, I enjoyed their scorching romance and attempts to arrive at mutual understanding in and out of the bedroom and I’m eagerly awaiting the next book in the series.

(Scott received a copy of this book from the author for review purposes.)