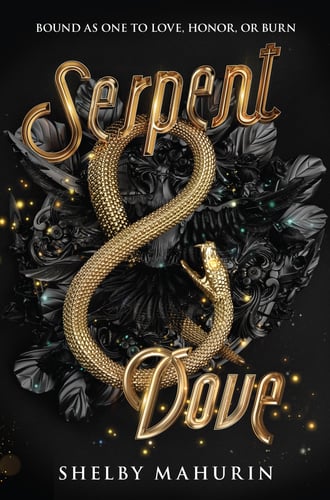 "A brilliant debut, full of everything I love: a sparkling and fully realized heroine, an intricate and deadly system of magic, and a searing romance that kept me reading long into the night. Serpent & Dove is an absolute gem of a book." —Sarah J. Maas, #1 New York Times bestselling author of A Court of Thorns and Roses series

Bound as one, to love, honor, or burn. Book one of a stunning fantasy duology, this tale of witchcraft and forbidden love is perfect for fans of Kendare Blake and Sara Holland.

Two years ago, Louise le Blanc fled her coven and took shelter in the city of Cesarine, forsaking all magic and living off whatever she could steal. There, witches like Lou are hunted. They are feared. And they are burned.

As a huntsman of the Church, Reid Diggory has lived his life by one principle: Thou shalt not suffer a witch to live. But when Lou pulls a wicked stunt, the two are forced into an impossible situation—marriage.

Lou, unable to ignore her growing feelings, yet powerless to change what she is, must make a choice. And love makes fools of us all.

Set in a world of powerful women, dark magic, and off-the-charts romance, book one of this stunning fantasy duology will leave readers burning for more.

This book hit all of my buttons: enemies-to-lovers, witches, historical (AU) France and a very murdery plot. It's a book that I might feel just a little twinge of guilt about loving as much as I do, but that guilt is overshadowed by the emotional ride this book took me on.

Lou is a thieving miscreant on the run from just about everyone. Her mother is The Head Witch in Charge and tried to kill her to fulfill a prophecy. That prophecy? When the HWIC's line ends, so does that of the King. You see, the witches and the crown/church have been at war for decades, ever since the witches were defeated and kicked off their land. Everyone had lived in relative tolerance before the Church took over and declared witches to be evil. Now the witches ARE evil, or at least the ones who stayed in the covens and aren't hiding in plain sight in the city of Cesarine. Witches are publicly burned, but they're not innocent. They capture, torture, and drain the life out of people, living down to what's expected of them. And yes, they're still trying to recapture Lou so her mother can kill her.

Lou is also hiding from the Chasseurs, an elite group of witch-hunters trained by the Church. Reid is a Chasseur captain and after a series of incidents, they're forced into marriage by the bishop. In case you are worried - no one is forced into anything physical and their slow burn angsty-as-heck romance is thoroughly engrossing. There IS an explicit sex scene, reminiscent of those in Sarah J. Maas's ACOTAR series. It's one of the many things that makes me wonder why we don't have a New Adult genre yet.

Even if Reid doesn't know yet that Lou is a witch, he resents his desire for physical and emotional connection because Chasseurs don't usually marry and he feels weak. (He was in love with someone else and their relationship ended because of his duties. He is a virgin, Lou is very not.) Lou hates him for his religious zeal, for literally burning witches, for their forced marriage. I should not have wanted them to be together... and yet I did. Somehow, even after all of the bad, Mahurin shows us just enough of Reid's desire to do the right thing and his ability to love and change to make the romance believable. This is where the guilt comes in. He's a religious zealot for most of the book! How in hell do I, a queer woman, want to read about someone who persecutes people on behalf of the church? Well, I did/do. In this specific instance. Honestly, I think it's because the queer people in the book are wonderful AND because both sides in this case are essentially religious zealots bent on extermination of the other side.

So in summary: I loved this book. It's packed with secrets and romance and adventure. The stakes are high, the danger is palpable, and the tension between the central couple is intense. I didn't laugh, but I did hold my breath or cry at various points. I'm eagerly anticipating the follow-up and only wish Mahurin had a backlist for me to dive into.

Suzanne read this audiobook via her Scribd subscription and then bought a print copy.