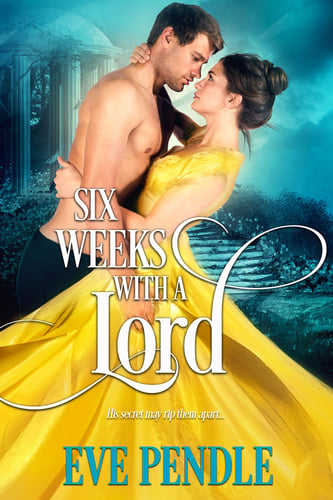 Grace Alnott is out of time. To save her younger brother from an abusive guardian, her merchant father’s will demands she must marry a peer. Handsome but destitute Everett Hetherington, Earl of Westbury agrees to her offer of a marriage of convenience but stipulates she must live with him for six weeks. No matter how honorable he seems she can’t allow him to get too close, because the aristocracy cannot be trusted.

Six weeks. Major Everett Hetherington, new Earl of Westbury, has exactly six weeks to convince the very independent Grace Alnott to spend the rest of her life with him. Despite her belief she doesn't belong in his world, he must tempt the alluring Grace into staying, because he has fallen for her. Hard. He just has to ensure she never discovers his secret.

Review: Six Weeks with a Lord, by Eve Pendle

My opinion of Six Weeks with a Lord varied greatly as I read it, and the origin of my issues: the hero.

Six Weeks with a Lord is a marriage of convenience romance with a fortune hunter (Everett) marrying an heiress (Grace). There is a stipulation attached to Grace’s dowry that in order to get the dowry, she must marry a lord. She needs some of this money to fight for the custody of her brother, the rest of the dowry will go to her husband. Everett is an earl in severe debt because of his dead brother and also the rinderpest wiping out herds of cattle on his lands. And so they marry with the agreement that it will only be for six weeks at which point, Grace will be free to leave with half her dowry. Everett has other plans because he needs her entire dowry and plans to spend those six weeks convincing her to stay so he can have all of her money.

The beginning intrigued me because I wanted to see how they would negotiate their interests. I cared about Grace and even liked Everett, although I did not precisely understand or agree with how they actively omitted details from each other. And then, something happened to my mood and it coincided with when Grace and Everett started having sex.

Let’s rewind, though. Grace has been burned by men. Her father made an absurd stipulation before his death, the man she loved ditched her when he would lose his job and she’d inherit nothing, and then the man her father wanted her to marry (and who has custody of her very young brother) raped her maid. So, it is not unreasonable that she would be reluctant to trust a man. The fact that it takes her time to warm to Everett is something I totally got. Let me just say this, I really liked Grace even when I disagreed with her.

So, Everett... It began as sort of a gut reaction. He never did or said anything that struck me as a red flag, but something wasn’t quite right. Then, they had sex and it became clear. My issue is that while he admires Grace and desires her, he is plotting how to trick her the entire time. He spends so much of the book rationalizing that he simply wants her to stay, but his means of convincing and the knowledge that he has to convince her read as manipulation to me. And when it comes to sex, every encounter comes with an air of calculation when we are in his perspective. At one point, he thinks “All he had to do was tend her need.” Every thought of bringing her pleasure is joined with an element of what will he gain, how much closer he will be to restoring pride in his family name. Often, he thinks of Grace as if a man in love, but even as he thinks of bringing her to climax, he wonders if that will be enough to make her stay because he needs her entire dowry. Every time he wants Grace to stay, it is joined with his worry about debts. Which pretty much makes Grace his pawn, not his partner.

There is also a theme of consent in the book that works until Everett ruins it. They negotiate that he will claim no husbandly rights. If they should become involved physically, it is at Grace’s wish. As Grace wars with her desire for Everett, he is actively working at seducing her. And maybe it’s because the first time they have sex it is more a victory for Everett than Grace, while she’s the only one to orgasm, I was unhappy. The consent is there, but the motive is fuzzy. It isn’t even the omission of his financial situation that bothers me (because he only tells her a portion of what he owes), it is how he approaches their physical relationship as a way to keep and trap Grace.

When Everett finally realizes what he has done to Grace, the revelation felt rushed and not enough. Then, the resolution comes very fast almost with a wave of a magic wand to make everything right, which doesn’t allow for Grace and Everett to figure out how to be together again. And also, what happened to the rinderpest?

One of the hardest things about reviewing a book can be when it doesn’t work for you. And you can feel how the pieces should work, but somehow, it doesn’t. This is where that totally personal aspect comes in because I can see Six Weeks with a Lord working for a number of people, it just did not work for me.

Now, a sidebar on the queer characters:

Everett’s brother, George, is queer, seemingly bisexual, and in love with his wife, Sarah, and his lover, Charles. As Grace and Everett are trying to proceed in the custody battle, Sarah threatens to divorce George on the grounds of adultery, and likely for being a sodomite. This divorce and the possible hanging of George would make the custody battle that much more complicated.

I am always nervous about the inclusion of queer secondary characters because too often in f/m romance, the queer characters are used as plot devices or convenient villains. George is a plot device. Further, while Everett will say that he has no problems with who his brother sleeps with, he very clearly views his brother as a problem, a hindrance to his happiness. There is a brief hint that while not evil, George is a villain who will destroy everything for the main characters by his need to be with his lover.

Without a doubt, we need characters with diverse experiences throughout historical romance (and romance as a whole), but it is important that these marginalized people are not present merely to disrupt the plot or make you pity the main characters. There is an important line that divides pretending there were no queer people in Victorian England and writing them only as problems. It isn’t a one or the other situation. A queer character can be in an f/m historical romance without messing up everything for the lovers. What we need more of is romance that allows queer people to just exist.

Content warnings: a secondary character’s rape is mentioned repeatedly, the heroine fears being raped by her maid’s rapist and also by her husband, the hero has some messy thoughts about consent (at one point thinks about how he could force himself on the heroine), there is likely physical abuse of the heroine’s brother mentioned, the realities of criminalized homosexuality are mentioned a few times