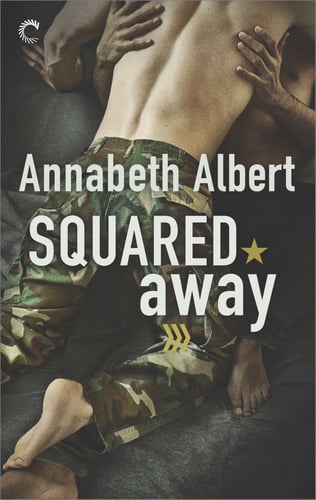 Review: Squared Away, by Annabeth Albert

SQUARED AWAY is the fifth book in Albert’s Out of Uniform m/m series, which is about Navy SEALs falling in love. Showing up for a series on the fifth book is just as unlikely for me as reading a series with characters in the military (usually too stressful for me), but in this book, Albert wrote a demisexual character, and I will read almost anything with a character on the asexuality spectrum.

Ignoring my very specific reason for reading the book, SQUARED AWAY is an okay book. It revolves around a custody battle between Mark, a Navy SEAL, and Isaiah, a recent college graduate. Aside from a prologue, the book opens with Mark being called back home after the death of his sister and brother-in-law. He returns to find his brother-in-law’s cousin, Isaiah, taking care of the kids. There is a tiny bit of history between Mark and Isaiah because in the prologue, Isaiah propositions the older Mark, which did not end well. The rest of the book is essentially the two characters really getting to know each other and learning to feel valued.

In general,  SQUARED AWAY is a serviceable distraction that doesn’t really ask for much; however, it’s not a perfect book. Amongst my general problems are that the kids exist as plot devices. They are the source of the central tension, but barely exist for anything beyond the custody battle and to bring Mark home. Building on that, there is very little conflict in the book, not enough to really sustain a book this length. And something to note, that I’m not the right person to analyze, is that Isaiah and the children are described as biracial, but beyond that being mentioned once, their race doesn’t seem to inform their experiences.

Now, for the reason I read SQUARED AWAY. It’s not something I discuss a lot, but I do identify as demisexual, sometimes more asexual. I can write a meandering essay on how sexuality changes, is unpredictable, and often confusing, but I won’t. The increase in characters on the asexuality spectrum that we are seeing lately has been nice, but the flip side of that is general unease because, like any marginalized identity, writing an a-spec character is tricky. I barely expect a-spec authors to do it well, and I lean towards doubt when an allosexual author writes an asexual character. So, imagine my surprise, in terms of the representation of a demisexual character (Mark), SQUARED AWAY does a fair job.

It’s obvious that Albert used a lot of care in writing Mark and giving him the words to describe his sexuality, or really the very relatable “I don’t know, it’s hard to explain” sort of words. When Mark says, “Like I’ll know someone a long time, and then they’ll say something nice or do something for me, and all of a sudden I’ll realize I’m turned on,” that hit me so directly that I teared up and wished I could somehow highlight an audiobook and hand out copies of that section. And the fact that Mark is uncomfortable with labels, uneasy about the terms we all try to use to pigeonhole each other, was so accurate that I could write an essay on it as noted above.

However, it wasn’t a perfect characterization. The biggest issue I have about how Mark is treated by the book is actually more about Isaiah. My problem was that Isaiah is too perfect, too gentle, too worried about scaring Mark. This is something you notice most with romances with marginalized characters: a partner who asks for nothing and hands over all control to the marginalized character. As I read SQUARED AWAY, I kept thinking that I would have left if I was treated like a fragile object my partner was afraid would break. The problem is less Isaiah being careful and more that Isaiah never really asks for anything more than what Mark offers, which sounds romantic until you remember that every step in their relationship is really up to Mark. Isaiah gives up all control to make Mark comfortable, but what is Mark doing for Isaiah? Is it a partnership if one person is always afraid that their needs will scare the other?

Something to note is that, as with anything, experiences vary. The fact that I can relate to Mark’s perspective doesn’t mean that my experience, or his fictional experience, is representative of every demisexual person. My grouchiness over the perfect partner who asks for nothing is obviously my grouchiness.

So, in the end, SQUARED AWAY is a decent book, with a quite good depiction of a demisexual character, but not terribly compelling.