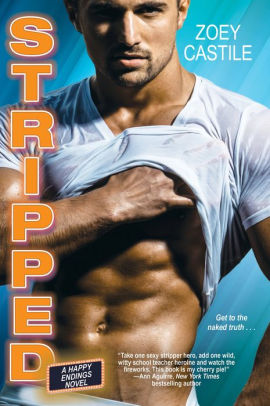 Skilled, sculpted, and sexy, the men of adult entertainment are the kind of guys a woman reserves for her fantasies, not her reality. But is there more to these professional hotties than meets the eye? . . .
The day Robyn Flores meets Zac Fallon is one of those days. You know, when you’re already late for work. Mostly because you haven’t really slept since your best friend abandoned you for her fiancé and her exponentially better life. The kind of day you drag yourself to the cleaners to pick up your laundry, only to discover you’ve got the wrong bag—Star Spangled sequined thong, anyone? So Robyn is definitely not ready for the ridiculously gorgeous guy at her front door, except that they have each other’s clothes. But then, is any woman ever ready to meet the love of her life?
There’s just one problem: Zac Fallon is not the love of Robyn’s life. Zac knows, despite the all-too-intimate dinner they share, he doesn’t have a shot at her. Because the next time Zac sees Robyn, he’s front and center of the male revue headlining her best friend’s bachelorette party. So much for wooing the pretty schoolteacher, much less impressing her old-fashioned family, with his upstanding lifestyle. Now he’s only got one way to win his dream girl. It’s gonna be the steamiest, most irresistible seduction she’s ever seen. And this time it will be no act . . .

Zac Fallon has been stripping for 10 years and he has always loved everything about it. He loves making women smile, being in the spotlight, the camaraderie with the other guys in the show, the freedom to travel and the money. But he just doesn’t quite love it as much as before - something is missing in his life.

Robyn Flores had it all together once. She is the one who did everything right but ever since since her

best friend, Lily, the wild one of their duo, got engaged and started settling down, her life has started falling apart. She is happy for Lily, maybe a bit jealous of how together and happy she seems, that she can’t bring herself to tell Lily about how much she struggling. Robyn can barely get to work on time, is coming dangerously close to losing her teaching job and has little clue of why she can’t bring herself to care.

This Magic Mike XXL-inspired romance by Zoey Castile (who writes YA as Zoraida Cordova) was a roller-coaster - part frantic romantic comedy, part angsty relationship drama. While there are lots of glitzy and sexy scenes, what I loved were the quieter romantic moments that let me see why Fallon and Robyn were getting so wrapped up with each other so quickly. Castile captures the allure of someone who listens but might not be there to judge one’s bad choices the next day, especially as Robyn struggles to figure out what she wants to do, not what she thinks will please the people in her life.

“But he listens to every word and, somehow, the space between us on the couch disappears and we’re sitting side by side...”

I also I really like the frank moments late in the novel where Lily and Robyn finally face why their friendship is floundering and it was interesting to contrast the state of their relationship to that of Fallon’s with Ricky and Aiden.

“... they want the spectacle. I want someone who might see more in me.”

The ‘Magic Mike Life” that Fallon is living is losing its charm after 10 years. Hosting an apartment-full of women for an after-party, just feels like a chore rather than a perk. But is an adjustment to become someone’s boyfriend, even a temporary one. Castile does a good job presenting the double edged ness of Fallon’s career. While he has plenty of people who get it and support him simple small talk with Robyn friends and family feels like traps, intentionally or unintentionally. Fallon is ready for something new, for a change, but outside of loving Robyn what that new thing was left too vague for my liking.

I got a little tripped up in the early chapters by several eyebrow-raising references related to Robyn’s teaching (how can any teacher avoid meeting their new principal for two months? Do they not have faculty meetings?) but if anything, it showed how checked out Robyn was from her career and her life in general. Her gigantic heavy work bag she lugs back and forth to work did make me feel seen. I also appreciated that she frequently considered filling out union incident reports because she was certainly entitled to have done so. The whole storyline with Lukas, her inappropriately fixated principal was an ode to trusting one's instincts when other people think someone is okay.

There is a lot to like in this romance and I am intrigued enough by a lot of supporting characters, particularly Ricky the lead choreographer and organizer of the crew that I will come back to the Happy Endings series again.

If you are looking for a Magic Mike XXL-inspired romance with a sweet hero that doesn’t sugar coat the challenges, is full of emotionally messy people, set in a NYC that is as diverse as the real one and has just enough humor to balance the angst you should check this out.

I received an ARC for this book for review consideration from its publishers, Kensington.