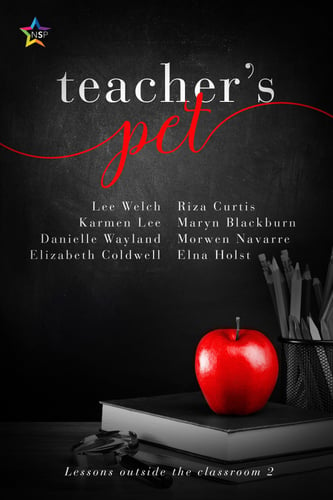 A Spell for Master Vervain by Lee Welch
Apprentice magicians aren't supposed to fall for their masters, but after a year of longing, Kit is desperate for Master Vervain. Kit casts a forbidden spell to raise an incubus doppelganger of his master--oh, the things he'll do with that incubus! But Kit's invoking forces he can't control and anything can happen when love and magic are mixed.

Finding the Words by Elizabeth Coldwell
On a simple night out, Brendan's life changed forever. He gave up college lecturing for the world of private tutoring. He may be a virtual recluse, but at least he's safe. When student Zack approaches him for help with understanding poetry, he's reluctant to take him on, afraid any connection to his old life might stir up the memories.

Being around Zack awakens long-buried desires in Brendan. He wants to act on his impulse to get closer, but he needs to find the words to say how he really feels.

The Silent Treatment by Elna Holst
Reverend Jane Sinclair has been preaching nothing but fire and brimstone lately. After being dumped by her long-term partner, her mood has been going from bad to worse, and it deteriorates further when her vicar strong-arms her into going off on a yoga retreat. Once she arrives at Serenity Farms, however, the sultry and playfully dominant yoga instructor soon has her singing quite a different tune. A very, very quiet one.

One Small Step by Riza Curtis
Student mage Ilya regrets not paying more attention in class when he teleports two hundred miles instead of the hundred yards he was supposed to go. Concussed, exhausted, and completely underdressed for the bitter winter weather, Ilya is rescued by the handsome Søren.

Sparks fly between the two mages while Ilya recovers, but Ilya must return home. Unable to use his magic and not skilled enough to attempt teleporting back, even if he could, Søren insists on making the journey with him. But train rides and bandits reveal something more between them.

Shedding Doubt by Danielle Wayland
Twenty-six-year-old Grayson is on a mission to get the most out of his gym membership, but when he goes at it too hard on his first day and slips off the treadmill, embarrassment makes him want to quit. Heath, a gym rat, rushes to his aid and offers to help. Initially suspicious of his motives, Grayson reluctantly accepts his help.

The more time they spend together, the more their friendship grows. They both have internal battles keeping them apart, but a Halloween party might just be the place to have a heart-to-heart.

Academic Temptations by Karmen Lee
Twenty-three-year-old Savannah Archer has kept her sexuality buried for years out of fear of being ostracized by her disapproving community. After getting pregnant in high school and putting off college for five years to raise her son, she is finally attending college--away from the prying eyes.

In her first class of the semester, she meets Anetta Springs, who is not only her professor, but also her academic advisor, and the attraction is immediate. Savannah and Anetta both know that the potential consequences of a teacher-student relationship are life-changing, but a book club and a meddling sister may not give them a choice.

The Sidhe's Apprentice by Morwen Navarre
For anyone serious about magic, studying with a Sidhe Master is essential. Alistair Brady is very serious, and when he's chosen at a Calling--a search by the Sidhe for new students--he's elated. However, his assigned Master, Cianán, doesn't want a new student and makes it painfully obvious.

Despite Cianán's disdain, Alistair is determined to learn magic. But Alistair has difficulty finding the place inside where magic lives, and even the simplest spells continue to elude him. He just needs to figure out what's missing, while trying not to let his growing attraction to the cold and aloof Cianán show. It takes a backfiring spell to show both Alistair and Cianán exactly what's missing to make Alistair's magic come alive.

Press "Copy" to Begin by Maryn Blackburn
Dr. Marissa Muniz worked hard to earn her Ph.D., so she is rightfully outraged when she detects plagiarism in the work of wealthy grad student. When Muniz confronts Libby Highsmith, the young woman begs for a second chance.

Ms. Highsmith must propose a new master's thesis and design a project to serve as punitive measures. Muniz accepts the thesis proposal but balks at the project--a replica of the paddle used in private schools and a contract promising secrecy.

Teacher’s Pet, Vol. 2 is the second anthology from Ninestar Press that features stories about student/teacher relationships. However, in most of the cases the teachers are private tutors, yoga or gym teachers or similar. In the stories that are set at a university, the couples agree to wait till the semester is over before they get serious, so they can avoid issues with power-imbalance. The one exception to that is the one story in the anthology that is erotica rather than romance (Press “Copy” to Begin) and in my experience erotica tends to be less concerned with reality anyway.

Three of the stories are contemporary f/f. Of those I enjoyed Elena Holst’s The Silent Treatment most. Jane Sinclair is a reverend who tries to get over a bad break-up by going to a weekend-retreat. The yoga-teacher there ends up showing her much more than just how to do the downward dog. Jane feels very lifelike, even in the few pages of the story her strengths and flaws came through. So even my grumpy ‘but I’m not really into contemporary romance’ heart melted.

I wasn’t quite as blown away by Karmen Lee’s Academic Temptations about Savannah who got pregnant during High School and now that her son is old enough for pre-school she wants to start college. During her literature class, the professor catches her eye. When she invites Savannah to her book club, she’s only too eager. There were some very likeable side-characters, but it didn’t capture me the way Holst’s story did.

Three other stories are fantasy and all of them feature m/m pairings. In Lee Welch’s A Spell for Master Vervain, Kit, a student at a magical academy, has fallen for one of his teachers and tries to summon an incubus who looks like his teacher so he can satisfy at least some of his urges. Only the spell goes wrong in a rather unexpected way. The story was cute but very focussed on the physical aspects. Even though Kit doesn’t only lust for his teacher because he’s so hot, the mentions of ‘But we also have great chemistry during out tutoring sessions’ seem almost like an afterthought. The focus is mostly on the sexual attraction and while there’s nothing wrong with that it’s again…not my thing.

In Morwen Navarre’s The Sidhe’s Apprentice Alistair passes to the realm of the Sidhe to learn magic. And Cianán, his teacher moves more in Alistair than a desire to be a good wizard. However, there is something else going on: Cianán already taught Alistair’s grandfather and something horrible must have happened during his apprenticeship but Cianán doesn’t want to talk about it. I think the story might have worked better for me if it had been longer. As it was, it just rushed from one major event to the next and barely gave me time to get to know the characters inbetween.

While the world of Welch’s and Navarre’s story is more historic-fantastical, Riza Curtis’ One Small Step is set in a world that looks like our present day only with magic. Ilya, a mage-in-training badly messes up a teleportation spell: Instead of landing in the school-yard he ends up halfway across the country. Fortunately, he lands in the garden of Søren, another mage who happily gives him some private lessons. And later more.

This story should have been right up my alley – there was magic, and the characters were cute – but things didn’t really fit together. Ilya isn’t really incompetent (he is extremely powerful – of course), but his teachers are. All of them. And their teaching-methods who seem to work well with all the other pupils fail him. So Søren can waltz in and save the day (and Ilya’s upcoming exam) with his own methods and the two have a reason to stay together for the tutoring. And that’s a rather cheap trick to make two characters stay together.

The remaining two stories are contemporary m/m. Elisabeth Coldwell’s Finding the Words features Brendan, an English lecturer who lost his leg and his partner when a bomb blew up the bar they were celebrating Brendan’s birthday in. Since then he’s quit his job at college and only gives private lessons. Several years after the attack he still can’t go out in public for long or stay in crowded places. One day he starts tutoring Zack who is in danger of failing his classes because he can make neither heads nor tails of poetry. Soon, Zack wants more than English lessons, but Brendan feels insecure about another relationship, let alone with someone much younger than him.

Things were going a bit too neat in that story. Brendan needs only a few words from his pupil and suddenly he’s fine with going out again, one question and he tells him everything about the traumatic events, one assurance and he doesn’t worry about his scars upsetting anyone…At the same time Zack goes from almost failing his English class to proudly taking part in a poetry slam very quickly. Of course, things do go quickly in short stories but since it dealt with heavy topics like PTSD it became very noticeable how fast things were progressing.

In Dannielle Wayland’s Shedding Doubt Grayson joins the gym to get into shape. Heath offers to lend a hand with the training. What then follows is a story that could be right from a glossy weight-loss magazine (with more sex at the end): Everything goes perfectly: Grayson immediately throws out all his junk-food, learns to cook things that are tasty and healthy, he keeps losing weight and slowly but steadily gets better at the gym. He never gets stuck somewhere and feels he can’t lift that weight/do more push-ups, he never has any cravings for fatty foods (the closest thing to that is him asking Heath if he could make one exception and Heath telling him that one exception leads to two, then three and then it’s too late anyway and he could as well never have bothered with anything). Everything is always perfect. Of course, not every story needs to be dark and depressing. Hopeful stories are good. And it would have been a hopeful story if we saw a setback in Grayson’s progress and how he overcame it. But there weren’t even tiny setbacks. Only perfection. And that made me feel as if I shouldn’t even bother trying because I know that anything – from keeping fit to learning a new language – won’t work as perfectly for me.

I fully admit that I am probably not the best person to judge this collection. I picked this up, assuming there would be more diverse settings but ended up with one that’s almost completely contemporary, which is something I rarely read. But, even while trying to keep an open mind about everything, I wasn’t too overwhelmed by this anthology. Both the contemporary m/m left me with a rather bad taste and while I didn’t have any problems with the rest, they did leave me rather cold.