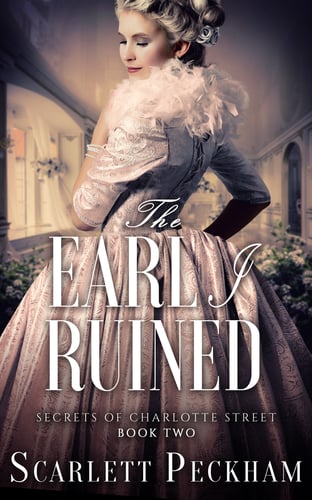 When Lady Constance Stonewell accidentally ruins the Earl of Apthorp’s entire future with her gossip column, she does what any honorable young lady must: offer her hand in marriage. Or, at the very least, stage a whirlwind fake engagement to repair his reputation. Never mind that it means spending a month with the dullest man in England. Or the fact that he disapproves of everything she holds dear.

He’s supposedly the most boring politician in the House of Lords...
Julian Haywood, the Earl of Apthorp, is on the cusp of finally proving himself to be the man he’s always wanted to be when his future is destroyed in a single afternoon. When the woman he’s secretly in love with confesses she’s at fault, it isn’t just his life that is shattered: it’s his heart.
They have a month to clear his name and convince society they are madly in love…

But when Constance discovers her faux-intended is decidedly more than meets the eye—not to mention adept at shocking forms of wickedness—she finds herself falling for him.
There’s only one problem: he can’t forgive her for breaking his heart.

Review: The Earl I Ruined, by Scarlett Peckham

This book ruined me. Even if the title was not The Earl I Ruined, I would have written that sentence, but now it’s there for posterity as some sort of dad joke. The truth is that this book hit the right chord and I couldn’t stop reading it. I whined about how I had to go to work when all I wanted to do was call in sick and finish this gorgeous story. Also, this book has one of my favorite complicated heroines too.

So, the book is really about two people who have been into each other for years, but who have either refused to admit it or refused to act on it for a variety of reasons including previous rejection, embarrassment, and shame. Constance is one of the most challenging heroines I’ve read. She is vibrant, the life of any party, and a gossip. However, she believes she uses gossip for good until it is not and her bawdy poem about Julian’s proclivities is published and he is ruined. Her solution to repair his reputation is a fake engagement during which time she’ll charm everyone and restore his standing and save his bill. And Julian agrees with the scheme even though it means he has to work even harder at hiding how he feels about her.

Anyway, I have spent the last few days trying to find the words for what this book does so well and I’m not sure I have. It’s as if Peckham is scraping at truths to reveal what’s really there.* There is so much between Constance and Julian, years of hurt and misunderstanding and desire, and the story demands honesty from them at every turn. The book requires them to grow and be better, and it’s only with their time together that they can be more honest and the best versions of themselves. Constance has to learn a humility and also how to be truly vulnerable with others. And Julian has to learn how to be honest and vulnerable too, to allow someone to see him for all of his choices and passions, and to trust.

The book really revolves around trust and a lack of it. Constance has ruined Julian’s political reputation and against all odds, he has to place his future in the hands of a person who has already proven herself reckless. While the journey for both characters is important and great, the real story is how Constance is revealed. In another’s hands, she could have been flighty and intolerable**, but Peckham demands so much of her heroine. One truth is never enough because it’s couched in their expectations and biases. Each confession of how she feels and about the events from the past comes as Constance breaks open just enough to allow Julian to see that the vivacious beauty he adored is just a small piece of Constance. Nothing is easy until Constance opens herself up completely to how she feels and what she wants and understands why her choices were not always the best. The book is such a great character study and allows the characters to falter and succeed and be perfect for each other only when they are ready.

Before I am tempted to write sentences that make looking for your truth seem like geology field camp***, I do want to sit with the fact that Constance is a genuinely complicated character. She has built an armor up around herself to protect herself. She may be the life of the party, but she’s also a vulnerable young woman accustomed to the fact that no one truly sees her. People like her for her charm and ease, but they never get to know her. This mistake with the poem that leads to the fake engagement is her wakeup call to how her actions have real outcomes that hurt people. And the entire book takes its time making her face herself and what she deserves. The same is true of Julian. There is almost a bookend to the romance in that her rash behavior forces them together while his rash actions almost tear them apart. And the romance revolves around Constance’s words: “...love is not a declaration. It is a system of behavior.”

Anyway, I loved this book. There’s such honesty, care, and love in this book.

*Be proud of me for not making a fossil preparation analogy.

**Think of those fossils where instead of the mineralized structures actually revealed and freed from the rock, someone has just painted over where the bones and/or scales are. (If you look at fossils collected in the 19th century from Lyme Regis, you’ll know what I mean; casts of fossils for mass production also have this.)

***No geology or paleontology in this book. You are safe, I am weird.