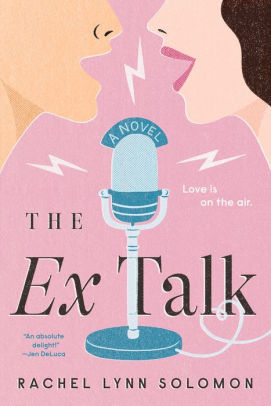 The Ex Talk very much appealed to the NPR nerd in me, so if you like romance and you like public radio, you probably don't need to read the rest of this review.

The Ex Talk pairs Shay, a public radio producer, and Dominic, a fresh-out-of-journalism-school reporter. Shay is a few years older than Dominic and she resents the fact that he's so recently come to the station and is already getting to be on air. She's been there for years and been held back by a "not-NPR" voice and a misogynistic boss. They have a sort of low-key antagonistic relationship and when their boss announces layoffs, they're paired up on a show Shay randomly came up with in a meeting. The premise is that two people who were once in a relationship will talk to guests and listeners about relationships.

The problem is that they've never dated. So they fake it.

I love fake dating and public radio, so I sort of hand-waved the ethical issues here. I loved the banter and the pretending-to-be-exes-while-falling-for-each-other premise. They're both lonely in a big city (Seattle) and Rachel Lynn Solomon does a great job of capturing Shay's persistent grief over losing her father as a high school senior and Dominic's isolation after moving back to his home city, leaving his only long-term girlfriend for this job. She also digs into why each of them wants to work in public radio, which at a couple of points works against her since they're both so passionate about the truth but lying their butts off.

I had a couple of quibbles with the way that the deception is revealed and the aftermath, but overall it was really well done. The story is told entirely from Shay's point-of-view, which worked well with the single-narrator audio.

In a land of trauma books disguised as rom-coms, I think this one fits the marketing. It's funny, it's packed with banter, the characters have all kinds of chemistry and the loneliness and grief aspects aren't so heavy that they diminish the fun.

It was just what I needed three days before Inauguration.