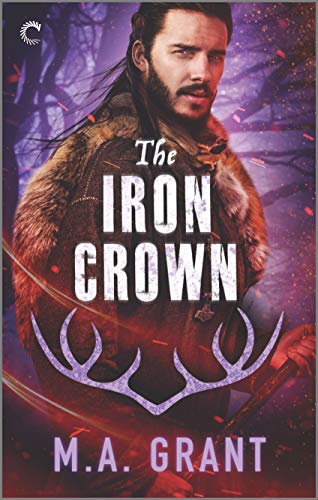 The Iron Crown is the third book in M.A. Grant's m/m fantasy romance series and I think it's my favorite. The first book is enemies-to-lovers and contains a fair bit of torture and a brewing war. The second is friends?-to-lovers and again... torture and war violence. This one contains a friendship-to-lovers romance SEVEN HUNDRED YEARS in the making. Lugh's human bodyguard/best friend Keiran has been by his side since Lugh was a young teen and rebuffed Lugh's sexual advances once when Lugh was an older teen. And then 700 years passed and Lugh is still convinced that Keiran wants nothing romantic from him. They sleep next to each other every night, they comfort and encourage each other, they do everything a long-term couple would do. And they're absolute idiots. Seriously. 700 years of pining.

Readers will be swept up in the political and strategic events, but the romance is never shoved to the back burner. Grant's plotting and pacing skill is evident in the balance of internal and external conflict, even if the book does run longer than I really had the patience for.

As a series reader, I was especially happy that Grant brought back the previous two couples but didn't let them steal the show. Those four men were naturally integral to the war planning and action, but unlike many other series, this final book didn't lose its way in wrapping up the previous romantic arcs.

In all, The Iron Crown was a satisfying conclusion to a great series. I look forward to more!