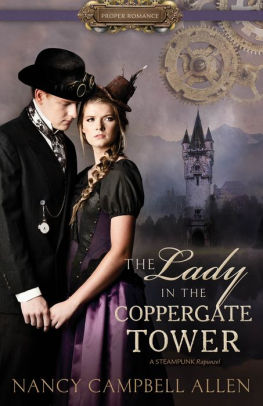 Hazel Hughes has spent her life believing she is a Medium—someone who can talk to ghosts. But as of yet, that skill has remained frustratingly elusive. She is also suffering from a reoccurring childhood dream of someone who looks almost exactly like Hazel, but this dream version of herself is slowly going mad.

Sam MacInnes is a talented surgeon who runs in the highest social circles thanks to his family’s position and history. When Sam hires Hazel to assist him with his medical practice, he is immediately drawn to her intelligence, wit, and beauty. Their potential relationship is derailed one evening when a mysterious count arrives in London and reveals to Hazel the truth about her past: she was abducted at birth and her twin sister has fallen dangerously ill.

Hazel agrees to travel to Romania with Count Petrescu in order to save her sister, and Sam insists on accompanying her. The count has secrets, though, and the journey grows more sinister with every mile that draws Hazel closer to her homeland. Even as her feelings for Sam become deeper and more complicated, she fears she might not survive the quest to save her sister with her heart intact, not to mention her life. She must learn to draw on gifts she doesn’t know she has if they are going to ever return home again.Hazel and Sam must fight their way past dark magic, clockwork beasts, and their own insecurities as they try to reach her sister in the impenetrable Coppergate Tower before time runs out.

Review: The Lady in the Coppergate Tower, by Nancy Campbell Allen

Hazel’s been dreaming about a girl who - except for hair and eye colour - looks exactly like her for as long as she can remember. But the dream girl never says or does anything extraordinary, so Hazel has accepted it as a slightly odd thing and otherwise leads a normal life. She has some healing abilities and uses them in her work for surgeon Sam McInnes. He’s rich, charming, good-looking and way out of her league. But then her dreams are beginning to worry her. The girl in it is showing signs of fear and madness. Hazel’s life gets turned further upside down when the mysterious Count Petrescu appears. He tells her that he’s from Romania and that she has a twin-sister there…one who looks exactly like Hazel, except for hair and eye-colour and who is slowly going mad. The Count is convinced that Hazel is her only hope. He asks her to accompany him to Romania and she agrees - and so does Sam who does not trust the Count and fears he might not have the best interest of Sam and her twin at heart.

The trouble with this book is that both the romance and the fantasy seem quite half-hearted. Hazel already feels more than friendship for Sam at the beginning of the book, but she’s also convinced that the difference in status means that there is no chance of a romantic relationship between them. And she’s not terribly bothered by that…or bothered at all. Now I am very much here for characters who won’t let themselves be defined by being unhappily in love but Hazel’s feelings for Sam seem more like a celebrity crush - something she is fully aware is impossible but nice to daydream about occasionally.

Sam, meanwhile, sees her first as a very competent co-worker and then as more but doesn’t think she feels the same way, so he shrugs and moves on. So, it’s quite fitting that when they find out that their feelings are in fact reciprocated, they essentially go well, that’s great, kiss and then go back to business as usual. Even in a book that is more fantasy than romance I would have expected emotions to play a bigger role.

I admit, if the fantasy part had been good, I’d still have enjoyed this book and even recommended it with the caveat that it’s not much of a romance but that at least Sam and Hazel are likeable characters. But sadly, the fantasy plot was also lacking… mostly lacking tension.

Hazel and Sam quickly agree that the count has some sinister motives but Hazel still wants to accompany him to help her sister. And so, they travel together…and at no point is there any doubt about the count’s sinisterness. So as the reader, I also wasn’t exactly on the edge of my seat, wondering if he’s one of the good guys or not. There was, of course, the question of what his plan was but most of the time it wasn’t treated as a particularly pressing question. They occasionally bring it up, acknowledge that they have no idea and then…shrug and move on. This seems to be a theme. (Granted, they do make attempts to find out more but when those are fairly unsuccessful they…you guessed it).

All that leaves us with a book about two people who…just get through the plot but - with some exception - have few strong emotions about the things happening around them. And that results in me also not feeling much about it.