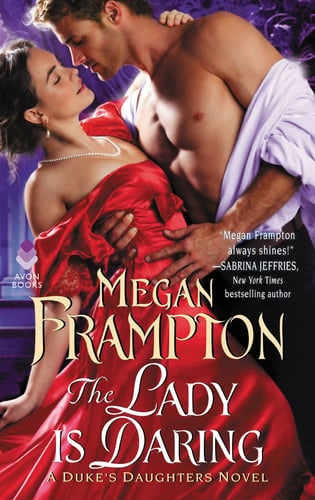 Five well-bred sisters, one sensational scandal. Now the Duke of Marymount’s daughter Ida is about to find love in the most unconventional way . . .

It was easy for society to overlook Lady Ida Howlett; they found her bookish, opinionated, and off the marriage mart. But little did they know that behind a calm exterior beats the heart of an adventuress, one who, determined to discover her runaway sister’s whereabouts, steals a carriage and sets off on a daring mission. Then she discovers she’s not alone! Bennett, Lord Carson, is inside, and he refuses to leave.

Lord Carson’s plans had always been to find a soft, gentle wife who would run his home and raise his children. Still, he makes a bargain with Ida—he won’t desert her during her mad adventure. He’ll make sure she’s safe, and then find a suitable lady to fall in love with. But when rules (and garments) become discarded during this long, intimate journey, it’s soon clear that this surprisingly daring lady is the woman he’s needed all along.

Review: The Lady Is Daring, by Megan Frampton

Sometimes I want to live in a haze of fluffy romances filled with heroines who are underestimated and stodgy heroes who need to loosen up. And The Lady Is Daring fit the bill perfectly. Is there some suspension of disbelief needed? Obviously. Is there a moment of “I know something bad is going to happen, why don’t the characters see it coming?” Yes. But here I am before you as someone who loves wrapping herself up in these stories.

Ida is a too-smart and too-direct woman. Bennett is too busy trying to keep his family from sinking into debt to bother courting wealthy women who could help save the family. And like others in their circle, he is accustomed to ignoring Ida for her directness and obscure topics of conversation,* until Bennett spends some actual time with Ida. Now, he has sort of/almost been engaged to two of Ida’s sisters (one married his younger brother, the other married his best friend), but Ida is the first Howlett sister that he has actually taken time to get to know.

This is a book about two people looking to escape the limits of their lives. Bennett wants to just take a break and stop worrying. Ida wants to find her missing sister (she ran off with a dancing teacher and has a child) and never have to marry or tame her personality. Here is where the plot takes them on a road trip, they find they like each other, they do some stuff, and they find Ida’s sister, Della. But the plot is the set dressing for the look at two people trying to find a place to be themselves.

Another way this book is my catnip is that it’s about family. Ida wants to find Della because since she ran away, the remaining sisters have found friendship and companionship with each other, something they lacked before their sister was a scandal. And Ida’s selling point for Della to come home is that Della would not be alone, that the sisters would stand together for her and with her. Similarly, Bennett learns to lean on his brother to lessen his burden and to care for the people who care about him.

Now, while I did read book one in the series (it didn’t work for me) and I didn’t read book two, The Lady Is Daring can really stand on its own. So, if you want a road trip with a bluestocking and a stodgy hero as they try to escape and solve their problems, you might just enjoy The Lady Is Daring too.

*Please note that Ida and I would have amazing discussions on manufactured gas, if one could have conversations with fictional characters.

Margrethe listened to the audiobook from her library’s Overdrive selection.