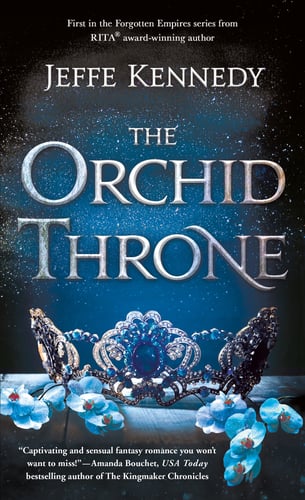 In the Forgotten Empires magic is forbidden, dreams are destiny, and love is the greatest power of all…

A PRISONER OF FATE
As Queen of the island kingdom of Calanthe, Lia will do anything to keep her people free—and her secrets safe—from the mad tyrant who rules the mainland. Guided by a magic ring of her father’s, Lia plays the political game with the cronies the emperor sends to her island. In her heart, she knows that it’s up to her to save herself from her fate as the emperor’s bride. But in her dreams, she sees a man, one with the power to build a better world—a man whose spirit is as strong, and whose passion is as fierce as her own…

A PRINCE AMONG MEN
Conrí, former Crown Prince of Oriel, has built an army to overthrow the emperor. But he needs the fabled Abiding Ring to succeed. The ring that Lia holds so dear to her heart. When the two banished rulers meet face to face, neither can deny the flames of rebellion that flicker in their eyes—nor the fires of desire that draw them together. But in this broken world of shattered kingdoms, can they ever really trust each other? Can their fiery alliance defeat the shadows of evil that threaten to engulf their hearts and souls?

Jeffe Kennedy starts a new series with The Orchid Throne, a romance that's more fantasy than love story... for now. While the female MC's point of view is reminiscent of the YA novel The Belles in attention to details of architecture, dress and makeup, the male MC's point of view is gritty and violent. The contrast is deliberate, however, as young Queen Euthalia is determined to defend her island of Calanthe, the only kingdom not violently conquered by the Emperor, by other means. Euthalia's power lies in both magic and political cunning, while former Prince turned King of Slaves Conri's power lies in brute strength and reluctant leadership.

The novel feels very much like a first-in-series entry, with lots of worldbuilding and what I can only call "fantasy names." It took me a solid third to figure out who was who and what they were doing. (Epic fantasy has been tricky for me the last three years.) Con has been a slave for the past decade, working to mine the toxic substance (magical napalm/dynamite) that allowed the Emperor to destroy his kingdom and kill his family. He organizes a slave rebellion and, with the help of a wizard and two trusted comrades, begins liberating cities throughout the realm. Said wizard tells him he has to marry Euthalia to defeat the Emperor, but she's been engaged to the Emperor for years, putting him off with a variety of maneuvers.

They don't meet until about halfway through the book, which was my first signal that this was not going to be a one-book romance. I was really hoping it would be like some other series, in which each book follows a different couple, but I think we're sticking with the same all the way through. Unfortunately, I don't like either of them. Since this is a romance, I don't think I'm spoiling anything by telling you that they do get married at the end and I guess they like each other. But the marriage is after 90% of the way through the book, and they have sex at something like 94%. She's been having sex with her Ladies in Waiting for years (weird power dynamic there), but has preserved her vaginal virginity for the Emperor. (There's some gross discussion of keeping her passage tight.) He's a virgin because he watched his sister get raped as she was murdered and has been a slave or engaged in battle ever since. Their consummation consists of some making out and then him bending her over a desk and entering her in one quick thrust. It's over very quickly. I had hoped for more time with them discussing how to make sex pleasurable for each other, but she lets him cause her pain because she expects it even though she lives on a pleasure island and knows better. Jeffe Kennedy can and does write better sex, so I'm not sure why I had to read this. The scene was at the very end of the book, was uncomfortable to read and didn't make sense. I'd rather she closed the door since it added nothing to the story. (There's also some misuse of the word vulva, but I hope that's fixed in the final copy.)

The book ends without them confronting the Emperor, so I assume the next couple of books will be them figuring out how to be a powerful married couple, harnessing their power and magic, and kicking butt. Here's my summary: The Orchid Throne works well as a fantasy novel, but not as a romance.