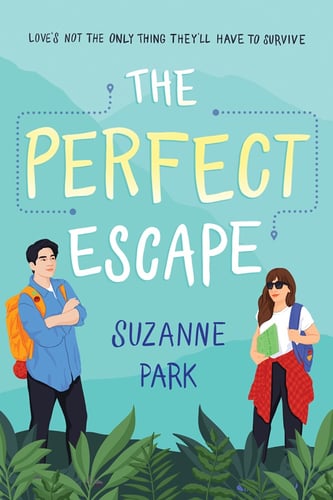 Love is a battlefield in this hysterical debut, perfect for fans of Jenny Han.

Nate Jae-Woo Kim wants to be rich. When one of his classmates offers Nate a ridiculous amount of money to commit grade fraud, he knows that taking the windfall would help support his prideful Korean family, but is compromising his integrity worth it?

Luck comes in the form of Kate Anderson, Nate's colleague at the zombie-themed escape room where he works. She approaches Nate with a plan: a local tech company is hosting a weekend-long survivalist competition with a huge cash prize. It could solve all of Nate's problems, and she needs the money too.

If the two of them team up, Nate has a real shot of winning the grand prize. But the real challenge? Making through the weekend with his heart intact...

The Perfect Escape opens with a zombie attack! Okay, not a real one. High-school seniors Nate and Kate work together at a zombie-themed escape room, each saving money for a different reason. White Kate's controlling tech-CEO father demands that she enter the family business after high school, but she wants to go to NYC to pursue her theater dreams. Nate's Korean-American immigrant family has financial struggles and he wants to be able to afford college so he can get rich and help them/never worry about money again.

Their romance builds slowly, with Nate initially interested in his long-time crush on another girl and both of them so focused on their futures that relationships are low-priority. Fans of escape rooms and geeky things in general will enjoy the humor, plus there's plenty of awkwardness to go around.

The light and fluffy is grounded by some very real concerns, however. Kate's father is... terrible? Her mother passed away a year prior and her father has a robot in their house that tracks everything from Kate's vital signs to her eating habits and phone use. It's creepy and Kate hates it. She's purchased a burner phone so she can have un-monitored conversations, but that only goes so far. Her father is rarely home and he's simultaneously super controlling and treating her like an adult in that he leaves her alone most of the time. Nate's worried that his family will lose their house and he's being pressured into doing worse in school so that the rich kids can do better and get into college. They offer him a LOT of money to tank his grades and then they start being truly horrible to him. (Eat the rich.)

Based on the cover copy, I was expecting much more of the story to focus on preparing for and then being in the zombie survivalist challenge. They don't start the competition until about 65% of the way in and I kept wondering when they would be on page together more, when the romance would kick off, and when they'd be chased by zombie robots. The pace really picks up once they get to the site and I'm still mulling over how I feel about the psycological obstacles they encounter along the way.

The book ends rather abruptly, and while I think they do have a Happy For Now, I was expecting a lot more time with them together, especially knowing that they're about to head off for college and have wildly different aspirations. From what I've seen, book 2 is not about this couple and while I think it's a good sign that I wanted more of Nate and Kate, I was left feeling unsatisfied at the end.

Readers who want a loving Korean-American family with lots of jokes and a realistically annoying/sweet little sister, zombies without the actual virus, and roller-skating shenanigans will enjoy this geeky, funny rom-com.

Suzanne received a digital copy of this book for review.