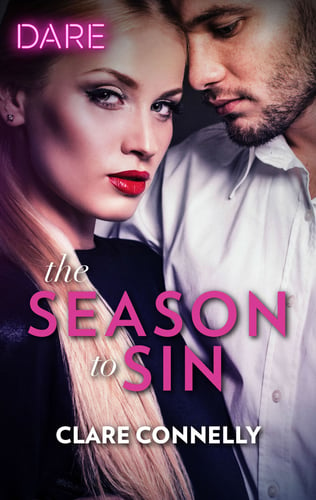 A gorgeous, damaged man comes to me for help. And I help him…right out of his clothes!

I’ve never crossed the line with a client. Never even been tempted. I didn’t spend years building a reputation as a respected psychologist just to throw it all away. Then bad-boy billionaire Noah Moore stormed into my life like a delicious disaster.

Noah is so wounded, so proud, so hot he leaves me breathless with a glance. He’s not shy about asking for what he wants—me! I shouldn’t give in, yet I do. But if I’m not careful, he’ll take everything I offer—body and soul—and walk away like it was nothing. How can I give up the control, the safety I’ve fought for, to a man who is so broken?

Noah tempts me to sin…and I’m powerless to resist. I’ve always been the good girl, always done the right thing. But this festive season, from his hip London loft to a luxurious Paris hotel, Noah is showing me how good it feels to be on the naughty list!

Review: The Season to Sin, by Clare Connelly

Since most of the Christmas romance I read is on the "fluffy" side, I decided to ramp up the angst and try out one of Harlequin's DARE line. While it wasn't overtly Christmassy, it does start shortly before Christmas one year and extend through the next Christmas. Christmas is sort of in the background, which is totally fine, but if that's not what you're looking for, perhaps not the choice for you.

So, what is the book about, if not Christmas? Well, it's about a sexy rich man who can't sleep, and the therapist who's supposed to fix him. Now, before you get squicked out, it's important to note that she never actually becomes his therapist. That's a professional line they both realize won't work once their physical attraction takes hold. So after two unofficial meetings, they start sleeping together and the idea of a therapist-patient relationship is never actualized. This would have been a dealbreaker for me, and I'm SO GLAD it was handled well.

I'm going to pause here for a content warning:
Domestic violence is discussed in this book as it's an integral part of the heroine's backstory. I mention it the review that follows.

The story is set in London, but the hero, Noah, is Australian. He grew up in the foster system, but abuse isn't part of his backstory, just a lack of unconditional love. Holly is a single mom who left a long-term abusive relationship after her ex tried to kill her while she was pregnant. He's in prison for a very long time now, so that's not an issue in this story. The ex's mother has a very good relationship with Holly's daughter, and watches her overnight on weekends.

As the story unfolds, Holly and Noah's physical relationship, which is full of enthusiastic and repeated consent, turns into something emotional. Holly eventually realizes that she can't go any further with Noah unless he addresses the issues he's trying to ignore. She asks him to see a therapist she recommends, and they agree to an unofficial "therapy" session in which she'll try to get him to realize what's really bothering him. This leads to the Big Bad Moment, as you might expect.

What comes next, however, is what saved the book for me. Noah doesn't just "grovel." Holly doesn't magically fix him. Noah puts in the work for nearly a year and they slowly reconnect, without the sex they were using as a distraction. It's quite lovely, honestly. I really appreciated that Connelly took that sort of care with mental health in this book.

All in all, it's a steamy story that doesn't fall for the traps that a lot of "edgy" romances dealing with abuse and mental health do. I'll definitely be reading more from Connelly in the future.

I received a copy of this book from the publisher via NetGalley in exchange for an honest review.