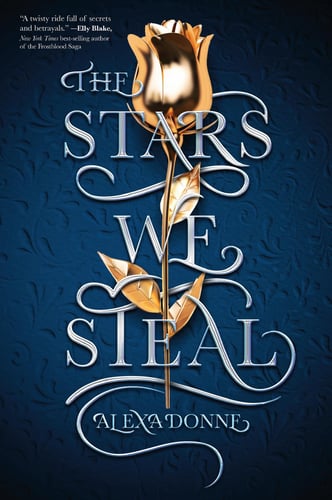 Engagement season is in the air. Eighteen-year-old Princess Leonie “Leo” Kolburg, heir to a faded European spaceship, has only one thing on her mind: which lucky bachelor can save her family from financial ruin?

But when Leo’s childhood friend and first love, Elliot, returns as the captain of a successful whiskey ship, everything changes. Elliot was the one who got away, the boy Leo’s family deemed to be unsuitable for marriage. Now he’s the biggest catch of the season and he seems determined to make Leo’s life miserable. But old habits die hard, and as Leo navigates the glittering balls of the Valg Season, she finds herself falling for her first love in a game of love, lies, and past regrets.

Fans of Katharine McGee and Kiera Cass will be dazzled by this world of lost love and royal intrigue.

Review: The Stars We Steal, by Alexa Donne

The Stars We Steal, pitched as "The Bachelorette in Space," is not-so-secretly a futuristic sci-fi retelling of Jane Austen's Persuasion. Set 40 years prior to Alexa Donne's Brightly Burning (a Jane Eyre retelling in space), TSWS stands alone but tries to cram an awful lot of plot into one book. Leonie is a Princess in a stratified society that doesn't have kingdoms but clings to notions class and privilege. Instead of countries, there are ships. Many came from individual countries or areas, so for example, the Lady Liberty is the ship from what used to be the United States (Earth is not habitable) and Leonie's breaking-down ship is a private one called the Sofi. Leonie's family has a title and a ship, but they don't have money, so her father has ordered her to enter the Valg Season to find a wealthy husband and save the family.

While docked at a larger, wealthy ship for the Season, Leonie rents out their small ship as living quarters for a group of four travelers. Little does she know, one of them is her first love, Elliot. They were engaged at 16 and forced apart by Leonie's father because he wasn't of the right class. Now he's back and has the money... but also a lot of anger.

What follows is a complex plot involving a second-chance romance, a scheming aunt and cousin, an election and lots of secrets. Leonie doesn't want to participate in this marriage game because she wants to find a way to be financially independent (and thus marry when and if she wants to), and a significant part of the plot hinges on her water filtration system, designed to improve quality of life on all ships, including those with food and resource shortages. Those shortages, of course, are only experienced by the lower classes and Leonie is part annoyingly-obtuse rich girl and part social justice advocate.

The cast is more diverse than some, with characters of color and queer characters, but some of it was clumsily done. One of Leonie's friends is a lesbian and she's often found making jokes about looking for a pretty woman to make out with. I would've liked for her characterization to be more nuanced. SPOILER: Leonie enters into an engagement of convenience with an asexual friend at one point, only to abandon him the second she realizes that Elliot still loves her.

In all, The Stars We Steal was fun but not perfect. Some of the plot twists were predictable, some were not. The aunt was a Disney Villain, but *gestures at United States.*  If I had one critique, it's that I think as a stand-alone novel, there was too much plot, especially when Donne tried to wrap it all up at the end.

If you're interested in a Persuasion retelling in  space, complete with fancy dresses, second-chance romance, Easter eggs and class differences, this will be an enjoyable read. Fans of pining and angst will find something to love here as well.

Content Warnings: murder, past: parental death, theft, smuggling, mentions of hunger and illness due to poverty