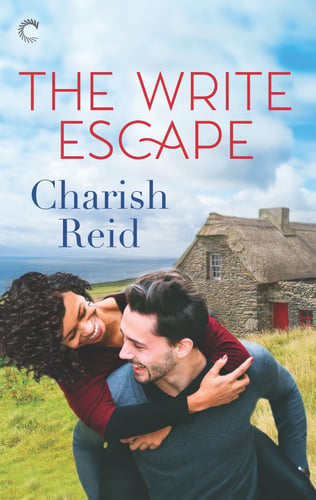 Literary editor Antonia Harper had it all—the career, the man, the future. That was then. Now Antonia is jobless, alone and at a crossroads. What better time to travel the world? A solo honeymoon on the Emerald Isle will be like hitting the reset button. No distractions, no drama.

Add some luck o’ the Irish

Aiden Byrnes may be a literature professor, but words fail him when he meets the woman staying in the cottage next door. Tully Cross is meant to be a sleepy little village, and he’s meant to be on a working holiday—not a vacation, and most definitely not with his beautiful neighbor.

And you get some mighty good craic

They say laughter is the best medicine—and as it turns out, superhot sex isn’t so bad either. Antonia and Aiden’s spark quickly grows into what could be something special, if they’re willing to take the leap. Ending up an ocean apart is unthinkable, and when real life comes calling, there’s no ignoring that leap anymore…

So, what’s a girl to do when she loses her job, her man, and a non refundable wedding cake deposit? Channel Stella, grab her half finished manuscript and head to Ireland to get her groove back, of course.

Antonia’s not looking for love when she lands on the Emerald Isle and neither is her neighbor Aiden Byrnes. Aiden’s got the brain of a literary nerd, a heart of gold, and the body of a romance novel cover model. He’s also got his own job stress, recent(ish) relationship fallout, and parental woes to deal with but one look at Antonia (and some awkward flirting over frozen pizzas) and all of that goes on the back burner.

The attraction between Antonia and Aiden is instant but they’re both wary of anything serious. They’ve both had their confidence shaken, they’re both at a bit of a career crossroads, and they’re both being haunted by the Ghost of Relationships Past (Aiden’s in the form of his absent father and Antonia’s in the form of her dirtbag ex). But living next door to each other makes it near impossible to keep their distance and the attraction between them grows with each interaction. Aiden and Antonia’s chemistry is by turns sweet and sexy and even though they’ve only known each other for a short time the pacing of the romance never comes across as rushed. There are super cute moments (I have two words: Historical Romance) and super tense moments (pro tip: Do not tell an already angry woman she’s being sensitive) between them and all of it adds a realism that gives depth to the relationship between the two. And when they finally give in to their feelings... the fire they make is hot like the surface of the sun!

Even though there were times when I wanted to smack them both, I did appreciate that neither were “perfect” and the individual issues they had get hand waved away by the power of true love. I also appreciated that Aiden was Antonia’s support and hype man, but let her handle her own business when it came to her ex and that Antonia was a source of strength and understanding for Aiden when it came to his father.

I also love how relatable Antonia was for me. Her Blackness was never shied away from and so many parts of her characterization rang true for me (from how she navigated her complicated relationship w/her mama with respect despite her exasperation, to how she used Beyoncé’s Lemonade as a weapon, to how she worried about being the *only* Black woman in the village lol) that she was a real treat to read and root for. The ending is swoon worthy and super romantic and highly satisfying. Overall, a recommended read and I’d say that Charish Reid is definitely an author to watch.

Dylan received a copy of this book from the publisher for review.