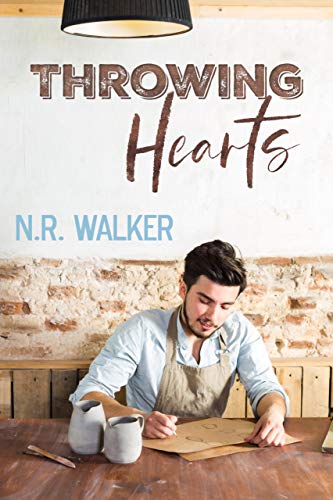 If you'd like to purchase a copy of this book, please consider using one of the following links to support the site: Amazon  (Kindle Unlimited) ◊  Barnes & Noble  ◊  Bookshop  ◊  Kobo

A fun and sexy romance where the kiln isn't the only thing that's scorching hot.

Leo Secombe loves his life, and he's convinced himself he's happy to be single. In his spare time, he keeps himself busy at a local LGBTQ centre that pairs a younger person with a community elder to help them feel included in today's rainbow family. Leo and Clyde have been buddies for a few years now, and signing up for a pottery class seems like fun.

Merrick Bowman has been so focused on getting his pottery business up and running that he's forgotten how to date. How to live, even. But when a young, bubbly Leo and an older, grumpy Clyde walk through his door, Merrick has no idea how much Leo is about to centre his world.

Throwing clay has been Merrick's entire life, but Leo's about to change all that. Maybe Merrick's ready to throw caution to the wind. And maybe he's ready to finally throw his heart on the line.

Throwing Hearts had me nostalgic for a time when we could volunteer at an old age home and strike up casual conversations at coffee shops. I laughed out loud many times, and really enjoyed that N.R. Walker makes use of allll the innuendos possible during a pottery class.

The folks from the LGBTQ centre are a mix of lovely and grumpy old people who throw out love-hate banter at all their classes. Clyde, Leo’s old-person partner and friend, is hilariously grumpy –like, people have made formal complaints about his ridiculous insults. The Clyde sub-plot reminds us about the perspective of gay men of the 80s: that they paved the way, the loss they felt, and the stigma many older people in the LGBTQIA+ community still carry with them. Clyde’s romantic interest is from the same generation, and struggles with unlearning the need to be undercover about being gay. He's also given a wonderful introduction to the world of feeling genderqueer and publicly dressing accordingly.

One of the best and most laugh-out-loud enjoyable things about this book is the extremely current dating situation. Leo has to explain to Clyde why he didn’t ask for Merrick’s number (because he needs to stalk him online first to see if he’s married and/or racist) and we obviously experience the classic, painful accidental Instagram double-tap crisis. There’s an unpacking of whether he has the rainbow flag in his bio and a panicked avoidance of actual phone calls. The Instagram ‘like’ situation escalated so amazingly and almost too realistically! I was sitting on the couch listening and felt like I was sitting on the couch right next to Leo and his best friend. Their adorable friendship also had me missing casual late-night hangouts over-analysing crushes with friends. Sidenote: Leo’s voice sounds a lot like Troye’s Sivan, incase that’s something you’re into.

Throwing Hearts is everything N.R. Walker's books always are: Adorable, warm, charming and fun, with interesting characters who are undeniably and openly into each other, which results in memorable dates and sweet, intimate affection. 10/10 recommend!

***
If you'd like to purchase a copy of this book, please consider using one of the following links to support the site: Amazon  (Kindle Unlimited) ◊  Barnes & Noble  ◊  Bookshop  ◊  Kobo
***
Andrea purchased this audiobook.

Content Warnings: There’s some casual meanness and judgement of men who use Grindr and hook-up at gay clubs. Grief and mention of Clyde’s boyfriend who died in the 80s along with most of his friends.