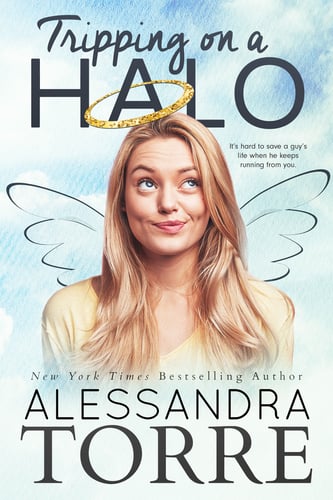 It’s really hard to save a guy’s life when he keeps running from you.
You might be asking yourself why I’m waving an inflatable penis in the air and screaming at the top of my lungs. If I took time to explain, Declan Moss would get hit by a bus.
Let me back up. I didn’t ask for this. I was perfectly happy—and perfectly sane—before I was tasked with keeping Declan Moss alive. It was a thankless job until the moment that my panties dropped and his delicious smirk found his way in between my thighs.
Hello, toe-curling ecstasy. Goodbye, professional boundaries. And suddenly, there’s a new danger to avoid: the falling of my heart.

Review: Tripping on a Halo, by Alessandra Torre

This is a difficult book to review, because I had two completely different trains of thought going while I was reading. On one hand, it's an over-the-top romantic comedy, with a heroine doing some truly batty things that sound straight out of The CW's Crazy Ex-Girlfriend. On the other hand, the book doesn't deal well with mental illness, the reality of stalking, and/or actually building the romance between the two main characters.

Autumn's mother dies before the book starts, leaving her and her sister each a trust that they can access after a year as long as they are of sound mind. (She meets with a psychologist every couple of weeks to check in while she waits.) Eventually, we learn that her mother had some serious mental health issues, things that I think would have resulted in the removal of her children from her care had her daughters not covered for her. Because of this, Autumn and her sister have a very close relationship, but Autumn also has this "at least I'm not as bad as mom" track running through her head as she engages in some truly questionable behavior.

Scratch that. ILLEGAL behavior. Autumn inadvertently delays fancy-pants Declan when a plane crashes in his (and her sister's) neighborhood. She takes this as a sign from God that she's his guardian angel, and sets out to keep him safe. This means everything from following him to work and trying to get to his office every day to asking her sister for updates on when he gets home at night. She goes through his trash. She has coffee across the street from his workplace even though it's nowhere near where she lives. She is full-on stalking him. But it's all funny because she thinks she's his guardian angel... I had such a hard time reading this. It's like if all of the stuff Rebecca does in Crazy Ex-Girlfriend was just passed off as cute and never addressed as being the result of her mental illness. This unsafe and irrational behavior, combined with her mother's mental illness should have been a tipoff to her therapist, who instead says "oh, she's dealing with her mother's death by trying to make this other guy safe, it's harmless." I have a very hard time believing that a psychologist would actually say/think that.

Add to this the number of times Autumn is referred to as crazy. Loony. Unstable. I cringed every time. The hero refers to her as crazy over and over, but insists that she's "harmless." (What if the genders were reversed?)

Eventually, Declan and Autumn talk and Declan realizes she's not stalking him so much as "guarding" him. Then it's all okay and they enjoy some carefree dates and sexytimes before something happens that needs to go behind a spoiler tag.

The end result was a book that went from creepy to insta-love to huh? It was all a bit of a mess and not what I was hoping for. Then again, the blurb itself sounds absurd, so maybe I got what I was asking for.

SPOILERS BEYOND THIS POINT

HERE ARE THE SPOILERS, LOOK AWAY

Autumn has headaches, which she thinks mean that she needs to get to Declan immediately to save his life. Bad headache = grave danger! Eventually, she's having stroke-like symptoms and Declan (conveniently an EMT in his off-hours) calls an ambulance. She has a cyst or something on her brain, and the only solution is emergency surgery. She ends up in a coma for months. During this time, he "falls in love with her." This was the part that made my rating for this book end at 2 stars.

Between the stalking, the fact that her personality was being affected by both grief and brain issues, and the months-long coma... who is he falling in love with? And she can't respond to him... so how? She does recall some of what he says while she's in the coma, but it's a one-sided conversation. I don't know if I believe that a man who'd thought this woman totally insane until a week prior to her collapse would stick with her for months and profess his undying love while she lay there, unresponsive.

Aaaaanyway, I strongly disliked the mental illness rep in this book and it was too far on the side of "she's crazy!" to be fun for me.