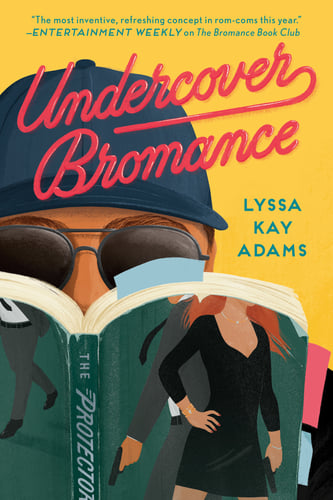 Braden Mack thinks reading romance novels makes him an expert in love, but he’ll soon discover that real life is better than fiction.
Liv Papandreas has a dream job as a sous chef at Nashville’s hottest restaurant. Too bad the celebrity chef owner is less than charming behind kitchen doors. After she catches him harassing a young hostess, she confronts him and gets fired. Liv vows revenge, but she’ll need assistance to take on the powerful chef.

Unfortunately, that means turning to Braden Mack. When Liv’s blackballed from the restaurant scene, the charismatic nightclub entrepreneur offers to help expose her ex-boss, but she is suspicious of his motives. He’ll need to call in reinforcements: the Bromance Book Club.

Inspired by the romantic suspense novel they’re reading, the book club assists Liv in setting up a sting operation to take down the chef. But they’re just as eager to help Mack figure out the way to Liv’s heart. . .even though she’s determined to squelch the sparks between them before she gets burned.

In Undercover Bromance, Lyssa Kay Adams attempts to lighten the intensity of a sexual assault plot with male camaraderie and jokes. It's not entirely successful. The book itself is not entirely successful and I admit to being greatly disappointed. This is a complicated review since my feelings are messy, but I tried to keep spoilers to the end. However, there are a few from the first 20% of the book that I've included because I don't believe setup to be spoilers.

The book opens with Braden Mack talking to the guys in the book club about his upcoming date and how he's going to ask the woman he's been dating for three months to be his girlfriend. He takes her to an extremely posh restaurant and has ordered the $1,000 cupcake. I immediately hated him. So did Liv. Anyway, the cupcake gets dropped and Liv's asshole boss tells her to meet him in his office in 20 minutes. Presumably to scream at her and then fire her. When she shows up, her boss has the very young hostess (Jessica) in his office and is telling her that she has to perform oral sex on him to keep her job. She repeatedly says she doesn't want to and he persists. Then he forcibly kisses Jessica and when Liv opens the door and yells, she sees that Royce Preston's penis is out of his pants.

Here's my first issue with the book: the blurb and the book repeatedly call this harassment. This is assault. It is made clear later on in the book that he has not only harassed many many women at his restaurant but actively assaulted them. If you want to discuss consent and power in the workplace... fine. But this here specifically is not consent. She doesn't want to be kissed and is actively telling him no. And his genitals are out. Stop equating this with lewd comments. Jessica is experiencing all of that plus assault. Here's RAINN's definition. If you don't believe this is assault, I think we can all at least agree that it's a prelude to assault. (Coerced oral sex without consent.)

Okay, moving on. Liv is fired and tries to take control of Jessica's life by getting her a new job and telling her they have to take down Preston because he'll do this to other women. Throughout the book, Liv acts without involvement from Jess, pressuring her to speak up and judging the hell out of her. This is obviously intentional, as part of Liv's character arc is learning that standing up for women requires a less judgmental approach and their actual participation/consent. My second big issue was that Liv and then Mack end up telling at least a dozen people about the assault and specifically give her name. She did not consent to this. They also don't get the police involved (Jess doesn't want to file charges) nor do they attempt to get Jess connected with a therapist or trauma specialist. There is in fact no mention (maybe I missed it) of therapy and recovery for the victims. Just revenge/justice.

I'll talk a little more about why this plot didn't work for me in a spoiler down below, but for now I'll just say that Adams was clearly on a mission in this book. She wanted to discuss the ways in which victims decide to speak out, why they might not, and how judgmental other women can be. She got a lot of it right. Leaps and bounds beyond some books I've read in the past. But if we as a genre are going to publish this many books about this topic, is that a good bar? Is trying really hard and getting close good enough? Maybe. I expect a lot of readers will really enjoy this book and pump their fists in triumph at the end. And that's fine. It just didn't hit me that way.

Issue number three for me was that it's Braden Mack, our knight on a white horse, who tells Liv over and over how wrong she's being... because he's read romance novels. There are even handy lists of facts coming out of his mouth. From a craft perspective, it's awkward and not smoothly done.

The fact that they set out to expose Preston while reading a romantic suspense novel was... not great. It's turned into a cross between caper and mission for justice and wrapped up in a bow that I assume was meant to be tidy but ended up leaving a sour taste in my mouth.

I admit that if I hadn't read so many damn books with assault and trauma in them in the last two years thanks, I assume, to the media coverage of "the #MeToo movement," I would probably not be judging this one so harshly. But I have. And it's started to feel exploitative. Are publishers donating the proceeds off these novels to shelters and other organizations helping victims? One can make an argument that the nonfiction being published (Catch and Kill) is serving an educational need, but this sort of book feels like a processing of collective fear and anger on the part of authors and readers and is not always respectful of victims.

As I said, Adams is very clearly trying in this book. She's got a LOT of it right. Everyone calls Liv on her bullshit over and over until she gets it. But there's the stuff I mentioned above that isn't dealt with.

Lyssa Kay Adams continues to exhibit skill at banter and humor. It was a bit jarring at times given the heavy nature of the other subject matter, but I was reminded of the things I loved about the first book in this series.

Mack is an okay guy, even if he's a rich idiot. I liked the two of them together and how he ended up falling for Liv not despite her bristles but because of them.

Adams' writing voice is the only reason I kept reading. I had a gross feeling in my stomach by about 20% and considered stopping, but then she got the two characters together and an asshole rooster attacked Mack and I was lured back in. Side Note: in a book about sexual assault, jokes about a rooster assaulting his flock of hens was... tactless. Roosters are truly horrible, but that bit could have been left out.

Unfortunately, due to my experience reading this book and the fact that the heroine of the next book was one of Preston's victims and the hero is a super-hacker guy that Mack hires to both find Jessica's private contact information and dig up dirt on a bunch of women who didn't want to be found, I won't be reading the next one.

First, Mack's Big Secret is that he's the son of a man in prison for murder. That man also repeatedly abused Mack's mother, brother, and himself. Mack says at one point that a man shouldn't need to know a victim personally to be angry about abuse, but I couldn't help but feel that part of Mack's intense feelings about abuse/assault are a direct result of the fact that his mother was victimized as well.

Second, the book ends with Preston's exposure at a big event. A bunch of women whom he's been paying off for years stand up on chairs and yell about it. Reporters have been alerted, etc. As we all know, victims who come forward are in no way dragged through the media mud afterward... Since no one got the police or reporters involved (that would take too much time!) they don't have the benefit of being anonymous. And they've been taking hush money from Preston for years, so I'm sure they'll be pilloried in the public eye. But this is our big moment of justice. Again, the reader feels a sense of relief and triumph, but the victims will have to deal with it afterward.

Finally, the heroine of the next book is a friend of Liv's and one of Preston's victims. Liv and Alexis have a confrontation AND ALEXIS VOMITS WHILE TALKING ABOUT IT. She's clearly not recovered and again, no discussion of counseling. I sincerely hope that's covered in the next book. Alexis shouldn't have had to go through that for the sake of Liv's character growth.