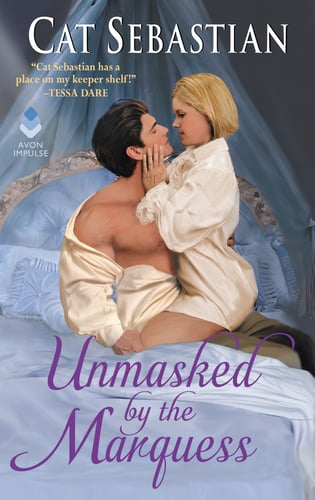 The one you love…

Robert Selby is determined to see his sister make an advantageous match. But he has two problems: the Selbys have no connections or money and Robert is really a housemaid named Charity Church. She’s enjoyed every minute of her masquerade over the past six years, but she knows her pretense is nearing an end. Charity needs to see her beloved friend married well and then Robert Selby will disappear…forever.

May not be who you think…

Alistair, Marquess of Pembroke, has spent years repairing the estate ruined by his wastrel father, and nothing is more important than protecting his fortune and name. He shouldn’t be so beguiled by the charming young man who shows up on his doorstep asking for favors. And he certainly shouldn’t be thinking of all the disreputable things he’d like to do to the impertinent scamp.

But is who you need…

When Charity’s true nature is revealed, Alistair knows he can’t marry a scandalous woman in breeches, and Charity isn’t about to lace herself into a corset and play a respectable miss. Can these stubborn souls learn to sacrifice what they’ve always wanted for a love that is more than they could have imagined?

Review: Unmasked by the Marquess, by Cat Sebastian

Cat Sebastian recently gave an interview on The Muse talking about LGBTQ characters in historical romance. Not surprising, it was glorious. Sebastian has become one of the biggest names in historical romance by not sticking to its tropes. She ties together all of the things we love about historicals (Class! Outfits! Balls! Drama!) and adds her own element - m\m romances. So imagine my surprise when I pick up UNMASKED BY THE MARQUESS and see a woman on the cover. Was she switching it up? Was this an m/f romance?

Alistair is the Marquess of Pembroke, and he’s finally gotten his family name out of the red. When his father passed, he left debt, mistresses, and a couple of illegitimate children which became Alistair’s responsibility. But the family name is on the up and up and Alistair’s bank account never looked better. That is until Robert Selby appears. His sister Louisa was Alistair’s father’s goddaughter, and she requires money and recognition to have her first season in London. Though Louisa is a real beauty, Alistair is drawn to Robert instead.

But Robert is Charity, the former housemaid to the Selby family. Charity has been posing as Robert since he declined to go to Cambridge and she went in his stead. After Robert’s passing the family agreed to keep the deception going. Now Charity feels more like Robert - and isn’t willing to give it up for anyone. As the attraction grows between Alistair and Robert, Robert must start making choices. Will their darkest secret ruin Louisa’s chances of a good match?

I usually do not read historicals. Though I love the drama that some Regency can offer, I find the gender politics, casual racism, and classism of lousy Regency to aggravate me. An unusual and progressive historical needs to come around for me to notice - and UNMASKED BY THE MARQUESS is this type of romance. Sebastian writes a well-rounded gender-neutral character who will satisfy your need for a rake. I had a small fear that Robert would have to give up their identity to be with Alistair but (without spoilers) she never allows this to happen. Robert (or Robin as Alistair starts calling them) is unwilling to compromise for love. And that’s so refreshing! Throughout the book, Robert/Charity/Robin never even considers conforming to a female identity to be with Alistair formally. And Alistair isn’t bothered by it either.

Alistair’s conundrum in all of this is facing society. Despite his feelings for Robert, he cares what others think. Alistair has bedded men and women in the past, but it's all been hush. He wants the title and the land and the good name that comes with it all. He has spent most of his adult life searching for that recognition away from his father's past and avoiding possible scandal. Though we as a modern society may not understand these tight social constraints of the Regency era, we can certainly understand the desire to be more than our father or our father’s father. Alistair’s stubbornness comes from fear, and who can’t relate to that?

My one small issue with UNMASKED was that Sebastian didn’t use a gender-neutral pronoun for Robert. In her afterword, she states that she thinks Charity/Robert wouldn’t have minded switching from he/him and she/her. I think some readers would have liked to see representation through pronouns in the text. I am happy that Sebastian acknowledged her choice and her character’s wishes in the afterword, and also briefly touched on trans and gender-neutral people in history. But as a reader seeing they/them in a commercial romance novel would be huge for me (and for others too!).

I’m very excited to see how Sebastian’s Regency Imposters series grows. UNMASKED BY THE MARQUESS is an excellent start to this new chapter in her writing stories that aren’t strictly m/m but are still delightfully queer. The secrets will keep you guessing, and the love story and of course hot sex will keep you wanting more.