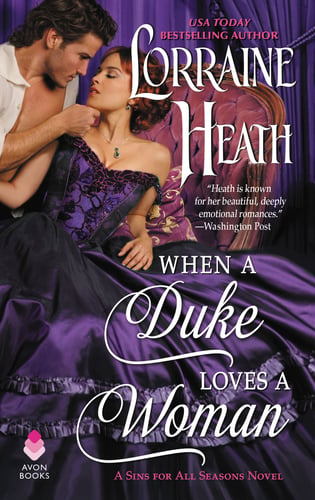 Gillie Trewlove knows what a stranger’s kindness can mean, having been abandoned on a doorstep as a baby and raised by the woman who found her there. So, when suddenly faced with a soul in need at her door—or the alleyway by her tavern—Gillie doesn’t hesitate. But he’s no infant. He’s a grievously injured, distractingly handsome gentleman who doesn’t belong in Whitechapel, much less recuperating in Gillie’s bed . . .

Being left at the altar is humiliating; being rescued from thugs by a woman—albeit a brave and beautiful one—is the pièce de résistance to the Duke of Thornley’s extraordinarily bad day. After nursing him back from the brink, Gillie agrees to help him comb London’s darker corners for his wayward bride. But every moment together is edged with desire and has Thorne rethinking his choice of wife. Yet Gillie knows the aristocracy would never accept a duchess born in sin. Thorne, however, is determined to prove to her that no obstacle is insurmountable when a duke loves a woman.

[This is second in the Sins of All Seasons series.]

Review: When a Duke Loves a Woman, by Lorraine Heath

As I mentioned in my mini-review of the first book in this series, Beyond Scandal and Desire, Lorraine Heath writes emotional, soapy historical romances with plots that can be over-the-top at times. This means that the author's entire body of work is hit or miss for me, but this one was a hit.

The series follows a group of children left with a widow as infants. They're referred to repeatedly as bastards, which is as much an insult back then as it is now. It's also repeatedly noted that the laws of the time punish children born out of wedlock, as though it's the children who are responsible and not their parents. The first book pairs Mick Trewlove with an aristocratic woman who is engaged to his (legitimate) brother. This second follows one of Mick's adoptive sisters, Gillie and, you guessed it, a duke.

The Widow Trewlove dressed Gillie as a boy for years in order to keep her safer as she worked as a step cleaner and did other menial tasks around London. Between this and Gillie's tall stature, she's never thought of herself as particularly appealing to men and hasn't sought them out for fear of rejection. Instead, she focuses on herself and making sure that she's never in the situation to produce babies like herself - unwanted and unattended. Mick gives her the seed money to buy a tavern (the whimsically named Mermaid and Unicorn) and she runs it with skill and grace.

We meet the hero, Thorn (the Duke of Thornley) when he's set upon by a group of thugs out to rob him. He gives them everything but a pocketwatch, the only thing he has left of his father, who died of syphilis when Thorn was a young teen (due to being a philandering ass). So Thorn gets the snot beaten out of him and is nearly dead before Gillie rescues him and nurses him back to health.

As it turns out, Thorn was in that part of town because he was looking for his wayward fiancee, who left him at the altar. He wasn't in love with her, but he does want to make sure she's safe and, since he has now learned firsthand just how dangerous this part of town is, he wants to find her and tell her she can get out of the engagement as long as she comes home. To that end, he enlists Gillie to help him with the locals - find information, follow leads, that sort of thing.

And, of course, you know what happens next.

This is a romance full of pining and angst. Both Gillie and Thorn are responsible people who want to treat the others in their lives with respect and care, so it's particularly tricky for them to want so badly to be with a person they know can't be part of their respective world. Heath writes Thorn as a man who is impressed with Gillie's business acumen and her compassionate heart, without somehow exoticizing Gillie. Gillie falls for Thorn very much against her intentions, but she's never ashamed of her romantic feelings or her physical desires. It's a very fine line and Heath draws it well.

I won't tell you how the conflict is resolved, but I will say that I was guessing up until the very end, because both Gillie and Thorn were determined to "do the right thing." Their relationship felt deeper and somehow more based on friendship than a lot of historical romances I've read, and it reminded me of why I keep reading Heath's books when they're so hit or miss for me.