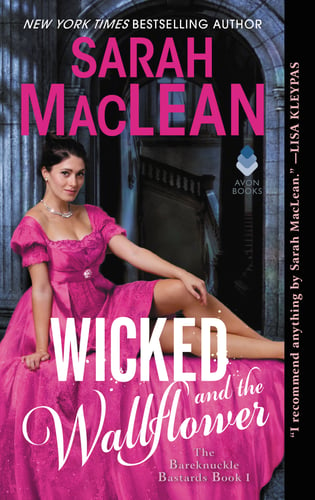 When Wicked Comes Calling . . .
When a mysterious stranger finds his way into her bedchamber and offers his help in landing a husband, Lady Felicity Faircloth agrees to his suspicious terms--on one condition. She's seen enough of the world to believe in passion, and won't accept a marriage without it.
The Wallflower Makes a Dangerous Bargain . . .
Bastard son of a duke and king of London's dark streets, Devil has spent a lifetime wielding power and seizing opportunity, and the spinster wallflower is everything he needs to exact a revenge years in the making. All he must do is turn the plain little mouse into an irresistible temptress, set his trap, and destroy his enemy.
For the Promise of Passion . . .
But there's nothing plain about Felicity Faircloth, who quickly decides she'd rather have Devil than another. Soon, Devil's carefully laid plans are in chaos and he must choose between everything he's ever wanted . . . and the only thing he's ever desired.

Review: Wicked and the Wallflower, by Sarah Maclean

As a reader who struggled a bit with Maclean's last series, I'm so happy to say that I think Wicked and the Wallflower is something of a return to form for Sarah Maclean. As I said to a friend, the heroine gives me the same feelings as Callie from 9 Rules to Break When Romancing a Rake, with the dangerous underworld feels of her series that takes place at a gambling hell.

Yet for all that, the book also feels like a departure of a sort. The hero, Devil, is a "Bareknuckle Bastard," but he's totally gone for the heroine, Felicity. While we might have loved Bourne despite his being an utter ass, Devil mostly isn't (more on that in a minute). And, I'll be honest, after Maclean's last hero, I was hesitant. I read romance for the heroines and there's only so much asshattery I can tolerate from the men. By the end of The Day of the Duchess, I was happy because I wanted Sera to be happy, not because I cared one whit for Haven. Anyway, this is not that sort of situation. The hero is actually a good guy.

The book starts off a bit awkwardly, like many first-in-series novels do. With a few flashbacks, Maclean tells us about four babies, born the same day to four different women. Three of them are bastard boys, all born to the same father, the Duke of Marwick. The fourth is a girl, born to the Duchess... but not the Duke. The Duke is left without a legitimate heir and, when the boys are ten, brings them all to his estate to compete for the title. It's as awful as it sounds. (See bottom of review for content warnings.) There's animosity between the Bareknuckle Bastards and their half-brother, who betrayed them and claimed the title, and who happens to be in love with the "sister." Devil and Beast (Devon and Whit) have been hiding Grace (Dahlia) for 12 years, and now Ewan (the new Duke) has found a way to draw them out - he's going to get married. The Bastards told him there would be no heirs to the dukedom, and that they'll do whatever is necessary to prevent them.

Enter Felicity Faircloth, whom you might recognize from The Day of the Duchess as one of the young women competing for Haven's hand. She's 27, shunned by her former friends, and being forced to marry to save her family from financial ruin. In a moment of pique, she announces that she's already landed the Duke. The Duke, finding this very convenient, decides not to deny it. Since she doesn't know that yet, Devil tells Felicity that he can convince the Duke not to deny it. And so we end up with a novel that's about Devil and Felicity falling in love while he pretends to secure her a marriage that no one wants.

There's a lot of interesting worldbuilding with smuggling, lockpicking, and discussion of the poor/dangerous parts of London, like Covent Garden, where Devil lives. Sure, he now "runs" Covent Garden, but he genuinely cares about his people, giving them jobs and some semblance of security. I appreciated that Maclean didn't just pluck a hero out of poverty to give him a seedy backstory, she engaged with it and gave faces to the forgotten.

Devil is an all-around good man... except for the lying. I'm never a fan of the idea that a man who has been lying to a woman for 80% of the book is now compelled to stay away from her for her own good. I mean, yes? Obviously you're not good enough for her if you've been lying to her the entire time she's known you, but isn't there ever a point when you stop and let her make her own informed choices? Anyway, if lying or that macho "I can't pull you into my darkness" stuff is going to ruin the book for you, consider this your warning. I was cheering for Felicity to lockpick her way into his heart and totally ruin him, so I was glad when she did. *shrugs in hypocritical manner*

Felicity is never described as traditionally beautiful. She's got dimples on her "round belly." She's repeatedly described as "plain." I'm mentioning this not because I want her to be beautiful, but because it's important that readers remember that she's explicitly not. Average looking women deserve the kind of love that doesn't care about belly dimples, the kind of love that takes a "flaw," like Felicity's curious nature, and desires her because of it. I know we all have a tendency to mentally cast our heroines as beautiful, in part because we believe them to be so, but I liked that Maclean kept subtly drawing my attention back to Felicity's imperfections... and then having Devil fall on his face with adoration.

The story is full of suspend-your-disbelief plot elements that ride atop a deep emotional current that pulls you under. I could see the black moment coming, but I was anxious until the finish, wondering just how everything would work out. That's the magic of reading a good romance, isn't it? Knowing that the characters will find a Happily Ever After, but not knowing how they can possibly achieve it until the end.

Content Warnings: Hero lies to heroine, mentions of child abuse (no pedophilia), sort of a step-sibling plot possibly coming in book three. I didn't read them as step-siblings since they were only living together for two years of torment and shared no parentage (blood or otherwise), but there's your warning.