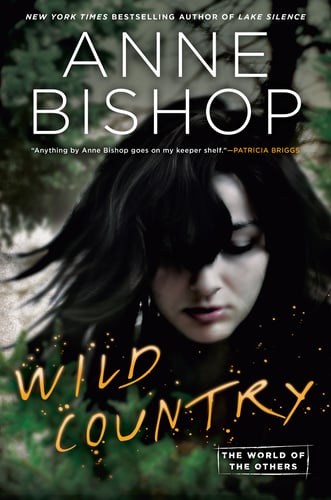 The first series of Anne Bishop’s The Others ended two years ago with Etched in Bone. Since then Bishop has written two additional books in that world for her World of the Others series. In this spin off series Bishop revisits familiar themes, while expanding the world, by introducing new types of characters and introducing new perspectives. The first book in that series was Lake Silence. It took place in an Others controlled human settlement, and it takes place a little bit after Etched in Bone. That book followed new but familiar characters and could be read as a standalone, as it only lightly references prior books.

Wild Country, however, takes things a completely different direction. As a long-time fan of the Others series, I couldn’t put it down, but it suffers from and magnifies a lot of the problematic issues from the original series - chiefly, sexualized violence against women - this time, extending beyond the exploitation of the cassandra sangue. A large of percentage of the women in this book experience some sort of violence or sexual harassment at some point in the novel and one character suffers a gratuitously explicitly violent death.

Wild Country is set in Bennett, a town massacred by the Others in response to the brutal slaughter of the dominant Wolfguard pack in the area by Humans supremacists. It takes places concurrently with Etched in Bone, heavily referencing that storyline and events in that book through the eyes of new characters, and introducing new complications and threats to the coexistence of humans and Others in Thasia. About half the cast is made up by characters previously introduced in The Others series, like Barb Debany & Tolya Sanguinati, and the residents of Prairie Gold, like Tobias and Jesse Walker.

“There was no mercy in the wild country, no safety in the dark” (Anne Bishop, Wild Country, Chp. 13).

Wild Country deals deeply with a group of people struggling to re-establish trust and negotiate new new societal norms after brutal events. Bishop explores how the survivors of the original attacks and the new arrivals experience the trauma of Bennett, through eyes of two new main characters, Jana Paniccia, a rookie Human police officer and Sheriff Virgil Wolfguard, one the surviving Wolves, who she is sent to assist in policing the growing re-populated town. It is one of the strengths of the novel how deeply this theme is explored. I loved how so many of the relationships were impacted by the trauma, and how much unpacking the characters had to do in order to understand the reactions of other people, Human and Others, to seemingly trivial things. Bishop was less deft at addressing the issues of excessive force and police brutality, and if parallels are meant to be drawn to our contemporary discussions, I am not at all comfortable with it’s seeming endorsement.

Bishop is more successful in how she works in a lot of tropes from Westerns into the plot, from the use of the saloon as the setting of many tense confrontations, to the card sharks and con-men targeting the town, to the showdown in the middle of town. It was sometimes fun and sometimes frightening to see Virgil assuming the persona of the Sheriff from the same kind of westerns he has taken to reading.

I also really love how Bishop has complicated who the Intuits are. In the original series they are almost exclusively portrayed positively. They are friends and allies of the others, often living in model communities. In Lake Silence and in Wild Country, that narrative is complicated by presenting Intuits who have chosen to leave those communities and in this one the dark side of the Intuit's knowings are explored. It helped me better understand how the situation with the cassandra sangue could have developed the way it did.

In addition to following the storyline of a western, Wild Country has the most traditional romantic arc I’ve seen from Bishop in this series. It was so straightforward and sweet that at point I worried were being set up for a bait and switch, but mercifully a HFN/HEA is achieved. Also quite surprisingly this book has great on-the-page sex between an unexpected couple and no one dies afterwards.

Wild Country is full of surprises and unexpected twists, most more unsettling and upsetting than the last while providing a heart-pounding companion story to Etched in Bone. It is not a book I would recommend to anyone except a long-time series fan however.