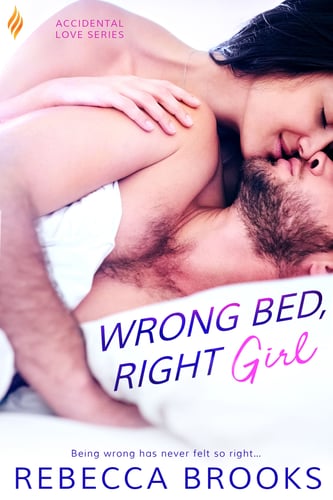 Though they're in the same series, Wrong Bed, Right Girl is totally different from Wrong Bed, Right Roommate. The heroine in this one, Talia, is the sister of the hero in WBRR, and she's just moved out of the apartment to let her brother and best friend have their own space. Unfortunately, the prima ballerina she's subletting from was an informant for the DEA and she's left town and the ballet for *reasons.* Talia's pretty much taken over her life, which means that when Reed comes to check on Stacey, he ends up literally falling into the bed that's now Talia's.

Unlike the first book, I had to suspend a lot of disbelief for this setup. A strange, giant man falls into my bed (he unlocked the door?!) in the middle of my first night in a new apartment? Yeah, I'm freaking out and DEFINITELY not going home with him. Even if he shows me his badge. (Oh and the hero manages to ogle her accidentally-exposed breast during her reasonable freakout.) I stuck with it because I loved the first book so much, so bear with me here.

One of the reasons I don't read a lot of romantic suspense is because I often feel the suspense part overshadows the romance. This wasn't the case here, since the crime bits are at the beginning and the end, but I still wasn't feeling the emotional connection between the two main characters. They definitely seemed turned on by each other, but the romance bit was sort of forced. The epilogue was the most romance-y part of the book, so I get the feeling the author/editor knew it needed something more to secure that HEA.

TL;DR - This is a very sexy book with some things you may have to ignore and is higher in heat and lower in feels.

I received a copy of this book from the publisher for review via NetGalley.

Content Warnings: hero breaks into heroine's apartment (but he has a key), crime, prescription drug misuse, situation of possible peril, handcuffs, grief for past parental death