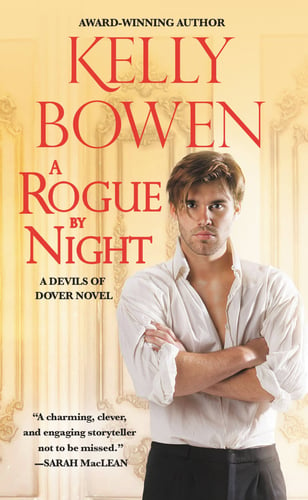 Review: A Rogue by Night, by Kelly Bowen

The third book in Kelly Bowen's Devils of Dover series pairs two doctors who both happen to be smugglers as well. Katherine is the daughter of a smuggler and was brought up in the family business. She studied under a midwife and then went to war, and has since been patching up the locals. Harland is a Baron and also a doctor, something his late wife hated him for. Since they both have a disastrous past relationship and are trying to keep secrets (very poorly), their relationship progresses in fits and starts.

Unlike the other books I've read by this author, A Rogue by Night is full of action. It reads a bit like a Joanna Bourne novel, honestly. There are lots of soldiers shooting at people, a prison break, and a whole bunch of doctoring. Since the main characters are both doctors, this makes a lot of sense, but I do think the non-stop action interfered a bit with the development of their relationship. Harland is immediately smitten, while Katherine aims a rifle at him during their meet-cute.

It takes a bit, but once they both open their hearts, the romance is charming.  Their connection is built not just on physical attraction, but also on mutual respect and an appreciation of each other's professional competence, so I thought Bowen managed the class and power imbalance well. Overall not my favorite of Bowen's books- this is a high bar -  but still a solid, engaging story.

Content Warnings: everyone gets shot, amputation, discussion of war and horrible prison conditions

Side note: I got a finished copy and I'm not sure if it's because I was reading on paper instead of on my Kindle, but there were a few noticeable copyediting errors.