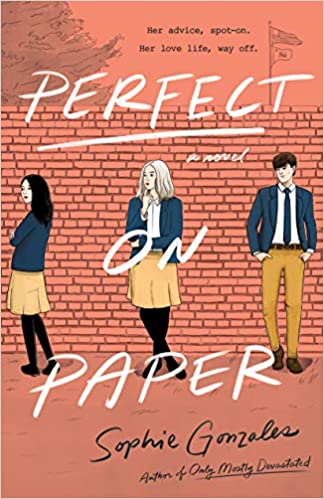 In Sophie Gonzales' Perfect on Paper, Leah on the Offbeat meets To All the Boys I've Loved Before: a bisexual girl who gives anonymous love advice to her classmates is hired by the hot guy to help him get his ex back

Her advice, spot on. Her love life, way off.

Darcy Phillips:
• Can give you the solution to any of your relationship woes―for a fee.
• Uses her power for good. Most of the time.
• Really cannot stand Alexander Brougham.
• Has maybe not the best judgement when it comes to her best friend, Brooke…who is in love with someone else.
• Does not appreciate being blackmailed.

However, when Brougham catches her in the act of collecting letters from locker 89―out of which she’s been running her questionably legal, anonymous relationship advice service―that’s exactly what happens. In exchange for keeping her secret, Darcy begrudgingly agrees to become his personal dating coach―at a generous hourly rate, at least. The goal? To help him win his ex-girlfriend back.

Darcy has a good reason to keep her identity secret. If word gets out that she’s behind the locker, some things she's not proud of will come to light, and there’s a good chance Brooke will never speak to her again.

Okay, so all she has to do is help an entitled, bratty, (annoyingly hot) guy win over a girl who’s already fallen for him once? What could go wrong?

Review of Perfect on Paper