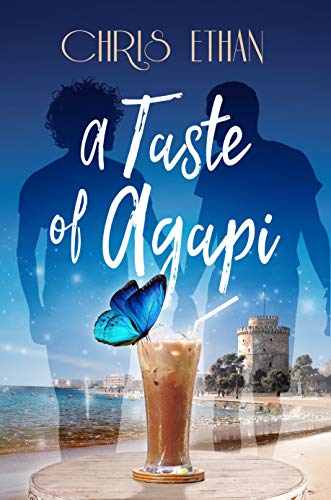 Review: A Taste of Agapi, by Chris Ethan

A Taste of Agapi is a gay romance between two college students in Greece. Reading it felt like going on a summer abroad. It's a story filled with sweetness: Really wonderful, supportive friends! Comic book stores and superhero debates! So! Much! Coffee! (The Greeks all drink frappes all day every day, and hardly ever go to class. They spend alottt of time lounging around in cafes drinking coffee and smoking cigarettes.) Really adorable welcoming-at-the-airport-Arrivals-gate scenes. Wonderful, loving, accepting responses to someone coming out (and no negative responses). Tent sex! (First time naked with another man, first time having sex at all tent sex!) Tired boys who haven't been sleeping finally getting rest together, and the sexual tension that ensues. There's also drinking games, drunken nights at a club, spin-the-bottle on a camping trip, and sooo much delicious Greek food!
Ren comes to Thessaloniki on a study abroad program. Ren is British, gay, and out at home. Jimmy is Ren's university-assigned friend and guide around the city. He is Greek, gay, and not out to anyone. Arriving in Greece brings Ren into a friendship group that feels perfect for him. It also brings him to be bullied by some locals in his apartment building and classroom. Apparently there's a deep hate for British people in Greece, and a nationwide homophobic view of British men, which results in Ren being bullied using xenophobic language and homophobic slurs right from the start. Jimmy immediately stands up against the bullies and anyone not being fair to Ren, encouraging Ren to call for help and report the issues. In between showing him the Greek way of life, Jimmy gets Ren out of the difficult and potentially dangerous situations he's landed in. Jimmy also spends the majority of the book caught between his own adorable tender blooming feelings for Ren, and his internal dialogue of shame and fear of being caught. "He wanted to go back and hug Ren. Protect him from the world, his world, the one he knew so well but to which Ren was a stranger. To hold his miniature arms and brush his wild hair until Ren settled and became happy. Jimmy blinked, watching the world zoom past outside the car window. He couldn't possibly like Ren, could he? The butterfly in his stomach fluttered its wings a couple of times, but Jimmy ignored it. Ren was just a nice guy. That was it."
This cover is a PERFECT encapsulation of the book! The frappes are pretty much a character in the story, and a symbol of the laidback Greek lifestyle. The butterflies represent the affection and attraction that Jimmy could no longer hide, and no longer wanted to. For the first half of the book, Jimmy keeps feeling butterflies spread their wings and flap around in his stomach. They're a metaphor for his long dormant acceptance of his sexuality and that he'd been resigned to hiding it forever. Ren awakens something within him --the butterflies, and a blooming feeling of possibility.
The book is also pretty low on heat. I'd say it's like a PG16 movie. We get two drunken kisses, one quick, shameful masturbation and a blowjob/frottage scene in a tent. But there is imagining and wishing to kiss him and hold him and staring longingly throughout! It may be important to you that their first two kisses happen when they're both drunk. There is some angst. First, when they've kissed but never talk about it, and later after a public kiss, when Jimmy shuts down and rejects Ren --but it's a short book so it doesn't last long.
There were a few weird moments: Ren is strangely critical of the Greek people's accents when speaking English, which felt petty and condescending and is also weird because he's not a teacher or anything, he's just judging them for no reason.. and there's a VERY unnecessary paragraph where Ren's aunt Daisy is asked why she designs men's clothes specifically, and goes on a wild rant about how all women do is complain about being too fat or too skinny or go on about diets. It includes some really rude comments that I don't understand why that page even had to be there.
Though the book deals with some heavy topics, the characters have so much sweetness and genuine love between friends that it somehow didn't feel dark. I really hope there's gonna be a companion book, it would work so well to have a follow-up story about where the two end up and how they continue to bloom.
Content Warnings: Bi-erasure (One 'he's had girlfriends, he's not gay' comment in Jimmy's POV. But Ren's POV uses the word bi on-page when wondering about Jimmy), Bullying, Deceased family member (mother, died of breast cancer), Homophobia (comments, slurs, society, vandalism), Racist language, Self-harm (scrubs himself clean after kissing another man in public, has a breakdown of shame, brushes his teeth until his gums bleed to try cleanse himself), Xenophobia, mention of the recession/financial crisis/being in debt, Smoking (everyone besides Ren smokes constantly), Drunken nights, Drunken kisses, Internalized homophobia, Food (lots of food descriptions), and there is one scene where Jimmy falls asleep while they're kissing and wakes up after Ren stops kissing him ("Why did you stop?" "You were sleeping") which may be triggering for sexual assault.