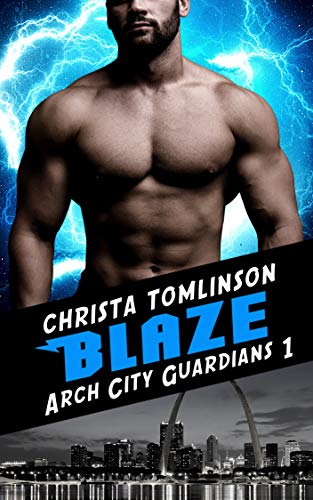 Fighting villains is easy. Falling in love is hard.

In the dark of night, Blaze wages war against St. Louis’s criminal masterminds. Once the sun rises, he’s Jordan Wells, quiet custom body shop owner. Jordan has accepted that it’s his destiny to walk alone in the shadows… until he meets Daniel, a sweet, untrained submissive. Jordan dreams of dominating the young man, of finding respite from his harsh life as a lone vigilante by losing himself in Danny’s loving submission.

Danny Griffin is thrilled to attend an exclusive D/s club, where he meets Jordan, an experienced Dom. Jordan appears to be the perfect man to help him explore his submissive fantasies. But Danny is also attracted to Blaze, the elusive hero who is always there when he needs him. When Danny discovers Blaze’s secret, he hopes that he can have the best of both worlds.

The passion between the hero and his lover is electric but Jordan knows that in order to keep Danny safe, he should let him go. Unfortunately, he can’t seem to tear himself away from his lover’s gentle smiles and soft kisses. Can Jordan risk a relationship with Danny when his life as Blaze is rife with danger?

Danny’s acceptance of the membership leads him to Club Decadence and meeting Jordan Wells. Jordan and Danny connect immediately, and the tall, dark, and handsome Dom seems like the perfect person to help Danny explore D/s. As time goes on, the bond between Danny and Jordan deepens, but Blaze is never far from Danny’s thoughts. For his part, Jordan finds himself unable to stay away from Danny as either Jordan or Blaze, breaking and bending the rules he’s had in place for years just to be near him. It’s not quite insta-love, but it’s definitely insta-lust and insta-connection. Jordan agreeing to be Danny’s guide into the world of D/s sets them off on a path where good literally battles evil, “stans” live up to the origin of the name (Y’all remember that Eminem song, don’t you?), secret identities are revealed, and Jordan’s past clashes with his present in a fight to determine his future.

That being said, there were parts of the book that didn’t work for me. First, and this is admittedly a me thing, there’s a couple of times where Danny’s “small hands” are referenced and it just came off...weird? I know it was to emphasize their size difference but yeah. It was awkward for me but YMMV.

Moving on to something that really matters, lol, I have an issue with the initial meet cute. It was exactly what you’d expect and executed to near perfection with the major exception of the, imo, unnecessary threat of rape. Danny’s situation is already precarious. He’s on the small side, alone on a dark street, accosted by three men and at least one of them has a knife. The stakes are already high, there’s no need to add in something as triggering as non-con as a plot point when it doesn’t enhance the scene or enrich the story (it’s basically never referenced again and Danny moves on like it never happened).

My next issue is that the main antagonist, Leon, only appears a handful of times and doesn’t have much of a personality beyond “bad guy.” There’s a “stan” who provides some drama but ultimately is a side plot that’s kind of predictable and feels a little like filler, and the same can be said for Jordan’s evil ex. I also wish that there were a deeper exploration of Danny and Jordan’s relationships with other people. I wish we’d met Jordan’s aunt because she plays a major part in why Jordan is a broody mountain of man pain. Danny’s bff Scott, Jordan’s cousin Nina, and fellow heroes Ignite and Caleb all piqued my interest and left me wanting more of them. As this is the first book in a series, I have pretty high hopes that I’ll get the chance to know them better.

Overall, this was a fun read with solid world-building, endearing characters, and a captivating central romance. If you love alphas fighting crime in the streets and putting it down in the sheets, I recommend you check it out.