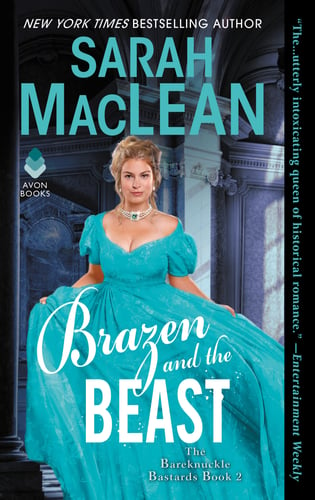 Review: Brazen and the Beast, by Sarah Maclean

Brazen and the Beast was one of those rare (for me) books that I inhaled in one day. While I loved Wicked and the Wallflower, this second Bareknuckle Bastards novel was even better. One of the most difficult things to accomplish when writing in a genre with established beats and a guaranteed Happily Ever After is consistent tension throughout the book. Brazen and the Beast had me guessing until the end just how this couple would work things out. Maclean gives workshops on writing conflict, and it's clear that she knows what she's about when you read a novel like this.

First, some context. As you read in the blurb, the novel begins with Whit/Beast trussed up in Hattie's family's carriage as she's about to set out for the evening... to a brothel. Her goal is to make herself unmarriageable once and for all because she wants to take over the family shipping business. Her terrible brother has gotten into a mess, stealing from the Bastards and generally being a useless wastrel. Hattie frees him and leaves, but of course he catches up to her at said brothel because he wants information on just who's carriage he was tossed into while unconscious. Oh, and she kissed him. They enter into an arrangement - he agrees to ruin her, she agrees to get back what's been stolen. Of course it's all more complicated than that and Beast wants to get to the real culprit not just get his money back. At one point, they agree to be rivals while simultaneously keeping to the ruination bargain? They're both rather delusional about the whole thing. Because obviously they're falling in love and it's all going to catch fire in one way or another.

The plot is rather too much to summarize here, but the balance between internal and external conflict is masterful. How can Whit get everything he wants while giving Hattie everything she wants? And will The Year of Hattie end in disaster? And just how much sex in the back of a tavern can they get away with?

As to that last bit, I think this is the filthiest book Maclean has written. I'd have to go back and re-read the others, but *whew* this was hot enough to melt all the ice in that ship's hold. Whit is a dirty talker, there's a scene where Hattie ties him to the ship's mast (with consent), and I swear Maclean was trying to torture us by dragging everything out for most of the book.

There's also a secondary f/f pairing, which I'm hoping turns into a novella at some point.

In summary - I loved it.

Suzanne received a digital ARC of this book but purchased and read it as an audiobook due to format issues. (Reading on an iPad isn't possible for this reader.)