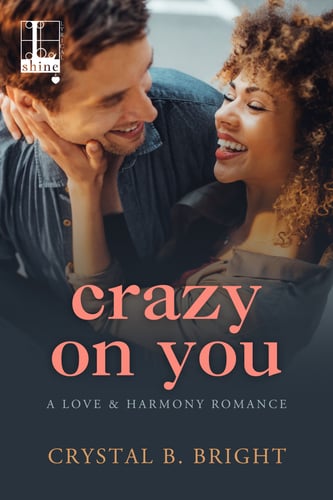 Shut out the noise and listen to your heart  . . .

Worse than a one-hit wonder, Tassia Hogan is a one-line wonder.  Infamous for a memorable, extremely provocative verse, her music career is going nowhere. Finding a decent man to date has also proven fruitless . . . they all think she’s as wanton as those lyrics. But now her label is offering Tassia the chance to shine—with a catch. The album is duets. Her partner is a Country Western singer.  And he’s just as reluctant to agree as she is.

Hyde Love has been in the music business since he was eleven, and he’s becoming more and more disenchanted with it. Collaborating on an album seems great in theory, but Tassia is an R&B singer. Melding their sounds and personalities will be difficult—though not as tough as keeping things strictly business. Getting involved with his partner could prove career-wrecking, yet discovering the real Tassia could be earth-shattering.

Review: Crazy on You, by Crystal B. Bright

Crazy on You is the third book in Crystal B. Bright’s Love and Harmony series where R&B divas start out collaborating with someone from outside their musical lane for purely professional reason but end up finding the type of love that had Jill Scott off to work, beaming all the way down 3rd.

In this installment, which works well as a standalone for those who haven’t read the previous books in the series, it’s Tassia Hogan’s turn to get boo’d up and her love interest is none other than the hottest thing in country music— and her former childhood crush — Hyde Love. To say that Hyde and Tassia have a complicated history is putting it mildly. They worked together as kids on The Ratty Rat’s Fun Crew but their careers have gone on wildly different paths since then. Tassia’s career isn’t exactly on the struggle bus, but it’s not where she wants it to be and it’s nowhere near the mega stardom that Hyde’s found. If you want a real world comparison for Tassia and Hyde, think of Justin Timberlake and Rhona Bennett from The New Mickey Mouse Club. Rhona’s done well but you can argue she should be much more successful given her talent whereas Justin Timberlake is... Justin Timberlake.

Professional jealousy and awkward childhood crushes aside, there’s also the teeny, tiny fact that Hyde’s team once refused to hire Tassia as a background singer for one of Hyde’s tours and that humiliation is something Tassia hasn’t forgiven or forgotten. Seriously, sis is stomping the yard in her petty boots and is not taking them off anytime soon. With all of that in play, you can imagine why Tassia is none too pleased when her record label informs her that instead of her long awaited solo album, they want her to record an album of duets with Hyde. Frustrated and feeling undervalued, Tassia agrees to the meeting, if only for the pleasure of turning Hyde and his people down to their faces.

For his part, Hyde isn’t exactly thrilled with the prospect either. He’s overworked and beyond tired of the grind. He’s desperate for a break but his father, who doubles as his manager, isn’t trying to hear any of what Hyde’s saying. Hyde’s nothing if not polite though, so he agrees to go to the meeting so he can decline the offer face to face.

But, because in Romancelandia the best laid plans of songstresses and superstars often go awry, Hyde and Tassia end up agreeing to the project for very different reasons. And at this point, dear reader, you will want Tassia to aim the pointy toe of her petty boots squarely at Hyde’s crotch and kick him. Hard. Repeatedly. Because his reason basically falls apart when you ask the question “Aren’t you a grown ass man, though?”

But anyway, Tassia and Hyde go on a writing retreat to work on the album and that’s where things really get interesting. Between the tension of both of them fighting their mutual attraction and Hyde’s guilt mounting, it isn’t long before Tassia finds out the real reason why Hyde’s taken her to the backwoods of Bumblefreak, Tennessee.  She doesn’t hold back and Hyde, realizing he deserves every bit of her ire, makes a sincere apology. After a mishap with a bear (yes, I said a bear) and a hilarious heart to heart with Hyde’s cousin Pepper, they agree to start over.

Once they’re on the same page, they quickly go from making beautiful music together to burning up the sheets. But like every good country song and R&B ballad, the course of true love does not run smooth. Tassia and Hyde have killer chemistry and get along great between the sheets, but can’t seem to keep the easy connection going when they have too keep their clothes on. There’s more than one misunderstanding and between Tassia’s pride, Hyde’s control issues and both of them saying one thing and then doing another, they struggle to hit any of the right notes outside of the bedroom.

And that’s where Hyde’s family comes in. Hyde’s hideaway is a stone’s throw away from his paternal grandparents and Mabel and Efrem Love, along with the aforementioned cousin Pepper, know true love when they see it and through a mix of good old fashioned truth telling and gentle encouragement, they guide the pair towards each other and help them find the courage to open their hearts to one another. Just when everything seems to finally be on the right track, Hyde’s insecurities derail them and Hyde’s father, Clever, turns up like a bad penny. With a mix of truth, lies, and videotape, Clever  threatens both Tassia’s career and the love they’ve managed to find. When Tassia runs home to her father, Hyde is left alone to confront his and in the process, we find out that Clever was a lot more than a “stage dad”; he was an emotionally abusive dad.

But Hyde isn’t a child anymore and he’s done being Clever’s victim.  Remember up there when I said that Hyde’s reasoning behind his actions fall apart when you ask “Aren’t you a grown ass man, though?” Well, with Efrem and Mabel backing him up, Hyde proves to us that the answer is an emphatic yes. While the Petty Betty in me wanted his takedown of Clever to show the man far less grace, Hyde finally shows his father that he’s an adult and that Clever isn’t running anything but his mouth.  And with that mission accomplished, he commits one swoon worthy grand gesture that shows Tassia, along with the rest of the world, just how much he loves her. The HEA is satisfying and there’s a sweet little epilogue that’s just the cherry on top.


For the most part, I really enjoyed this book. The characters are clearly defined and even when you don’t agree with what they’re doing, you generally understand why they’re doing it. Hyde isn’t perfect but his flaws come from places of real pain and he does finally get it together. Tassia likewise has her own issues to work through (I didn’t even tell y’all about the dude that she was wasting her time with at the beginning of the book. A MESS, honey. Just oh no, Tassia baby what is you doing?) and throughout the course of the book realizes Hyde isn’t the one who has daddy issues and sits her own, well meaning but way out of pocket, father down for a long, overdue talk. Hyde and Tassia are flirty and fun and while the pace of the romance moves fast, it’s completely believable give their personalities and chemistry.


Now, no tea, no shade, no pink lemonade, what frustrated me about this book was that there was a level of inconsistency to the characters actions that made me want to reach into my Kindle and shake them. They would say they weren’t going to do something and then immediately turn around and do the thing. Or they would do something so completely illogical that it was on some 2+2= banana type wave that I couldn’t get down with (looking at you, Hyde) and that happened more than once.


And while I wouldn’t say the slut shaming is heavy, it is noticeable. Tassia keeps reiterating she’s not “that” type of girl just because her biggest claim to fame is singing super racy song lyrics. Then there’s the way Hyde and Tassia assure each other that they don’t fall into bed with just anyone and the way that Tassia’s father seems to disapprove of her best friend, at least partly, because India is “that” type of girl. I’m not going to rehash the whole Cardi B. versus Ayesha Curry “type of girl” debacle that went down on Twitter in 2016 except to say this: A person can be either, neither, or a little bit of both “types”  and they still deserve love and respect. Period.


Even though Tassia and Hyde are an interracial couple, race doesn’t overtly play a major factor in their relationship. That said, there are some moments where it comes up and for the most part, I think it’s handled quite realistically. For example, there’s a point where Tassia is relieved that Hyde’s family has been so open and accepting of her because she wasn’t sure what she’d be walking into, given where they were (rural Tennessee). There’s also a part in the book where they sneak out to go to a drive in movie theater and Tassia is instructed to duck down so she can’t be seen (so she isn’t recognized)  and she asks “Why? Are we going through Klan country?” Some people may find these parts offensive or unrelatable but listen, as a Black woman who lives in rural Texas...I understood exactly where sis was coming from. Where the representation didn’t work so well for me was a part of the book  when Tassia and Hyde are arguing and she starts to ask him if he’s afraid his country fans will be upset about their being together and he angrily cuts her off and tells her not to make assumptions about people who listen to country music. Listen, Hyde, don’t make me read you like my name is Bianca Del Rio. While we aren’t going to say every country music fan has a klan robe in the closet, what we absolutely are not gonna do is pretend that wasn’t a valid af question. Him straight up dismissing her extremely valid concerns, and having an attitude while doing so, was not okay in the least and the fact that she just let it go and didn’t address it bothered me.


So, there you have it. The great, the good, and the things that made me go hmm. Overall, this was a good read for me and an excellent introduction to a new (to me) author. I plan on going back and reading the other two books in the series now.