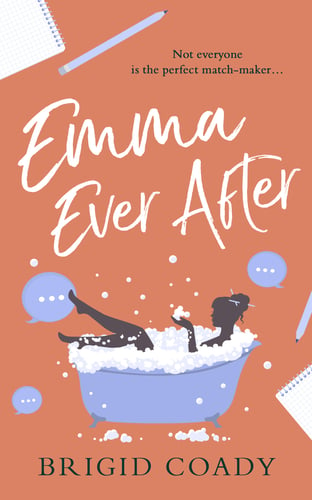 Emma Woodhouse knows the world loves nothing more than a celebrity romance. And, as a rising star at Mega! Management, she match-makes some of the biggest names in the business. Who cares if it’s all for show? For Emma, fauxmance beats the real thing any day!

But Emma has a huge task ahead. She needs to find fake girlfriends for every member of Breach of the Peace, the world’s hottest new boy band. Rich, talented heart-throbs, they should have their pick of the ladies – but, with band mates Will and Ed determined to undermine her every move, and her best mate Gee voicing disapproval about her chosen profession, Emma’s carefully ordered world begins to fall apart.

Is it possible that Emma doesn’t know best after all?

A new laugh-out-loud retelling of a Jane Austen romance, perfect for fans of Lindsey Kelk and Fiona Collins, from the winner of the 2015 Joan Hessayon New Writers’ Scheme Award.

Review: Emma Ever After, by Brigid Coady

Emma is a publicist working for a music management firm in London. She's in her late twenties and lives with her BFF, Gee Knightley. Gee is a former boy-band member who gave up his career when he refused to pretend to be straight. He's bisexual and another band member is gay, so it was a big deal to him. Emma has lived with Gee for 10 years, in a relationship they both pretend is platonic. If you're familiar with Jane Austen's EMMA, you know that Gee is George Knightley and how all that turns out.

The set-up is this: Emma is really good at her job, which is setting up fake-dating situations that boost both participants' careers. She has elaborate schedules and networks of contacts set up to ensure that these fauxmances are believable, and that they get covered in relevant news media, as well as on social media. She gets a big break when she's asked to set up four of the members of BOTP (a One Direction surrogate) in fake relationships before their US tour.

aI read this book like watching a car crash. Emma decides that Jamie (Jane in the original) is crushing on the wrong guy, so she tries to set him up with another man from the office. That man turns out to be straight and goes after Emma, instead. Not only does Emma have a terrible urge to meddle, but she doesn't even bother to find out if someone is gay before setting him up with another man? Hmm. She also fails to notice that (this isn't a spoiler) two of the members of BOTP are in a relationship with each other. The management company wants Emma to closet these guys. And, because she's oblivious, she goes along with it until it's made painfully obvious to her that she's been missing a huge detail.

1) Emma is kind of awful, right? She's in everyone's business, trying to fix things that don't need fixing, and making everyone miserable. This is true in both books. So, from the perspective of retelling EMMA, this is a successful book. If you like EMMA, you may very well like this adaptation.

2) But here comes my second review, the one where this book has to stand alone. I can't say it's an entirely successful standalone story, despite having a lot of things going for it.

I loved Gee. He's infinitely patient with Emma and I was happy to see them figure their stuff out and get together. The inside look (made up or no) at the celebrity publicity machine was fascinating. The writing is easy and funny, with some poignant moments that ground the narrative.

But. There's an odd feeling throughout the book as we watch a straight woman manage the lives of a bunch of gay men. Between the band, her coworker Jamie, and Gee (who is bi not gay), Emma is working really hard to closet some men, pair off another with someone he's not interested in, and keep Gee close to her. It begins to feel icky. Emma's not homophobic, just completely oblivious. She thinks she's helping all of them - Jamie with his love life and the band with their careers. So, again, Emma is a meddling monster in both books, but having all of the recipients of her meddling in this version be gay leaves a bitter aftertaste.

If some of her victims had been straight or women, I think the story would feel less off. Instead, there are three women I remember from the novel. One is her mother, a self-absorbed neglectful parent whose poor parenting has led to Emma's need to control everything. Another is Frankie, an obvious Taylor Swift substitute, portrayed as a man-eating she-demon who likes to play the victim. The last is Tina, the niece of one of the management company's bigwigs. Tina cons her way into the story by getting herself set up to fauxmance one of the BOTP boys and proceeds to be awful in every scene. In short? Every woman in this book is terrible.

Between closeting the gay boybanders for half the book and hating on all women... I don't know how to recommend this to any of my readers.